Nabi Sayeth: “We have been deceived” beginning with the Dallas “Proclamation of Deception!” 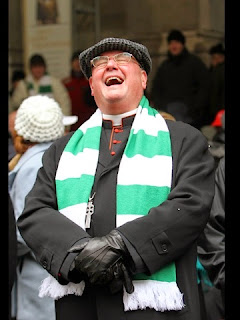 Nabi is exposing the evil in the Diocese of Wheeling Charleston, but no matter what diocese you live in, with rare if any exceptions, the same thing is going on where you live! They say Nero fiddled while Rome burned. How many bishops like the one pictured above yuck it up while they aid and abet the lavender mafia?

How many bishops are trying to figure out what to do about their “homosexual priest problem?” Not many, that’s for sure. My own bishop, John Keating had a heart condition. Was it just a coincidence that he died on March 22, 1998 the day after he asked in a Vatican meeting what he could do about his homosexual priests? His doctor spoke later to a meeting of the Arlington clergy about the bishop’s death and told them how strictly he warned the bishop about the dosage of his medication. Did someone deliberately fool with his meds?

According to a person who worked closely with Fr. John Hardon, that holy man believed Keating was murdered. It puts Archbishop Vigano’s going into hiding in another light, doesn’t it? Sometimes reality is stranger and more ominous than fiction. In the past few days we’ve seen a priest in Chicago, Fr. Paul Kalchik, himself a victim of clergy sex abuse, removed by Cardinal Cupich and ordered into psychiatric treatment. Of course! Anyone who confronts the demons in the chancery must be crazy, right?

It’s time for the laity to rise like the Catholics of the Vendee rose to defend their good priests during the French Revolution. Every homosexual in the Church, active or not, must be removed from any position of authority. Their disordered orientation makes the priesthood an occasion of sin! Pray for many Nabis in dioceses all over the country to rise up and lead the flock in demanding the purification of Holy Mother Church! Our Lady of the Rosary, pray for us!

Nabi sayeth….We all have been deceived by gutless, intentionally dishonest liars amongst the hierarchy with regard to the Catholic Church’s response to child sexual abuse. A few have spoken out very recently about the homosexual clergy  problem behind the sexual abuse scandal such as Bishop Morlino of the diocese of Madison, Wisconsin. But there is a real lack of credibility to his/their actions. For instance, Bishop Morlino has been a bishop since 2003...why is he JUST NOW speaking out? Is he not showing up a little late to the dance???

In June 2002 the bishops gathered in Dallas to sign the “Proclamation of Deception” aka the “Dallas Charter.” At that time, they promised before God, God’s holy people, and especially, THE MEDIA that they would take great measures to protect children under their care.

The attitude underneath the event was one of intentional deception. It was an attempt to throw some fresh grass and oats at the dumb sheep in order to placate and shut them up.
From this event programs were contrived to give the impression of a desire to protect God’s children. How was this effort deceptive?

1. The effort was motivated by the desire to CYA. Yes, it was intended to make those who wear pointed hats appear concerned, compassionate, etc.

2. It was a loss prevention measure. In other words, rather than acting out of love for our children, the desire was to save money by reducing the risk of lawsuits against those who wear pointed hats.

3. The “Virtus” program which emerged as a highly favored training program focused on the protection of children while at the same time ignoring an even greater problem: The sexual abuse of teens and young adults.

4. In a video that was required viewing for those who went through the Virtus program (especially lay employees and volunteers) a blatant lie was listed! One of the bullet points read explicitly: THERE IS NO CONNECTION  BETWEEN CHILD SEXUAL ABUSE AND HOMOSEXUALITY. The bishops’ own research concluded that 86 percent of sexual abuse acts are done by HOMOSEXUALS...male on male.

5. There was and is one, huge and most important flaw….in WV, the program was ultimately supervised by a My Lord of the Lavender Mafia and a FORMER Bishop who was a homosexual abuser himself. Or in other words, THE WOLVES WERE WATCHING THE HEN COUP. And,they reported that everything was deliciously fine.

Many years ago, Nabi had the privilege of studying Psychiatry under perhaps one of the world’s foremost experts, Dr. Paul McHugh. Dr. McHugh is an outstanding teacher and a most devout Catholic, a man of true faith. He loves the Church. Because of his reputation he was invited to be on the bishops’ National Sexual Abuse Prevention Board. Time would reveal that they used Dr. McHugh like an inexpensive hooker. Here are his highly emotional words:

“Why didn’t they tell us—trusted laity asked to lend our expertise—why didn’t they tell us about the supervisory nature of the abuse and especially the McCarrick situation?” “It’s got to be more than McCarrick who is held accountable but all of them, since it’s been revealed that all was not revealed. We, the charter members, were kept in the dark.”
“There were many priests involved and many children impacted, and this was mainly homosexual abuse of boys and young men.”

Throughout the country, and especially, in West Virginia, experts were invited to be on the sexual abuse prevention review board of the diocese and they generously offered their time and talent. But the bishop and clergymen in charge were dishonest in their monitoring and reporting to the board.

Nabi is aware of a correspondence sent by a chancery My Lord telling His like-minded clergy friends not to participate in the diocesan sexual abuse program. The My Lord himself refused to sign up for the required federal background check and encouraged his Lavender partners to do the same. He relented in time, however, and did so.

And then there’s another cover up issue….How many “Non-disclosure” agreements have been signed and how much hush money offered in payment for the silence of the lambs?
The Diocesan Attorneys Association which represents bishops around the country has long taken a “Them vs Us” stance against sexual abuse victims. At a recent parish meeting in Wheeling the parish attendees were repulsed by the “Them vs Us” thinking expressed by the diocesan attorney. In the thinking of the Diocesan Attorneys Association, it’s the hungry plaintiff attorneys and anti-Catholic media vs the bishop/Church. And while there is little doubt that the plaintiff attorneys can be quite piranha-ish, and the mainstream media has no love for the Church, but what about the raped and sodomized boys and girls and young adult males whose love and trust were crushed by the Lavender perverts and their clergy supporters and front men?

Just last week, four males in New York, sexually abused as children,  were awarded the largest payout in Church history: $27.5 million. By the end of this year, bishops will have paid out close to 3 billion dollars in sexual abuse payments. Think about this: If the bishops and their minions had kept their 2002 promise would they be paying out 3 billion? How many Catholic children do you suppose could have received a free education with that much money? How many of our nation’s poor could have been fed? How many of the unborn babies could have been saved from the cruel and painful, crushing death of abortion?

A BIGGER question and one that must be answered….HOW MUCH HAS THE DIOCESE OF WHEELING CHARLESTON PAID OUT IN SEXUAL ABUSE SETTLEMENTS? HOW MANY PIECES OF SILVER WERE USED FOR NON-DISCLOSURE AGREEMENTS...aka HUSH MONEY???

The people in the pews must stop paying out until which time they have the answers…
Let the diocese run itself on the 500 plus million dollars in the reserve fund until the answers are given for ALL to see....Stay tuned….
Mary Ann Kreitzer at 5:32 PM