Does This Describe Your Bishop? 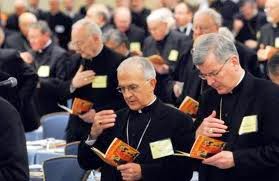 "Bishops must be pastors, close to people, fathers and brothers, and gentle, patient and merciful. Men who love poverty, both interior poverty, as freedom before the Lord, and exterior poverty, as simplicity and austerity of life. Men who do not think and behave like 'princes.' Men who are not ambitious, who are married to one church without having their eyes on another. Men capable of watching over the flock entrusted to them and protecting everything that keeps it together: guarding their people out of concern for the dangers which could threaten them, but above all instilling hope: so that light will shine in people's hearts. Men capable of supporting with love and patience God's dealings with his people. The Bishop has to be among his people in three ways: in front of them, pointing the way; among them, keeping them together and preventing them from being scatterd: and behind them, ensuring that no one is left behind, but also and primarily, so that the flock itself can sniff out new paths."
Pope Francis from "He is the God Who Is Near"
Address to the Coordinating Committee of CELAM
July 28, 2013
Posted by Mary Ann Kreitzer at 7:49 AM