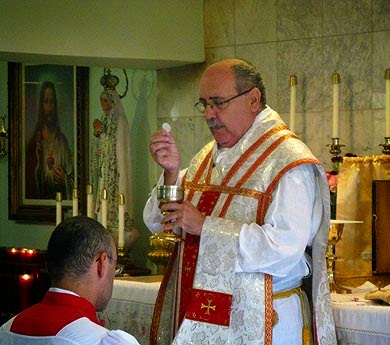 Why? Fr. Enrique Rueda spelled it out in his 1982 book, The Homosexual Network:

There is no question that one of the top priorities of the homosexual movement is to force a "redefinition" of the American family away from the traditional husband-wife-children model to a more "functional" definition based on the the notion of economic unit or any other basis that does not require heterosexuality as its foundation. The notion that a family must involve persons of both sexes is profoundly inimical to the homosexual movement. By their own definition, heterosexual relations are beyond their reach; thus the traditional family as a normative institution for human relations is unacceptable.
As early as 1970, elements within the homosexual movement had identified the family as inimical to its interests. At a convetnion in Philadelphia, the "Male Homosexual" workshop included the following as one of its demands: "The abolition of the nuclear family because it perpetuates the false categories of homosexuality and heterosexuality." (p. 221)

Rueda points out that the redefinition of the family began as early as the 1960s so that by 1970 the White House Conference on Children described (and even celebrated) a "pluralistic society of varying family forms and a multiplicity of cultures." The Conference defined family as "a group of individuals in interaction" and included varying forms such as nuclear families, "single parent," "communal," "group marriage," and "homosexual" arrangements. (p.222) [By this definition, the Cosa Nostra, Charles Manson's diabolical group, the Jim Jones cult, etc. can all be considered "families."]

Obviously, the attack on the family is nothing new. Homosexuals desire to destroy a model they can never imitate. It explains why they join forces with the pro-abortion, pro-contraceptive feminists who hate men and also want to destroy a family unit where they see the wife as a slave to her husband and children.

For anyone who wants to understand what's happening today, Rueda's book is must reading. Unfortunately, it's out of print and very expensive on the used book market. But it's invaluable for understanding how we ended up in the mess we're in, including how gay activists infiltrated the Catholic Church. The book and his orthodoxy got Fr. Rueda suspended by Bishop Matthew Clarke of Rochester, an enemy of the Church and an enabler of all things gay. Fr. Rueda ended up saying Mass for the SSPX in Florida. He was persecuted and marginalized after his suspension. He died in December 2009. Read more about this courageous priest here and pray for the repose of his soul. Everything he wrote about in his 1982 book has come to pass. He was a prophet for our time!
Posted by Mary Ann Kreitzer at 2:17 PM

I was able to read a copy I obtained through Interlibrary Loan.

Thanks for that suggestion. The book is out of the price range for most. I got mine from my mom's bookshelf when we were cleaning out her house. I thank God for it because it is an indispensable research tool! Thanks, Mom.