On Catholic Marriage and Faithful Witness 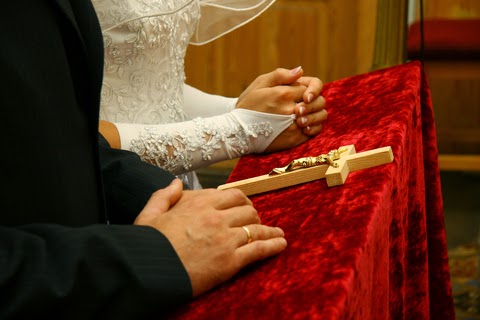 One of the reasons the family is in such a mess can be laid at the feet of wimpy Catholics who simply would rather pay respect to human feelings than honor God's laws. Some people fear the wrath of their children and friends more than they fear the Lord. And so they go along with what their children want rather than speak the truth in charity and let the children experience the consequences.

As our oldest children were reaching high school age we saw friends whose adult children were marrying outside the Church. We observed the dilemma and the heartbreak that accompanied it, and also saw many parents supporting their children's sinful decisions saying, "What are we supposed to do -- alienate our children?" The nagging thought in my mind was always, "Would you rather alienate God?"

Our response to this
was to start telling our children from a young age that if they ever decided to marry outside the Church, we could not go to their weddings. It would not be because we didn't love them, but because we loved could and could not celebrate a mortal sin. When one of our children contemplated doing it and we said we couldn't go to the wedding, we heard, "You don't love me!" I confess I was insensitive and laughed. "We've been telling you this for years." I could have added, "No...you don't love us, and even more sadly, you don't love God who loves you so much He died for you."  At any rate, the marriage never took place, the relationship, which was not made in heaven, broke up, and we later attended a beautiful Catholic wedding when that child married in the Church.

I thought of that as I was clearing off my desk yesterday (a task similar to Hercules cleaning out the Augean stables). I came across a bulletin article from 2010 sent to me by a friend in Pennsylvania. It was a follow-up to a homily preached by Fr. Edward Connolly on marriage. It presents clearly the duties of Catholics with regard to attending weddings. I found it enlightening and helpful and hope you do too. Marriage is under such assault in our culture today. It would be great if Catholics would avoid helping to undermine it.

Last weekend's homily prompted some questions from a couple of parishioners....In the homily I emphasized that we are obliged by God to obey the laws of marriage. In particular, I emphasized that a person must not enter into an invalid marriage union. In addition, I said that we Catholics must not participate in (attend) weddings that celebrate invalid marriage unions.

Someone apparently thought that I said that marriage ceremonies celebrated in Protestant churches are, ipso facto, invalid. But, of course, I said no such thing.

Without going into more detail than necessary, let me state a few simple points:


If two non-Catholics who are free to marry (i.e. were never married or are widowed) get married in the presence of Protestant minister or a Jewish rabbi or a civil magistrate, a Catholic is certainly permitted to participate in (attend) such a wedding. Why? Because the Catholic Church recognizes that such a marriage is valid.

If two Cathoics attempt to be married in the presence of someone other than a duly authorized Catholic priest (or deacon) and if they do so without a dispensation from canonical form, we must assume that this is an invalid marriage. Therefore, we must not participate in (attend) such a wedding. Why? Because, two Catholics must be married in the presence of a duly authorized priest and two witnesses.

What about a marriage between a Catholic and a non-Catholic? In such a case, the norm (especially if it is the bride who is the Catholic party) is that the marriage take place in the presence of a duly authorized priest (or deacon) and two witnesses. HOWEVER (and this is a crucial point) it is also permitted for the Catholic/non-Catholic couple (especially if it is the bride who is the non-Catholic party) to be married in the presence of a Protestant minister or a Jewish rabbi or a civil magistrate. In order for this to be accepted by the Catholic Church, the couple must apply (through the parish priest) for a DISPENSATION FROM CANONICAL FORM. It is my experience that this dispensation is readily granted. What is a "dispensation from canonical form"? Very simply it is this: It is a permission granted by the Bishop for a couple (one Catholic and one non-Catholic) to be married by someone other than a Catholic priest or deacon. (In most cases, in my experience, this "someone other" is a Protestant minister.) Is such a marriage valid? Yes! Is such a marriage recognized by the Catholic Church? Yes! Is such a marriage holy? Yes! Such a marriage has exactly the same "standing" in the Catholic Church as if the couple were married in the presence of a priest or a deacon.

Yours truly has participated several times in wedding ceremonies conducted in Protestant churches. I have also participated wedding ceremonies in non-religious settings, such as hotel ballrooms, in conjunction with rabbis. In all of these cases, the couple (one Catholic and on Protestant or else one Catholic and one Jewish) had received from the Bishop a dispensation from canonical form.

Having said all of this, I need to emphasize the main points of the homily: (a) We Catholics must not enter into invalid marriages; (b) We Catholics must no participate in (attend) weddings that celebrate invalid marriages. For example, suppose "Joe Catholic" had married "Jane Catholic" a few years ago in the presence of a Catholic priest (or deacon) but then he ups and divorces poor old Jane. Suppose, a little later on, Joe Catholic, without having obtained a declaration of nullity of his marriage to Jane, attempt to marry "Hilda Catholic" (or "Hilda Protestant"). Well, obviously, Joe cannot marry Hilda in the presence of a priest. (We Catholics take marriage seriously! You cannot take on a second wife unless you are free from your first wife, and you are free from your first wife only if she dies or if the Catholic Church declares that your marriage to her was null and void.) So, Joe and Hilda arrange to get married by Pastor Leroy, who has no qualms about performing marriage ceremonies for divorced persons, is not particular about religious affiliations or doctrines and is willing to marry just about anyone who says, "please".

Here are two important points based on this fictitious (but not preposterous) example: (a) The marriage of Joe and Hilda will NOT be valid, i.e. they will not be married in the eyes of God; (b) Joe Catholic's relatives and friends who give a hoot about their religion will not attend Joe and Hilda's wedding. One of the ways we honor marriage is by not honoring invalid marriage. But notice I did not say that we should ever be mean or unloving to Joe or Hilda or poor old Jane.

I agree with what you have said, but this is a subject that causes a lot of disagreement even among good Catholics. Indeed, even quite conservative priests will often advise people to attend invalid weddings of family members to "keep the peace". Sometimes the suggestion is made that one attend the Reception but not the wedding. But what does one do thereafter - the couple are not married, so in the years to come there could be more problems connected with that, e.g. they could not share a bedroom in one's home. Imagine the fireworks when that suddenly comes up! Then there is the problem of the couple that doesn't bother with any marriage ceremony, they just "shack up". The parents of said couple are told to keep their disapproval to themselves and treat the couple as if they are married. It all just gets uglier as new complications arise and children come on the scene. It is so much easier for parents to go along to get along. Who will tell them that sometimes adult children will cause a lot of suffering but God will give the grace to endure and the suffering should be offered up for the salvation of souls?

I agree. It is sad and complicated. What do you do about relatives who are in invalid marriages in terms of day-to-day living?

We resolve the problem by not inviting them to stay with us. It's unfortunate because I don't feel like we can go on trips with them where we would share a house. But as you say it is part of the suffering "offered up for the salvation of souls."

How do you reach out to the family members if they feel rejected by our actions ? Let's use the example of a civil wedding, with no previous marriage before. Jesus lived among the sinners, so should we. Let's not forget we are sinners ourselves.

We are perfectly happy to host a family gathering that includes the invalidly married, e.g. dinner and games, but we will not have cohabiting or invalidly married people overnight in our home sharing a room.

And I don't think you need to "preach" constantly to people in these situations. Once they know where you stand, that's enough. Then make your decisions accordingly. And, of course, always pray -- for the normalization of the their circumstances and your own charity in dealing with things.