Another Bad Sign from the Synod: the Hobnailed Boot for Reporter Priest! 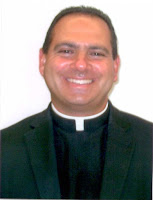 Remember all the talk about openness and transparency? That's what it amounts to --- just talk. Fr. Nicholas Gregoris got the hobnailed boot for daring to defend the faith against an Archbishop who made remarks that undermine doctrine on the indissolubility of marriage. Here's a bit of what LifeSiteNews reported about what happened next:

“They gave me no explanation,” he said. “[Press spokesman] Fr. Lombardi didn’t say anything to me. It was just two of his representatives.” He said it was “embarrassing,” especially given that he was wearing a Roman collar, and that it happened in front of colleagues....

“I don’t think the Vatican should act like the Gestapo, the politburo,” he added. “They’ve made a mountain out of a mole hill – they’ve made it worse.”

Father Gregoris also noted that several journalists had approached him after the incident and “thanked me for having the courage to say what I said.”

I thank him too! But Is anyone surprised that a press office run by Fr. Lombardi would do this? It's a miracle that any journalists are left at the Synod besides those coming from Crux and The National Catholic Reporter...oh, and the gay activist blogger.

I hope your praying for the Synod. I think we need a novena to St. Michael the Archangel. I can smell the smoke of Satan at the Sala Stampa from here. As for Fr. Lombardi and Fr. Rosica's "briefings," can anyone trust those two?

When my kids were in Catholic high schools being scandalized (and we paid big bucks for that?) I often told them, "Just because someone is wearing a roman collar doesn't mean he's telling the truth." Fr. Lombardi and Fr. Rosica illustrate that in spades!
Posted by Mary Ann Kreitzer at 4:25 PM

Openness and transparency...hmm... where have I heard that before? (cough)Obama(cough)

Kind of frightening how alike they are.