A Catholic's Voter Guide: It's Clearly a MORTAL SIN to vote for Hillary Clinton! 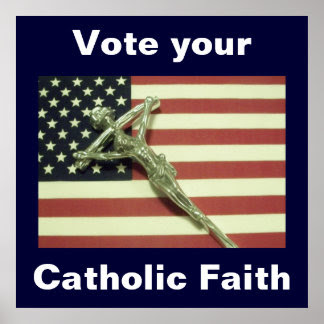 There's been plenty of chatter on blogs and Facebook, etc. arguing about what is moral and not moral in voting this year. Several of my readers have passed along this voters' guide from an orthodox priest with a doctorate in Moral Law and a legal degree in civil law. As you try to form your conscience to vote in the election in November, why not give this priest's opinion serious consideration. After all, you do want to make your decisions with a "correct" conscience, don't you -- and not one formed by the media or your own biases? It is clear from the principles here that voting for Hillary Clinton is a mortal sin. Not voting for Donald Trump who has promised to limit many of the evils supported by the Democratic party is to act like the "stupid Galatians" as Paul calls them. Can Donald Trump be trusted? We won't know unless we give him a chance.   We know Hillary can be trusted -- to do all the evil she's promised and more! Please don't be stupid in November. Even worse -- don't commit the mortal sin of voting for Hillary and the party of death! As for not voting, how is that being a responsible citizen?                                            Mary Ann

Voting Your Catholic Conscience
Fr. Anthony J. Mastroeni S.T.D, J.D.
Disclaimer:
This small piece is not intended to be a research essay in social ethics or political philosophy, but simply a clear and concise guide to the average Catholic on how to form a sincere but correct conscience in voting this November.

The observations here are not to be construed as promoting or endorsing any one political party or candidate, but instead to identify and parse out the fundamental moral principles and issues that confront a Catholic conscience in casting a vote.

Permit me to make 10 points:

To “sit this one out” and refuse to vote in the November election when the moral stakes are so clear and so high, the future direction of the nation so evident, is like “riding out Katrina” in your house near a levee on Lake Pontchartrain while refusing to take safe refuge in a school gym just because it doesn’t have all the amenities of a five-star hotel.

While the first part of the First Amendment-- i.e. its “Establishment” clause-- forbids the government to establish any state church or official national religion, the second part-- i.e. its “free exercise” clause-- was not intended to protect the state from the church, but rather to protect the church from the state; to allow every religion to express its views freely and publicly. It was meant to include not exclude the voice of religion from the public square.

While the “business” of religion is the saving of souls, this in itself necessarily includes matters of morality. And since there are no morally-free-zones in the business of legislating or politics, religion has a right to make its voice heard.

Without governmental protection against intrinsically immoral actions, the common good is gravely imperiled, and democracy left to face an uncertain future. As an old Russian peasant was heard to remark in 1917, “When the country forgets God, it builds its own gallows.”

“We oppose the use of public funds to perform or promote abortion or to fund organizations, like Planned Parenthood, so long as they provide or refer for elective abortions or sell fetal body parts rather than provide healthcare.” [p.13]
“We support the appointment of judges who respect traditional family values and the sanctity of innocent human life.” [p.13]
“We condemn the Supreme Court’s ruling in the U.S. v. Windsor, which wrongly removed the ability of Congress to define marriage policy in federal law. We also condemn the Supreme Court’s lawless ruling in Obergefell v.  Hodges…In Obergefell, five unelected lawyers robbed 320 million Americans of their legitimate constitutional authority to define marriage as the union of one man and one woman.” [p.11]

”We will continue to stand up to Republican efforts to defund Planned Parenthood health centers, which provide critical health services to millions of people.” [p.37]
“We will appoint judges who…will protect a woman’s right to safe abortion…” [p.25]
“Democrats applaud last year’s decision by the Supreme Court that recognized LGBT people—like every other American—have the right to marry the person they love. But there is still much work to be done.” [p.19]

Therefore, anyone who knowingly votes for a candidate who promotes such evils is a formal cooperator  in these evils, and consequently commits grave or Mortal Sin.

Moreover, not to vote for a candidate for whom there is a reasonable hope that such evils will be eradicated, or at least seriously limited, is also to be a formal cooperator in evil by omission, that is, not doing what we reasonably can do.

A word to those who persist year after year, mindless of seismic shifts that have taken place in political parties, voting the very same way their ancestors did: you do them no honor! If these same ancestors, though now dead and perhaps in heaven, now knowing what they knew not then, could make their words take flight, they would say something similar to what St. Paul told those Christians of Galatia, grown deaf and muted to the truth, and  stuck in pagan thinking, "O you stupid Galatians. Have you gone mad?" [Gal. 3:1]

Voting one’s conscience is like taking an oath. We ask God to witness to the truth that we are affirming by our choice of such a candidate. In Man for All Seasons St. Thomas More answers his daughter Meg and her fiancé Roper who are trying to convince More to simply say the words and swear the Oath of Supremacy, regardless of what it actually says, but personally meaning something else: “What is an oath then, but words we say to God? Listen, Meg. When a man takes an oath, he's holding his own self in his own hands like water. And if he opens his fingers then, he needn't hope to find himself again.”

[Fr. Mastroeni is a priest of the Paterson Diocese. He is adjunct professor at , does retreat work and spiritual direction, and holds doctorates in Moral Theology [Angelicum Rome] and Civil Law [, Nwk.] He offers the Tridentine Mass on Sundays at Our Lady of Victory, Harrington Park, N.J.]
Posted by Mary Ann Kreitzer at 7:30 AM

I stated weeks ago that voting for Killary, for a Catholic should be considered a Grevious Offence. I wrote it on the back of my collection envelope too.

It's likely a mortal sin also to vote for Trump and his racist / bigoted / arrogant ways. Pope Francis has directly critiques Trump and even said he is not a Christian.

Ernest, where did You get your doctorate in Moral Theology ?
Mr Trump is NOT a racist or bigot.

Trump has the enthusiastic support of minority leaders because they realize the democrats have failed them and only use them every four years for a vote.

DJT has quietly donated to more charitable causes than you can ever imagine.

Hilliary is responsible for the deliberate extermination of millions of innocent unborn children.

The Holy Father has NOT said Mr Trump is not a Christian. Please stop spewing the MSM's lies.