Whom Shall I Send?

People today are very wrapped up in a love of comfort. They seek safe spaces where nothing jars their self adjusted definition of right and wrong, or their lazy idea of meeting the challenges of a virtuous life, which often amounts to nothing more than “I’ll just be nice to people and accept them as they are.”

A perfect example of that attitude is this bumper sticker I saw two days ago. Notice the heart and the minor brushstroke symbol of a cross? What about that image says CATHOLIC? Yet this is a Catholic Church sticker. 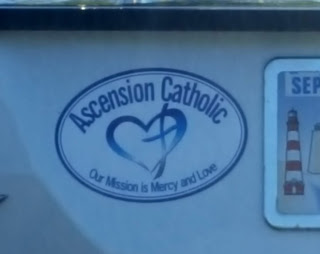 
Some of us with this kind of thinking could actually be more Protestant than some of our Protestant friends.

“You are my witnesses, says the Lord, my servants whom I have chosen to know and believe in me and understand that it is I. Before me no god was formed, and after me there shall be none. It is I, I the Lord; there is no savior but me. It is I who foretold, I who saved; I made it known, not any strange god among you; you are my witnesses, says the Lord, I am God, yes, from eternity I am He; there is none who can deliver from my hand; who can countermand what I do?”

If we are to be the kind of witnesses that God asks us to be, can we ignore those things God has commanded and the words He taught us when he was here on earth so that a gay coworker, or an atheist neighbor, or an abortionist advocating relative are not offended? Is it enough to simply be nice to them? What about a fellow parishioner who has convinced themselves that all we ever need to do is “love one another” thus never upsetting our friends and family with prickly conversations about politics and religion? Isn’t it our duty as witnesses to speak truth to evil even when it makes us less popular in a crowd? No doubt Christ was not worried about popularity when he called the Scribes and Pharisees hypocrites, a brood of vipers, who are not likely to escape the judgment of hell. (See Matthew 23:32)

Yet, if you explore the bulletins of Catholic Churches across the country you will find many examples of so called “ministries” and programs designed to lull people to sleep in their snug little self prescribed comfort zone where things are not so black and white, but a soft fluffy flannel sheet kind of cloudy gray. They are designed to make you feel good. Many fall under the umbrella of social justice ministries. Some fall under the guise of charity, but fall short because they fill only the belly and not the soul. Some pretend to be Catholic when the message they preach or promote has been stripped of all the dogma of the Church and bears little resemblance to what might have been taught a generation or two ago. Such a program was listed recently by St. John Neumann parish in Reston, VA. Their bulletin said:

EXPLORE THE ROOTS OF SALESIAN SPIRITUALITY

Join us for a six-week journey as we explore the foundation of Salesian Spirituality. ***** (name withheld here) will facilitate this introduction to Salesian spirituality using the book Authentic Devotion by Bernard Bangley. You may register for either morning or evening sessions. The sessions will meet on Tuesdays at 10:00am beginning October 3 or Thursdays at 7:00pm beginning October 5. All sessions will be held in the conference room. You can register through the website beginning September 5. Books can be purchased at the first session.

This sounds Catholic enough and many would be fooled into believing it is, until they discover that Bernard Bangley is a Presbyterian known for his “interpretations” of Catholic works carefully stripped of all that is identifiably Catholic.

Another example of watered down corrupted faith is this one, also at St. John Neumann:

CELEBRATE THE SEASON OF CREATION

From September 1 to October 4, Catholics around the world are praying and caring for creation. Pope Francis has declared September 1 as the World Day of Prayer for the Care of Creation. Please join us in kicking off the Season of Creation on Friday Sept. 1 by participating in the 9:00am daily Mass, followed by an outdoor prayer walk where we will honor God’s presence in His gift of creation. Many Christian churches have started celebrating the “Season of Creation” between that date and October 4, which is the Feast of St. Francis of Assisi

Well, golly gee, what could be wrong with that, you ask? Isn’t it strange that a Catholic church is asking people to leave the real presence of God in the Tabernacle to go outside and stare at a tree to find Him? If as they say, He can be found “in His gift of creation” then, I ask, why go to Adoration? Why seek sanctuary inside a Catholic Church? Why even GO to church?

Nature is proof of God and not God himself. He is not found in rocks and trees, or sunsets, however beautiful these creations may be. He is found in the Eucharist. And lastly, what difference does it make WHAT “many Christian churches” are doing? SINCE WHEN are Catholics to follow the lead of Protestant sects in anything? Maybe it just sounds like a “nice thing” to do, but it stealthily leads a person to think that if God is present everywhere then Holy Communion is not anything special. A follow up to this bulletin post the next week was the following under the same heading, “Celebrate the Season of Creation”:

“Take one hour away from electronics, and towards creation. Spending so much time in front of a screen weakens our bond with the earth. Today, disconnect from all electronics for 1 hour, and go outdoors. Spend at least 15 minutes in a safe space, and in silence. Observe what you see, hear, feel, and smell. Give thanks to God for the wonders of creation.”

Honestly, I never knew Catholics were bonded to the earth? And where in the Bible are we told to seek a safe space? Safe from what? And if the Church or parish is free to invent new seasons how long will it be until they decide to delete a few such as Advent and Lent?

We have a choice. We can “just be nice to people” and let them go on believing that the distortion of truth and the sin in their lives is perfectly ok with us, or we can be a real witness. John the Baptist lost his head by speaking truth to a sinner, so if you are going to be such a witness, you will no doubt be the target of attack by those who love their comfortable lives and are prepared to defend their safe spaces. If you are a bishop, you may lose your position. If you are a pastor, you may get yanked from that wealthy parish and sent packing to the lowliest of congregations. If you are a lay member of a church, you may lose friends and might even be asked to shut up, and maybe even to go away.

The definition of courage is strength in the face of pain or grief. Mental or moral strength to venture, perservere, and withstand danger, fear, or difficulty.

The question we must all ask ourselves is this: Will I find the courage to be a witness or will I wrap myself in the world and ignore doctrine, tradition, and truth? And if I do the later, can I still call myself a Catholic?
Posted by Chriss Rainey at 6:00 AM

I have a brother-in-law who several years ago at a family wedding told me to leave his wife (my sister) alone. Stop badgering her. One of my brothers and I were telling her she needed to come back to the Catholic Church. This brother-in-law said they didn't need to go to church; God was everywhere. But, I seriously doubt that they even think of God when they are outside or seek him there. They quit going to church years ago when they discovered that the youth minister in the Episcopal church they had been attending (my sister honestly believed that when she was going to communion there, that she was receiving the real body of Christ) was homosexual.

And I have a daughter who has told me to quit harassing the people on "Danica" Roem's FB page about their beliefs. Well, SOMEONE has to tell them where their thinking is wrong. SOMEONE has to try to plant a little seed of doubt.

This is Mary Fran, not Steve.

Our pastor gave a great homily this morning. He said that the job of a priest during the homily is to proclaim the Truth of the Catholic Church to the people. He said that many people complain to the priest because they don't like what he says and will leave the parish or even the Church if they hear anything contrary to whatever sin it is they're doing. As a result many priests are afraid to preach the truth, so they tell jokes, ignore Truth and gear their homilies to secular and popular attitudes.

I wanted to stand up and cheer but instead waited until after Mass and told him it was a great homily. True to form, in his humility, his answer is always as it was today. He points to heaven and says, "It's all for the Lord. All for the Lord."