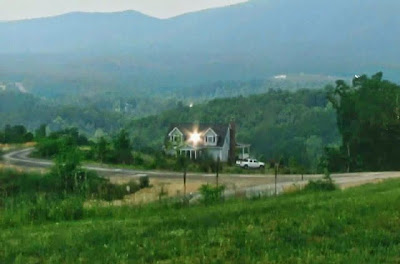 A dear priest who served the Diocese of Arlington well and faithfully died this afternoon. Below is the email I received from a fellow parishioner this evening. Father was a kind and dear soul. In December I reviewed his lovely book, Windows into the Life of a Priest. But the event I will most remember is a day of reflection Father gave for the Knights of Columbus and their wives. He shared a photograph taken of his home in Fort Valley. The room he used as a chapel was on the second floor in the exact spot where the "star" appears. The photo was taken on a cloudy, dismal day so there was no possibility of a reflection on the window of the room. Look at the picture and ask yourself where that wonderful light is coming from. Here's the article Fr. Lange wrote about the Eucharist that I originally posted with the picture. Dear Fr. Lange, rest in peace and intercede for we who loved you in this life.

I write to inform you that in God’s Holy Will, Father Robert Lange passed away this afternoon, and is now in Eternity, free of all physical suffering. His nephew in Richmond kindly notified me this afternoon, and he also shared an e-mail from his aunt (father’s brother’s wife); in reference to funeral arrangements, there are no details at this point, except that it will take place in the Arlington Diocese, in Northern Virginia. When I know these details, I will then notify you. The family expressed their appreciation for your loving concern, greetings and prayers for father throughout his illness. From father personally, I heard continuously, the assurance of the abundance of Grace he was experiencing in the midst of his intense suffering. He attributed this special Grace to your intercessory prayers, which allowed him to acknowledge that all he was enduring was an opportunity to experience God’s Infinite Divine Mercy in his soul.

I know that I speak for all who reside here at The Village of Mount Zion, and its vicinity within the Parish of Saint John Bosco, where we were blessed to have Father Trinkle and Father Lange come to live upon each of their medical retirement, as I express our gratitude to God for father’s dedication in his priestly ministry to us all. We were blessed to be able to share in his private Holy Masses, and always able to call upon him at any time, to receive the Sacraments of Confession and the Anointing of the Sick when necessary; truly, an unspeakable Gift from God through His priest.

As you well know, in the recent past, I had not sent out any further general information about father’s condition. Father had originally (last year, upon his initial diagnosis of cancer) given me this extensive e-mail list of all of you, whom he knew and who wished to be kept informed. I would then inform you periodically, upon his request. When he called me and we spoke, over a month ago, he asked me not to share any of the new particulars via e-mail, until further notice, to which of course, I complied; but now I know that he would allow me to do so. He told me then that the doctors had explained that the cancer had spread much and was pressing upon his colon, at which point there was nothing more they could do medically. He had grown weaker and in greater pain, thus it became more difficult for him to communicate. I then told him that I would await his calls or his nephew’s, rather than disturbing him with phone calls.

I will share now something very special and significant, which he did want me to say to all of you upon his death. He had hoped to write it as an addendum in his book, and had asked me to write it for him to send to the publishers, to be added and read by all in the future, in gratitude for God’s Divine Mercy at work in him throughout his illness. However, later on, when we discussed it, he became unsure, and asked me to wait. He wanted to make known that his prayerful wish was that after his death, he would intercede for all who are suffering and struggling with anything in their life, especially anything he described about his personal life, in his biographical book. Hence, above all, we now pray, as he would want us to do of course, for the blessed repose of his soul; but we ought to also ask him to pray for us all, for an outpouring of God’s Grace and Mercy upon our souls, as we continue mourning and weeping in this valley of tears, on pilgrimage toward our Eternal reward. Thank you, Father Lange, for your love and spiritual support, as a dear friend, but especially, as shepherd of our souls. May you now rest in God’s Holy Peace, in the Maternal Embrace of Our dear Blessed Mother, Whom you loved and honored so deeply. Please pray for us, as we pray for you, as God Wills, in the Communion of Saints!

May God bless each and all of you and Blessed Mother Mary guard you deeply within Her Immaculate Heart + + +
Angelica / Angie
+ + +
Eternal rest grant unto him, O Lord, and let perpetual Light shine upon him.
May his soul, and the souls of all the faithful departed, through the Mercy of God, rest in Peace. Amen
+ + +

Thank you for this....I met Fr. Lange at Our Lady of Lourdes when he had come out of retirement to serve again. He was truly an outstanding and outspoken priest. At times parishioners would walk out on him when he preached the pro-life message....and he would call them out on it! His kind are few and far between....he will be missed.