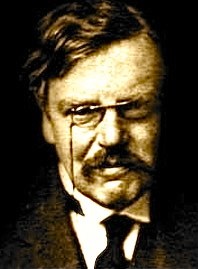 In honor of the day I offer a few of his incredibly insightful quotations. Each one is well worth a meditation. And all are as current today as when he wrote them, some over 100 years ago. If you aren't familiar with Chesterton, please remedy the situation immediately. The easiest place to start is with his Fr. Brown stories, but his biographies of St. Thomas Aquinas and St. Francis of Assisi and his collected essays are also good starting points.

I freely admit that some of Chesterton makes me scratch my head. I'm still trying to figure out what The Man Who Was Thursday is about. But even as I scratched my head over it, I found it an entertaining romp in the English countryside. So enjoy these bits of Chestertonian wisdom, but don't let them be you last!

From What's Wrong with the World:


“The Christian ideal has not been tried and found wanting; it has been found difficult and left untried.” – Chapter 5


“Fallacies do not cease to be fallacies because they become fashions.”

From A Short History of England:


“To have a right to do a thing is not at all the same as to be right in doing it.”


“The only defensible war is a war of defense.”


“Love means loving the unlovable – or it is no virtue at all.”