Are You the Cause of Turmoil? Why Not? 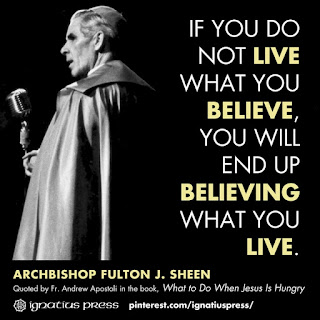 Most Catholics I know are very familiar with the expression, “Peace be with you.”  And most of us have the impression that we are to bring harmony to the experiences in our lives, in our families, in our careers, in our civic discourse.  We have given ourselves permission to be nice and not ruffle feathers.


Somehow we pass over the scripture text where Christ tells us living our faith and not just wearing the name badge may very well cause dissension in our own families and with our friends and acquaintances.  We are told to expect these conflicts and to prepare ourselves for them.


Jesus continues, in the next verses (37-39) by saying in essence this may cause you to battle even with your own self at times, but it is the only way if we are to be saved. 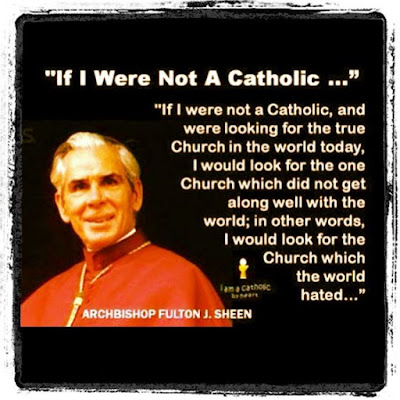 Each of us, to be followers of Christ, must give total obedience to the Gospel.  We cannot pick and choose the parts that are convenient for our own particular situation.  We can’t say doing this or that thing would disturb my family and disrupt my comfort zone, bringing unhappiness to those I love.  It is easy to believe this desire for peace is excuse enough to carve out self made exceptions for the trials in our lives.


I mentioned in a previous post that I recently was in the company of a man who said he was a “conservative Republican” and that as true as he was to that party platform, he intended to walk his daughter down an aisle to marry her wife.  (You read that right.)  He didn’t declare he was a Catholic, but he made this profession in the company of a group of people who call themselves Christians so I assume he pretends to be the same.


To be a Catholic there are indeed crosses to bear.  Sometimes the cross is to walk away from friends and even family members who refuse to embrace the will of God in their lives.  There are many instances in the Old Testament where accommodations were made to the pagans so life would be peaceful in their company.  Quoting from the book, Daily Life in the Time of Jesus, by Henri Daniel-Rops,


“For a Jew to take up a political attitude meant that at the same time he also took up a religious attitude, placing himself very exactly in relation to doctrine and practice.  Those who interpreted the Law in the most rigorous manner almost automatically set themselves among the nationalists, those who formed the ‘resistance’ to the pagan occupation; on the other hand, those who were more easy-going in religious matters were also less difficult with regard to the Romans.  It may therefore be said, in a very general fashion, that the religious sects into which the Jews were divided corresponded more or less to what we term political parties.  The Sadducees, who were drawn from the old aristocratic families, the wealthy, the priest and the officials of the Temple were on principal in favor of the established order.  Ever since the Hellenistic period they had been considered as people who were resigned to the occupation; this made their opponents regard them as traitors and as half-infidels, demi-pagens, although they might have said that their attitude had a firm religious basis in the concept of Jewish universalism.  (a topic on which I should expand another day, but not here)


The Pharisees, who prided themselves on being more pious than all others, more zealous, better versed in religious matters and the most rigid interpreters of tradition, considered themselves the heirs of the Maccabees and the true guardians of their heroic nationalism.  Politically, therefore, they were most bitterly opposed to Rome.


Today, we too are “occupied” in many instances, by “Pagan forces” that persecute us for our beliefs, ridicule our traditions, mock our backwardness to the modern world, and work to destroy a parent’s right to rear their children according to the demands of a virtuous life. 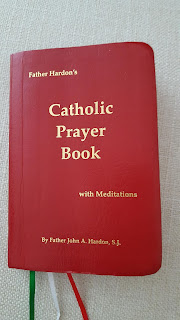 I recently talked my pastor (with very little persuasion) into letting me have a copy of the prayer book given to each of the Confirmation candidates last May.  It is titled Catholic Prayer Book with Meditations by Fr. John A. Hardon, S.J.  The beauty of this little leather bound treasure, I find, is in the lessons it contains on how to live a Catholic life faithfully and to the fullest extent without flimsy excuses.


This past Sunday before Mass as I sat in the pew, I opened this book to a random page that included a section with the subheading:  Confidence in God.  One of the several things it says made me laugh both inside and out, though I kept it at a soft chuckle.


“We can do nothing that is pleasing to God without throwing the world into confusion and creating a turmoil in hell.”


Thank you, Father Hardon.  I needed that.


Think about it long and hard.  Are you one of the many who just don’t want to make waves?  Are you “with the world” because it is easier, or is there a cross on your back you are willing to bear for love of Him?

This is great, Mary Ann!

Wish I could send you a pic of the front of my Fr. Hardon prayer book. (alas, I still have a dumb phone - no smart phone for me!)

You can read Fr. Hardon's name at the top and bottom, but the middle part is fairly well faded out. (I love, love, love this prayer book)

Check your email - I am sending you info from a homeschooling mother regarding making reparation for the abuse scandal.