The Nabi Sayeth: Expose the Scandals! 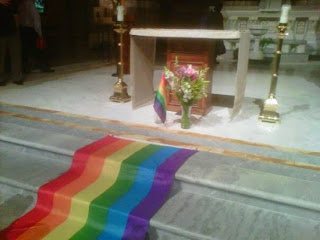 Every priest described here should be named and removed! Sadly, what Nabi describes has been the M.O. of numerous U.S. bishops for decades. Hide and cover up for the perverts and let them go on destroying the people of God. These vultures need to go and, as Nabi says, the laity need to demand it. We’ve known the truth for years now. Fr. James Haley tried to do something about it 15 years ago in the Diocese of Arlington and was crucified by Bishop Loverde and his own lavender mafia. Demand the truth! Not just in West Virginia, but in every diocese in the country! Get the lavender/rainbow boys out of the sanctuary (and the schools, and the rectories, and the chancery, and the priesthood)!

Nabi has been asked by good and faithful Catholics, Jews and Protestants as well: Is there a coverup in West Virginia as we have heard about in PA and other places?

Nabi sayeth, But of course! And very likely in a place near you.

Some  examples will enlighten:

1. In the 90’s a clergyman was caught up in a sting by State Troopers after it had been reported numerous times that the clergyman had been soliciting men so that he might perform oral sex on them (not for money, but gratis) at a truck stop at an exit of I-79. The clergyman was arrested and bonded out. For his punishment he was sent off for “treatment” and then subsidized by the diocese to obtain a Master’s degree in Counseling from WVU. After it was discovered that the clergyman was saying masses at parishes around the diocese, once again, a good soul reported the incident including documentation to the Papal Nuncio in DC. The nuncio simply sent the correspondence to the FORMER bishop and the clergyman continues saying masses.

2. At this time there is a clergyman who is pastor of a parish with a Catholic grade school and high school who has a fascination with the work of an “artist” named Philip Gladstone. Gladstone is popular amongst members of the male homosexual community. He paints teen-looking and young adult male nudes. One picture in his elaborate collection features Our Lord dying on the cross, fully naked and with hot air balloons lifting off all around His cross on Calvary. This clergyman was reported to the Papal Nuncio along with documentation of twitter communications of the clergyman with other adorers of Mr. Gladstone’s work. The response? The communication was sent to the FORMER bishop, the clergyman was promoted to vicar of his vicariate and made a My Lord. Isn’t that SPACIAL!!??

3. Back in the 80’s while founding pastor of a parish in southern WV the pastor had referred to him for “counseling” (by the priest who works out of the chancery as the counselor of clergymen for the diocese and who is himself an avid supporter of homosexual causes)  a young man just two weeks into his 18th birthday and who was mildly mentally handicapped. The pastor took the man into the rectory, got the young man intoxicated with wine and forcibly sodomized him. This happened on two separate occasions. The pastor offered to resign over the rape but the bishop at the time would not accept his resignation. Money was given to the young man for counseling (hush money) and a non-disclosure agreement was signed by the victim. The clergyman recently retired after spending years in a steel mill town at a parish with a Catholic grade school.

4. There is a Filipino priest who at the turn of this century was stationed at a parish way down south on the Virginia border. He was offering to give some of his teen-aged male parishioners alcohol back rubs. And no, in case you are wondering, the clergyman is not a physical therapist! Some parents complained to a late bishop of the diocese who transferred the clergyman quickly. Several years later the alcohol back-rubbing clergyman would end up in a steel mill town where he became pastor of a parish with both a Catholic grade school and high school. He was transferred somewhat recently and is now at a parish in the Capitol city with a Catholic grade school.

Yes, of course and tragically so, there are coverups in West Virginia. The victims had their faith robbed and raped from them. With a closed system in a diocese controlled by homosexual clergyman there are and always will be coverups. That’s why sociologists call them the Lavender  Mafia.

What can you do? The pope and all Church leaders had better get their mitres out of their rear ends and wake up. LAY LEADERSHIP, LAY INVESTIGATION, LAY MONITORING are the only way this nightmare will end. JUDAS and his friends must go….NOW!!! Clergymen must, finally, especially the My Lords and bishops, learn to live just like Jesus. The laity MUST settle for nothing less. More to come….
Posted by Mary Ann Kreitzer at 3:05 PM

Lay leadership and lay investigation sounds nice, but rmeember the SJW of the left pretty well run everything at the parish level, maybe because the rest of us have jobs and families to care for.
And many of then are ex nuns who hate the church and love feminism.