A Principle As Novel As It Is Wrong 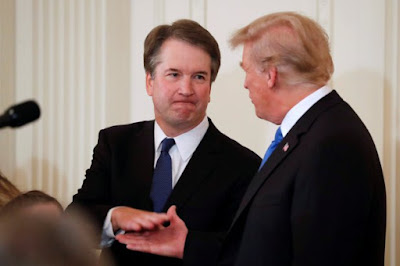 Trump supporters of all stripes were praising to the hilt the nomination of Brett Kavanaugh on Monday evening after his brief acceptance speech in the East Room of the White House.  I don’t know Kavanaugh and maybe people like Laura Ingram are right when they say he’s a stellar choice.

I just remember the powers that be in the Republican Party said pretty much the same thing about Justice Roberts, who when given the chance, twisted himself into a pretzel to find cause to leave Obamacare in place, redefining a government run health care program a “tax.”  Now we are told that it was Kavanaugh who came up with this brilliant concept.


Life Site News reported a story, which included information from Edith Roberts at SCOTUS blog (which I know nothing about so can’t say what I think of what they report) that said,


“Roberts called Kavanaugh’s position in Garza v. Hargan, about whether illegal immigrant minors have the right to a government-facilitated abortion on U.S. soil, ‘conservative” but noted he “did not go as far as one of his colleagues.’ ”


This comment was in reference to a case involving a minor illegal immigrant who while in custody requested an abortion paid for by the U.S. government.


“Kavanaugh wrote a panel decision vacating a district-court order that required the government to allow the teen to leave the detention facility to obtain the abortion; the panel imposed an additional waiting period to give the government time to obtain a sponsor. The en banc court reversed. Kavanaugh dissented, arguing that the en banc ruling was “ultimately based on a constitutional principle as novel as it is wrong: a new right for unlawful immigrant minors in U.S. Government detention to obtain immediate abortion on demand.”


In these remarks, I find a ray of hope, but it is only hope at this point and falls short of total confidence.  I see in this phrase “a constitutional principle as novel as it is wrong” a person willing to speak the truth and recognize error, calling it what it is.  What I don’t know at this point, and who can really, is whether Kavanaugh is a man who just loves to argue the impossible in the tall weeds of our legal system or if he has a calm and rational understanding of right versus wrong that will prove to exist when the difficult choices are placed before him.  I want a justice, rare though he may be, who can look at a case, a situation, a concept, a premise and say THAT is right or THAT is wrong.


What I don’t want is a judge who just tries to make the most people happy by saying things that sound good and make sense to the fool hearty among us.


Overturning Roe v. Wade is going to take more than just pulling another rabbit out of the hat.  We will need justices who can say this law is “based on a principle as novel as it is wrong” and never mind the fallout.  Oh, there will be plenty of hemming and stammering around for a compromise to keep everyone happy, prevent a civil war, and curb the riots and burning of cities that very well could occur, but what we can’t settle for after nearly fifty years of waiting for sanity to return is a ruling that ends up not settling the argument.


People are bailing out of California now because of the lawlessness and stupid regulations there.  They are flocking to other states with more favorable laws.  New York is losing residents and so is Connecticut because of their ridiculous taxes and social welfare programs.  We may never get state laws that perfectly mirror what the Catholic Church teaches, but surely we can come close in a few, which will set a new standard for the country at large.  The problems Roe v. Wade created and what it has meant for all of us won’t just disappear even when it is overturned, which I believe it will be.  It will have to be slowly unraveled, state by state, prayer by prayer, sermon by sermon, statute by statute, and example by example.  The morally degraded condition we find ourselves in today didn’t happen overnight and we won’t recover without working at it over time.


We may see in the future an Electoral College map very different from what it is today.  Sparsely populated states today may become filled with like minded people when the state they live in has failed to adopt moral laws that respect the life of all persons, born and unborn alike.  Over time people have flocked in great numbers to different regions mostly for economic reasons.  We can be sure where there is God and where He is honored, there will be prosperity.  So if you think this nation is divided now, just wait.  To change the nation we have to change the behavior.  To change the behavior we have to stop enabling evil to exist.  To end the enabling we have to change the law.  To change the law we must stay alert, be informed, vote, and last but not least by any means, we must continue to pray.  Pray without ceasing.
Posted by Chriss Rainey at 6:30 AM

Learn from history. Pass an abolition amendment before the civil war this time.