What magazines are on your coffee table? 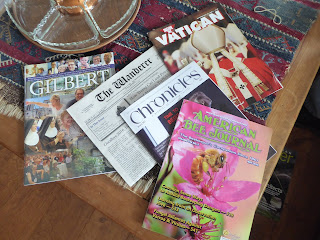 I subscribe to a number of magazines and newspapers -- too many in fact. And so, along with my book purge, I'm making decisions about which periodicals to give up and which to keep. At the top of the "keep list" is Chronicles.

I love that magazine! Even when I'm reading an issue that's been hanging around for months, I find great food for thought. I'm catching up with the October issue (lots of pre-election commentary) which was buried on my desk.

In an article by Chilton Williamson I found this spot-on description of modern liberalism:

Republicans and Democrats increasingly have no shared basis at all -- indeed, they are nearly separate species. And the explanation for this almost unbridgeable chasm is not the intransigency of a "reactionary" party. It is that modern liberalism int he last few decades, represented by roughly half the American people, has simply got up and walked away from the other half, from the historical America, from human reality, and from metaphysical truth. Those whom James Kalb [author of the Tyranny of Liberalism] calls "advanced" liberals deny that America is really a country at all, that the American people have an historic identity, and that marriage is exclusively a heterosexual institution; they affirm that the nuclear family is constrictive, outmoded, and humanly unnecessary, that sexual differentiation is a matter of preference and identity rather than of biology, that morality is a relative concept, that theism of any sort is irrational, that all religions (but Christianity in particular) are aggressive and oppressive, that men are capable of self-creation and self-perfection, and that, consequently, man is the measure and the meaning of the universe -- and demand that lesser mortals humbly accept their absurdist propositions and the consequences that follow from acting upon them.

Wow! A one-paragraph summary of the state of our sick modern American culture sunk in liberalism. Williamson doesn't give us the cure in his article, but points to a source who does, James Kalb. I haven't read his book but hope to. Although I think the answer is found, as most are, in the doctrines of the Catholic Church.

A book I do recommend, if readers want to really understand the evils of liberalism, is Liberalism is a Sin, written by a Spanish priest and published in English in 1899. It's one of those books that one reads, re-reads and uses as a reference. It's a short paperback and clear as a bell. It shows how liberalism is the absolute antithesis of Catholic doctrine in one paragraph:

I hope you have magazines on your coffee table next to some great books (Many people don't read anymore sad to say). And I hope the magazines on your coffee table enlighten your mind and heart and lead you closer to the Lord. May they help to move your intellect to a more intimate knowledge of God and his laws and move your will to a more intimate love of Our Lord and Savior Jesus Christ, His Mother Mary, and all his close friends, the saints and angels.

Our Lady, Seat of Wisdom, pray for us.
Posted by Mary Ann Kreitzer at 12:17 PM

Loved “Liberalism is a Sin” as did my husband. I have unsubscribed to many magazines that I can get online but still have too many coming in the mail with not enough time to read! I would never give up "The Wanderer.” Nor could I give up Fr. Stravinskas “The Catholic Response, or “Catholic Answers” or “New Oxford Review.” I’m like you - catching up several months after the issues are published! I have never read, nor been solicited to read “Chronicles.” Will have to check it out.

I have thought about reading that book, too. The sad thing is, today that priest would be seen as a "rigid radical." This book should be given out for free to all of our clergy. Today, many of them do not believe this! And, hasn't liberalism, as an ideology, been condemned by past Popes? Isn't that why this priest wrote about it? Am I correct? Another thing bad about the Church in our day is that we have fallen in many instances for "magisterialism"; that is, only believing in the things that have been proclaimed today, and ignoring the things that have contradicted these proclamations in the past (i.e. Limbo, even though the theological commission that has said it probably does not exist has no authority whatsoever). Today, the Church would likely deny (or, at least, severely downplay) the reality that liberalism is a sin, but the Church of the past, I would imagine, knew this and proclaimed it, clearly seeing the connection of liberalism with the heresy of Socialism. https://thegodinthecave.wordpress.com/2013/11/08/magisterialism/