Can We Disband the Circular Firing Squads...Please? The Shameful Attack by James Hitchcock on The Wanderer 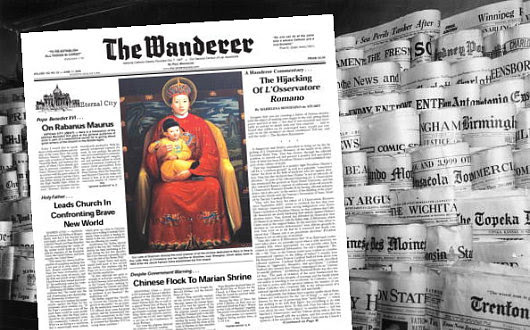 My friend Dexter Duggan writes for The Wanderer. He lives in the Southwest so he experiences first-hand the devastation of the illegal invasion along the border and often explores the impact. I always look for Dexter's articles because he is insightful, but always charitable in his criticism of policies that are destroying our national character and threatening our safety.

So I've watched with alarm the attack on Dexter and The Wanderer by Catholic historian, Professor James Hitchcock, and, frankly, I find it baffling. It isn't anything new though. Chris Manion, another Wanderer contributor, addressed the issue in 2007, the 140th anniversary year of the paper, after Hitchcock attacked The Wanderer in the Human Life Review. Manion, who admired Hitchcock's work, interviewed him and The Wanderer gave the professor 3,000 words on the front page to express his concerns. What was his response? A year later he went after The Wanderer again with some specific swipes at Chris Manion. Just goes to show, no good deed goes unpunished.


And now Hitchcock has written a book, replete with errors, continuing his shameful attack on The Wanderer and on Dexter Duggan in particular. In the interests of full exposure, I haven't read Hitchcock's book and have no intention of doing so. Why would I? I've seen how he treated Chris Manion and The Wanderer in the past and I've read Dexter's articles addressing the errors and omissions in his book that give a fun-house mirror reflection of "facts." For someone who is a historian to do it is truly shameful.

With thirty-five years in the pro-life movement much of it in activism, I've been the target of hit jobs in newspapers (and even a book) over my pro-life activities. I have no intention of reading Hitchcock's hit-job on fellow Catholics who deserve respect even if one disagrees with their perspectives.

I have never met Professor Hitchcock, but I used to admire his work and I certainly admired his wife Helen Hull Hitchcock, whom I did meet on several occasions. Helen founded Women for Faith and Family; she also founded the Adoremus Society and edited the Adoremus Bulletin that did so much to hold the ground on the sacred liturgy during the worst of its desecration and continues to do so today. I mourned with others when Helen died in 2014. Her graciousness apparently did not rub off on her husband.

According to Dexter, "Professor Hitchcock never even contacted me to ask if his thoughts were accurate. This isn't some fast news story he wrote but a supposed careful historical work."

Hitchcock apparent malice is a head-shaker. Why? Chris Manion and Dexter Duggan are both honorable men. I would have expected Hitchcock to be one as well, but his targeted attack on the two writers and The Wanderer belies that expectation.

Well, who can ever explain malice except as a work of the one who was a liar and murderer from the beginning. He loves to set good people at each other and all the circular firing squads over Donald Trump, the consecration of Russia, TLM v. Novus Ordo, etc. illustrate how successful he is. It truly is sad. People should be able to engage in debate over prudential disagreements without being at each others' throats. I urge you to read Dexter's responses to Hitchcock's book here and here. Hitchcock's hit job on an excellent Catholic publication and its writers deserves a rebuttal.

I want to publicly thank The Wanderer for informing me personally about Catholic truth, for its publication of Church documents and the pope's weekly audience homilies, for its excellent columnists defending the faith, and its great coverage of the Church in America warts and all. If you'd like to subscribe to the print edition, go here.

St. Barbara, patroness of artillery men and St. Joan of Arc, patroness of soldiers, please intercede for an end to the circular firing squads in the Church.
Posted by Mary Ann Kreitzer at 11:00 AM

I met the BRILLIANT Dexter Duggan one time at the CMC Dude Ranch meeting. My memory of him is that he was gracious and kind. My daughter rode with him to the airport to pick up some CMC members arriving for the meeting and afterwards, totally impressed with Dexter, she said he had told her all about how he'd become a journalist. That kindness to my daughter stuck in my mind all these years so whenever I read his articles that memory flashes before me.

I haven't read what James Hitchcock said, but if I would happen to catch a whiff of something that someone wrote saying Dexter was erroneous or putting him in a bad light (he's kind of perfect in my mind) I wouldn't believe it. I would know something was wrong with the writer and not Dexter.

I'm not familiar with him.

We went to school with Dexter Duggan. His brilliance, decency, and authenticity were beyond
top-notch. If only the two of us could be like him.
Willard Earl Kissinger
Joseph James Downs

Couldn't agree more, Joseph. His articles in The Wanderer are my first go-to pieces! He is truly a Catholic gentleman. And there are too few of those these days.