Headlines about Daily Life in Looney--Tune Land beginning with THE BOOK!

I'm looking forward to reading From the Depths of Our Hearts co-authored by Pope Benedict and Cardinal Robert Sarah. The english translation release is coming out in February from Ignatius Press. I've already put in my order and can't wait to read it! Meanwhile, it's caused a real firestorm in Rome and elsewhere, particularly among "progressive" Catholics. 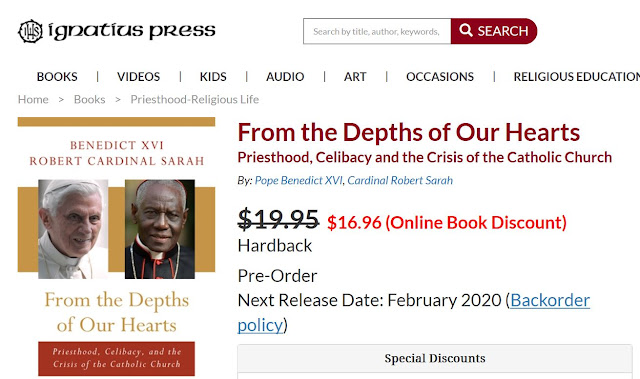 When the Church is filled with loonies to the very chair of Peter, we can expect to see internecine warfare and  suppression and manipulation of the truth. Satan's mouthpieces and cronies, many of whom live in Rome and occupy curial positions where they smile and lie are busy as termites chewing up the truth and spitting out lies. We see the lies continuously these days with regard to anything involving Pope Benedict. The smiles? Well....we're not seeing them so much. As a matter of fact, the rage over the impending publication of the Benedict/Sarah book is so overboard it caused Cardinal Gerhard Mueller to say:

It is brutal when in the name of the bishops – and on a website funded by them – such obscene articles are being commissioned which demean personalities like Benedict XVI as not even the most ignorant enemies of the Church would venture to do it, for, they still have more respect and decency.

Fortunately, all the negative publicity is just boosting sales of the book which isn't even published yet. It's already a #1 best seller on Amazon and I ordered my copy from Ignatius Press!

Pope Benedict surely needs protection. Pray for the intercession of Cardinal Mindszenty for him. It appears he is a prisoner of the Vatican under the control of his personal "guard," Georg Ganswein! Note the description in the Vigano article (linked below) calling Ganswein "the gestapo."

Do you  really believe that Benedict called for a change to his co-authorship of the new book? Uh...yeah...just like he endorsed Pope Francis's theology series!

Consider all the nefarious actions relating to Pope Benedict. Check out the doctored photo claiming Benedict endorsed the Francis books! Anytime Benedict departs from the scripted role he's called to play by Vatican thugs, they immediately go to the spin! Poor doddering old Benedict has lost his marbles and is being manipulated by.....(Fill in the blank.)

Do they really expect us to trust those guys who occupy (or used to occupy) the Vatican media office: Fr. Rosica the plagiarist, Msgr. Vigano (no relation to the archbishop) responsible for the doctored photo, James Martin, S.J. liar extraordinaire, etc. ad nauseum? We've got your number, boys!

It's pretty clear that Benedict, whose body is frail, has a mind like a steel trap. He bypassed the Vatican media office to release his letter on sex abuse last April. It was published in a small Bavarian periodical for priests, but an excellent translation in English was released simultaneously, removing its interpretation (and spin) from the compromised German church.

If you haven't ordered the Benedict/Sarah book, do so immediately. The truth needs to be shouted from the housetops! It will be first on my reading list when it arrives.

See more on the book controversy at these sites:

Pope Benedict’s publisher stands by listing him as co-author on new book defending priestly celibacy. Two thumbs up for Fr. Fessio for not planning to alter the co-authorship of the book!

My guess is that Fr. Fessio (perhaps Fr. Pacwa as well) are hated by the lavender Jesuits. What can they do to Fessio that they have not already done? Isn't he retired of sorts? May he continue to stand his ground, the high ground.

....Harvey [James M. cardinal] then added that at the beginning of the Pontificate, Benedict XVI, pointing at him [Gänswein] with his finger, exclaimed, "Gestapo! Gestapo!*"
This behavior of B16 reveals an amazing lack of seriousness of a man holding the Office of Saint Peter, as well as the lack of consistency. If B16 noticed Gaenswein's abuse of confidence, he should immediately throw him out. Another factor aroused here: the personal emotional bond turned out to be stronger than the duties towards the Holy Office. Bishop Joseph Raztinger apparently was enchanted by the young German cleric in a well-cut cassock. B16 seems to be susceptible to blackmail.
*Geheime Staatspolizei - Secret State Police in Germany in 1933-45. Is Archbishop Georg an agent of some secret police?

I'd like to call a time out on the Gānswein pile-on. Despite Abp. Vigano's apparent dislike for him which is troubling, what Harvy told him ("Gestapo! Gestapo!") is still a matter of hearsay. I read that over 20 years ago Gänswein was chosen to replace Harvy in the service of Cdnl. Ratzinger, so isn't it possible there's some resentment involved here? How grossly out of character for Pope Benedict! Regardless, we have all witnessed, for decades, without hearing a word of criticism from anyone, the affectionate and tender service rendered by Bishop Gānswein toward Pope Benedict. Perhaps it's true that Papa Bergoglio did have a screaming meltdown directed at Gānswein demanding BXVI remove himself from this book, and Benedetto upon being told of it did instruct that his photo and authorship be removed in a belated attempt to protect Gānswein? Surely there is more to come and plenty of time before "we", good loyal Catholics that we are, set the dogs on anyone?

Fair enough, Anna. You're right. There is plenty more to come and pondering a bit before making judgments is always good advice.