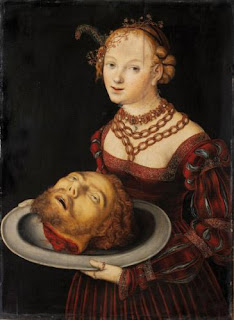 I'm not a big fan of liberal public radio, but it's beginning to look like all that smoke has fire behind it. Indeed, things aren't looking good for Archbishop Nienstedt and I'm afraid more revelations are likely to be coming out in the days ahead. So disheartening. Sometimes the bishops who appear to be orthodox use it as a screen behind which to hide.

I read an article in The Wanderer this morning about St. John the Baptist and the dance that cost him his head. So glad I saw it before reading about Archbishop Nienstedt's resignation which I found very disheartening.

But the article on John the Baptist puts things in perspective. Herodias, whose sexual sins earned the ire of the saint, had it in for John and she schemed and planned until she had the opportunity to finish him off once and for all.

Archbishop Nienstedt, whose given name also happens to be John, has been stalked by the gay "marriage" crowd ever since he sent out CDs to his diocese defending Church teaching on homosexuality and the attack on marriage between a man and a woman. The gays tried to get him with accusations of sex abuse which never stuck. So they went after him for "mismanaging" sex abuse in the diocese.

I don't know whether he mismanaged things or not, but all the signs are that the modern day Herodias lobby doesn't really care whether he's guilty as long as they get his head on a platter. His real crime is being orthodox instead of pandering to the gender Nazis.

Nienstedt is one more orthodox bishop who publicly defended Church teaching who has now been chopped to pieces. He joins Bishop Joseph Martino and Bishop Robert Finn in early retirement, as well as Cardinal Raymond Burke who was as good as retired when he was named patron of the Sovereign Military Order of Malta. Let us pray that all these men, relegated to the proverbial desert, imitate Jesus spending some time in prayer and fasting and then come out fighting for the faith with voices of truth!
Posted by Mary Ann Kreitzer at 2:36 PM

Labels: Archbishop John Nienstedt resignation, off with his head, The Wanderer

I came across this article by Phil Lawler courtesy of bigpulpit.com earlier today: http://www.catholicculture.org/commentary/the-city-gates.cfm?id=1083

It is heartbreaking - literally.

My heart is heavy. The gay lobby finally got him. I am equally disturbed by the resignation of Bishop Piché, a wonderful, sincere, humble, orthodox bishop.

I am sure Pope Francis was "licking his chops" when he accepted the Archbishop's resignation. In his mind he probably said, "wow, I'm rid of another out of touch orthodox bishop in the good old USA! I am no fan of Bishop Loverde, but I shutter to think of who we are going to get as a replacement when he retires in September. Cardinal Wuerl will probably do the selecting and that's a reason for serious concern.

I love that idea, Anonymous. Give us the good, "resigned" clerics.

Mary Ann, now that it is coming out that the Archbishop does not have clean hands, are you going to print a retraction and tell your readers to stop attacking Pope Francis?

Did you read the update? I think that constitutes a retraction.

It's still true, unfortunately, that those clergy who promote liberalism seem to get a pass for their wrongdoing. My own bishop covered up for an abuser in Ogdensburg, but it hasn't affected him at all.

I'm sorry. I didn't see the update. Thank you for posting that. However, don't you think you should say something about the way some of your readers comment about the Holy Father?

I don't feel obliged to respond to every comment.