You Better Be Paying Attention: How Gays Indoctrinate Your Kids!

Many times people tell me we don't have to worry too much about the culture of death because we're having children and they are not. While that may be true, it doesn't worry the pro-deathers at all. Their strategy? Steal YOUR kids. And here is how it's done. 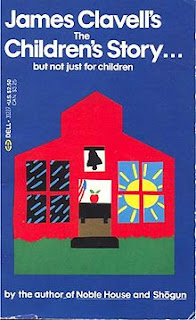 The article reminded me of James Clavell's book, The Children's Story, about a classroom of young children with a new teacher after a Communist takeover of their country. Here's how the story came about according to the author:

It was a simple incident in the life of James Clavell—a talk with his young daughter just home from school—that inspired this chilling tale of what could happen in twenty-five quietly devastating minutes. He writes, "The Children's Story came into being that day. It was then that I really realized how vulnerable my child's mind was —any mind, for that matter—under controlled circumstances. Normally I write and rewrite and re-rewrite, but this story came quickly—almost by itself. Barely three words were changed. It pleases me greatly because I kept asking the questions…

Questions like, What's the use of 'I pledge allegiance' without understanding? Like Why is it so easy to divert thoughts? Like What is freedom? and Why is it so hard to explain?
The Children's Story keeps asking me all sorts of questions I cannot answer. Perhaps you can—then your child will...."

What happens in The Children's Story is exactly what the lesbian teacher describes in the above article as she goes from classroom to classroom exercising mind control on her little guinea pigs. You see, nobody is really born gay and the gays themselves know it. Recruitment is part of their strategy through indoctrination and sexual experimentation and, as this teacher brags, it starts early.

So you see why no one in the pro-abortion or pro-homosexual crowd is worried about the fact they don't have children. As long as parents aren't paying attention to what is going on in the classroom, gay activists are home free. They don't need kids because they are stealing yours.

And even if parents are awake, the damage is often done to the chldren before parents find out. Read about the Maine school that used "diversity day" to teach middle schoolers about homosexual foreplay. Fighting after the fact is all well and good, but the children have already been emotionally and psychologically raped. Pray and fight, parents. And if you are able, home school.
Posted by Mary Ann Kreitzer at 6:00 AM