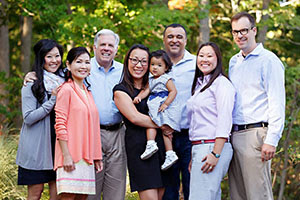 Please pray for Larry Hogan who recently announced he has advanced lymph cancer.

Among the people who influenced my serious commitment to the pro-life movement when I was a young wife and mother was Maryland Congressman Larry Hogan Sr., father of the current governor, and Dr. Bill Hogan, the older Larry's brother and the governor's uncle. Larry Hogan spearheaded some of the early Congressional efforts to protect unborn babies along with Congressman Henry Hyde. Dr. Bill Hogan developed some of the earliest media programs on abortion using slides provided by a pathologist who was appalled at finding the bodies of aborted babies in his lab refrigerator. That was back in the 1970s even before Roe v. Wade. I remember well attending a slide presentation by Dr. Hogan and being shocked and grieved at what was happening. And so I became a pro-life activist: giving hundreds of presentations, picketing and praying at abortion mills and ultimately being a rescuer, sidewalk counselor, and crisis pregnancy worker.

Unfortunately, Governor Hogan doesn't have the strong record of his dad and uncle. He "moderated" his stance when he ran for governor. But the Hogan family have a long history defending the unborn and deserve our thanks despite the current less than heroic positions of Governor Hogan..

So please pray for Larry Hogan and his family. God willing he will be cured and his close brush with death will give him a new commitment to protect the most vulnerable among us..
Posted by Mary Ann Kreitzer at 5:19 PM