Now How Could That Be? The Seas Used to be Higher? 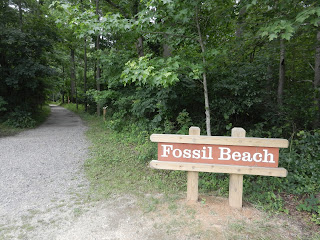 My husband and I just returned from a campout in Colonial Beach. Great place, lots to do! On one of our field trips we visited Westmoreland State Park where they have a "Fossil Beach" along the Potomac River. Prospectors find all kinds of things there: shark teeth, porpoise vertebrae, clam shells, etc. "What?" you ask. "Sharks teeth in a river?" Let me explain.

While we were walking back from the fossil beach we stopped to rest on a bench (long uphill climb). That's when we had the good fortune to meet a part ranger on her way back from the beach. We asked her if she found anything -- "Just a few shark teeth." But she had a box filled with fossils found on the beach by the park and shared them with us. One was a gargantuan shark tooth, about seven inches from tip to root.and about six inches across. Whoa! Wouldn't want to be bitten by that baby.

I found the fossil beach puzzling. "Sharks are salt water animals. What are they doing in the Potomac River?"

"Good question," she answered, "Ten thousand years ago the sea levels were much higher and this area was all salt water. Then gradually the rivers cut through and made it fresh."

Wait a minute! The seas were "much higher?" Was the polar ice cap melting? Were early buffalo exhaling so much carbon dioxide they caused warming that melted the ice cap and made the seas rise? Maybe the million humans supposedly on the planet at the time were all hyper-ventilating.