I'm still slogging through Laudato Si' but can someone explain why this man would be involved? 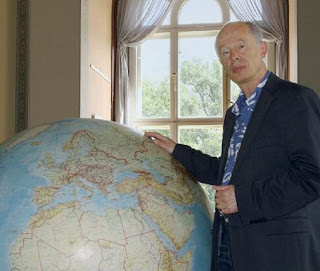 BREAKING: Schellnhuber Appointed to Pontifical Academy of Science
Why exactly would the pope select an atheist and a population control guru to sit on a pontifical council? If somebody can't even get the first principle (God exists!) right, how can he be trusted to get anything else right? And if he thinks there are too many people on the planet and thinks we need to get rid of about six billion of them, why is he not dismissed as an enemy of the poor. Let's face it; these people ALWAYS talk about overpopulation in the THIRD WORLD. Elimination of the poor through exporting abortion and contraception is a major priority. And the U.N., whose agenda this guy champions, is an expert at promoting the culture of death. Doctors in the Third World describe shelves filled with contraceptive pill packets and abortion machines while they have no antibiotics or anti-diarrhea medicine. Ah...but they care about the planet!


It's true that Jesus chose a betrayer as an apostle. But Judas didn't have a history of betrayal from the beginning. He only took the thirty pieces of silver in the last few days before the crucifixion. Schellnhuber, on the other hand holds positions so antithetical to Church teaching they should disqualify his participation in writing any Church document. So...what exactly makes an atheist who thinks the planet can only sustain one billion people and wants one-world government (not under Christ the King obviously) a fit spokesman for the Vatican?

Schellnhuber isn't the first controversial member named to the Academy and Pope Francis isn't the first to make a head-scratching appointment. (See here.) Nevertheless, this latest baffling act is not likely to bolster the confidence of orthodox Catholics in the wisdom of Pope Francis. As my mom often said, "You can know a man by the company he keeps." An atheist spokesman for the Church is a contradiction of the first order.
Posted by Mary Ann Kreitzer at 10:33 AM

Good Lord Mary, you would think that with those two wonderful names your good Catholic parents gave you there would be some scintilla of Catholic faith somewhere in that muddled head of yours. To all you busy spiritual women bloggers I say, "it's the pope sillies". Stop writing and emoting and instead start praying. Maybe at some stage Our Lady will lead you to Divine Catholic faith which you obviously do not have. If you did, then you would know your "pope" is a rabid heretic and successor of heretics. Start defending Our Lord's papacy when you start believing.

You're reading it? Who are you to judge 200 pages of this messy encyclical? Why not just replace your obsession with old issues like gays, abortion, and birth control with a new balance and focus on the carrying capacity of the planet, the poor, capitalism and the care and feeding of rabbits. Forget about the rabbit thing. I just threw that in at the end of the day. We all know that Catholics 'do not need to breed like rabbits'.

There you go again, Lourdesman, with your insults rather than addressing the issues. I posted this comment, but its the last ad hominem pass you get. If you want to critique the encyclical examining the data, etc., I have no problem, but just throwing out insults is the tactic of a man without an argument. There have been plenty of bad popes in Church history. Pope Francis was elected by the conclave of Cardinals. I accept his office even if I disagree with some of what he's doing.

Fmshyangua, I agree. Judas was no doubt a secret betrayer from the beginning and totally known to the Savior. My point was that he appeared to be among the faithful. Schellnhuber doesn't even bear the appearance.

Following Lourdesman's profile back to his own blog, we see that he is a sedevacantist heretic. It is you, sir, who are placing your immortal soul in grave danger. Please repent and come back to the Church, lest you continue to imperil your eternal salvation.

Unless I am seeing things that are not there, the last time I looked the chair of Blessed Peter was definitely occupied but occupied by what? What a silly word is Sedevacantist! "Rome will lose the faith and become the seat of the Antichrist" according to the Roman Catholic Church and Our Lady of La Salette. Only those of us who believe in the Eternal Papacy can tell the difference between popes from heaven and popes from hell. Any so called Catholic who honours the rantings of a heretic with the status of "Encyclical" is insulting the Eternal Papacy of Jesus Christ and his holy popes. Again, it is absolutely necessary for salvation for every human creature to be subject to the Roman Pontiff.That dogma applies to me and anyone else commenting on this "truth" blog.

Mr.Lourdesman got it right. No need for clarification. Pope is out of control. But we know one thing, God still is. Better to spend your time in prayer than read this palpable papal nonsense. Laudato No!!

Lourdesman, I must correct your interpretation of the messages of Our Lady of La Salette in 1846 While the original messages were approved. Melanie wrote a greatly expanded and much more apocalyptic message on her own authority in 1879. It ended up on the index of forbidden books. Judging from much of the biographical material on the two children, some of the writings going around are definitely false as is what you are quoting. Maximin, when pestered about the secret, would often write fictional accounts. He specifically repudiated certain of his writings as belonging to this group.

Here is a website with the messages authenticated by the Church. They are sobering and serious, but not nearly as sensational as the fictional writings that you quote. Anyone discussing the La Salette messages must be sure they are not from the fictionalized accounts.