I'm pretty eclectic in my reading and, as I took a look at this morning's headlines and read back issues The Wanderer these articles caught my eye.


A few days ago, the bishop of Northampton, Peter Doyle, released a letter explaining his decision not to open a cause for sainthood for Chesterton. Among the reasons he gave was that Chesterton was anti-semitic. It's a ridiculous charge, but these days if one says a single word of criticism against Israel or Zionism or anything related to Judaism, one is often smeared with the accusation. The same thing happens with other nonsense in the culture. If you oppose killing babies you're a misogynist who hates women. If you oppose same-sex marriage you're a hate-filled homophobe. Like Jesus said, if you follow Him the world will hate you!

I was disappointed personally in Bishop Doyle's decision, but it certainly doesn't affect the final reward of Chesterton whose writings continue to bring many to the faith. What an evangelist! A note of encouragement comes from this article at Crisis Magazine: G.K. Chesterton May Be a Saint Yet. Ah...just give it time. Some canonized saints waited hundreds of years for their sanctity to be recognized. And I'm not a fan of the current fad of instant canonization so I'm happy to be patient and continue praying. 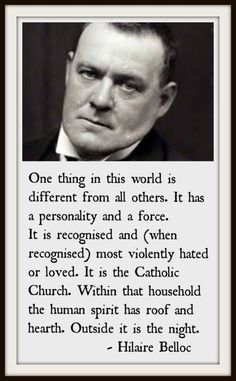 When a book review begins with a quote from Hilaire Belloc, Chesterton's friend, I sit up and take notice:

"The Catholic Church is an institution I am bound to hold divine -- but for unbelievers a proof of its divinity might be found in the fact that no merely human institution conducted with such knavish imbecility would have lasted a fortnight."

Amen to that! We are certainly seeing much "knavish imbecility" today with emphasis on the knavish. How can anyone seeing the evil of Theodore McCarrick, Michael Bransfield, Donald Wuerl, and even Pope Francis not be scandalized by their behavior? But this book promises to fortify Catholics by helping them realize that it has always been thus.

Not much consolation, you say? Perhaps, but it does remind us that the devil has always roamed the earth with his greatest success being the perversion of clerics --whether the pastor of the local church or the Holy Father, pastor of the universal Church, in Rome. I just ordered this book which reminds the reader that "Again and again, in...times of crises, boatloads of bishops and priests betrayed Christ and their Catholic faith. Those who did so acted from venality, pride, greed, sexual desires, political expediency, and occasionally ignorance and stupidity."

Ah...some things never change. So take heart and persevere and study the history of the Church. Bad popes are only part of the story. The glories of our faith far surpass the "knavish imbecility."


Dads have a big challenge defending their families today. In a conference last weekend, Steve Brady of Roman Catholic Faithful, urged fathers to fight the corrupt members of the hierarchy. Brady said, "The Catholic hierarchy has destroyed the culture today," and I have to agree that their scandalous behavior has done great damage to the Church and to the family. I also agree that the damage they've inflicted can be partially mitigated by vigorous witness of the faithful fighting against it and striving to live holy lives.

A priest once told me that if you can't stop a scandal, the next best thing is to expose it. When you lift up the rock, the creepy crawlies run for cover. So dads, moms, faithful Catholics of all ages and sex -- pick up the gauntlet. Speak the truth in season and out even when it involves correcting the evil of clergy and religious. Remember, every heresy came from within the Church, generally introduced by a priest or bishop. Warn your children that not everyone in a roman collar or a religious habit is telling them the truth. Teach them to love Jesus, practice prayerful discernment, and embrace orthodoxy.  That's the best vaccine against the prowling lions of our day!

May your week be truly blessed!