Fr. Martin Misrepresents His Book as Having "Canonical Approval"...


Defending his book, Building a Bridge (2017), Jesuit Father James Martin claims that its consistency with Church teaching is attested to by (A) his own good standing as a priest, and (B) the canonical approval the book received from his Jesuit superior.

Martin’s first claim, that he is a priest in good standing, is neither contested nor relevant to the question of whether his book is doctrinally sound or pastorally trustworthy.

Martin’s second claim, that his book enjoys canonical approval, requires some context before one can appreciate what that means—and doesn’t mean. Read more here.

Martin’s book apparently does not have a standard nihil obstat orimprimatur; it might or might not have a Jesuit theologian’s in-house certification of its avoidance of doctrinal error; it does have a Jesuit superior’s indication that, in his view, the book can be prudently published.

Thus, in short, to tout a religious superior’s imprimi potest as proof of one’s personal or authorial orthodoxy is to misconstrue what that certification is and what it means.

Fr. Martin is an expert at throwing sand in people's eyes. And, in view of the Jesuits' disgraceful dissent from Church teachings these days (Just check out their scandalous colleges!), why would anyone trust his superiors to guard the faith?

If you hear of a parish promoting Fr. Martin's book, be sure to make your voice known. Follow Austin Ruse's advice and ask him hard questions -- like "Do you believe marriage is between one man and one woman?" or "If, as you say, same sex relationships are simply 'differently ordered' rather than disordered as the Church says, does that mean same-sex relationships are normal and equivalent to relationships between a man and a women?"

Or if you don't want to engage, write up a flyer with some salient facts about Fr. Martin's dissent and pass them out to those attending the meeting with some like-minded friends while you all pray the rosary. You will be reviled by some, but you will definitely stir consciences.

For those in the Hampton/Hampton Roads area of Virginia, Fr. Michael Renninger will be leading a discussion next Friday at Immaculate Conception Church.  I had a personal experience at that parish several years ago when my husband was Grand Knight of our parish Knights of Columbus. We attended the state meeting in Hampton Roads and attended Mass at Immaculate Conception on Sunday morning. Ai yi yi! What an experience! You can read about it here. And today they have a big banner headline on their website that "All Are Welcome."

Whenever I see a parish featuring that message, I check them out thoroughly because they are almost always promoting the gay agenda. The Welcoming Project uses the "all are welcome" slogan on the rainbow flag and was developed, as they say on their website, to specifically make the LGBTQ community "feel welcomed" (i.e. affirmed in their sin):


The Welcoming Project began in 2011 to encourage local businesses, health care/service providers, organizations, and congregations in Norman, OK, to display welcoming signs for the purpose of making LGBTQ (lesbian, gay, bisexual, transgender, and queer) individuals and allies feel welcomed as patrons. The Welcoming Project is available to communities throughout the United States. You can find a list of all of our Welcoming Places in our searchable online directory. 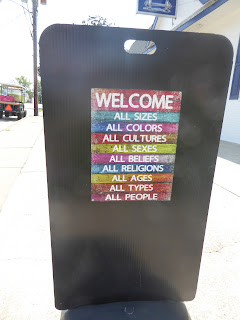 But, let's face it, the real purpose of this project is to normalize the gay agenda. Everywhere we go we have to have their perverse behavior shoved in our faces. It was a strategy promoted by Kirk and Madsen in After the Ball who called for desensitizing the culture by constantly talking about homosexuality. Are we there? I walked down the street in Colonial Beach a few weeks ago only to pass a gym with a modified "all are welcome" sign out front.

I haven't seen any "All Are Welcome" signs at Catholic churches with the rainbow flags attached, but the slogan definitely has a gay connotion attached to it just like the term "pro-choice" is attached to approval of abortion.

Please, Church Militant, for the sake of your children and grandchildren don't stand on the sidelines. March under the banner of Christ and confront and oppose the homosexual agenda -- whether it's being promoted by a man in a roman collar like Fr. James Martin or by businesses in the culture like Starbucks and Target. Always speak with a big smile and a soft voice, but carry the sword of the Spirit, the word of God, and use it boldly. If we can speak the truth gently and without rancor we may touch hearts. But our silence implies that we consent to evil and that's the coward's way out.

The Office of Readings for 17th September:

The second reading is from the beginning of a sermon on Pastors by Saint Augustine in which he reminds us that there are shepherds who want to have the title of shepherd without wanting to fulfil a pastor's duties.
St Augustine also reminds us that God condemns those shepherds: they took care of themselves rather than their sheep.
Who are they that nourish themselves? They are the shepherds that the Apostle described when he said "They all seek what is theirs and not what is Christ's".
Saint Augustine then goes on to examine his own role as bishop, a role based on the Lord's greatness rather than his own merit. He adds to the fact that he is a Christian and must give God an account of his life, however, he must also as a leader give God an account of his stewardship as well.
A timely message for all of us, the laity, Father Martin and our Pope, Cardinals and Bishops

Thanks for that, Aussietomt. I sent a Mass stipend to an abbey I support to pray for Fr. Martin's conversion. The spiritual director on the Ignatian Retreat I attend every year talks about priests having "commando devils" attacking them. We need to pray more for the clergy and fast and sacrifice as well.