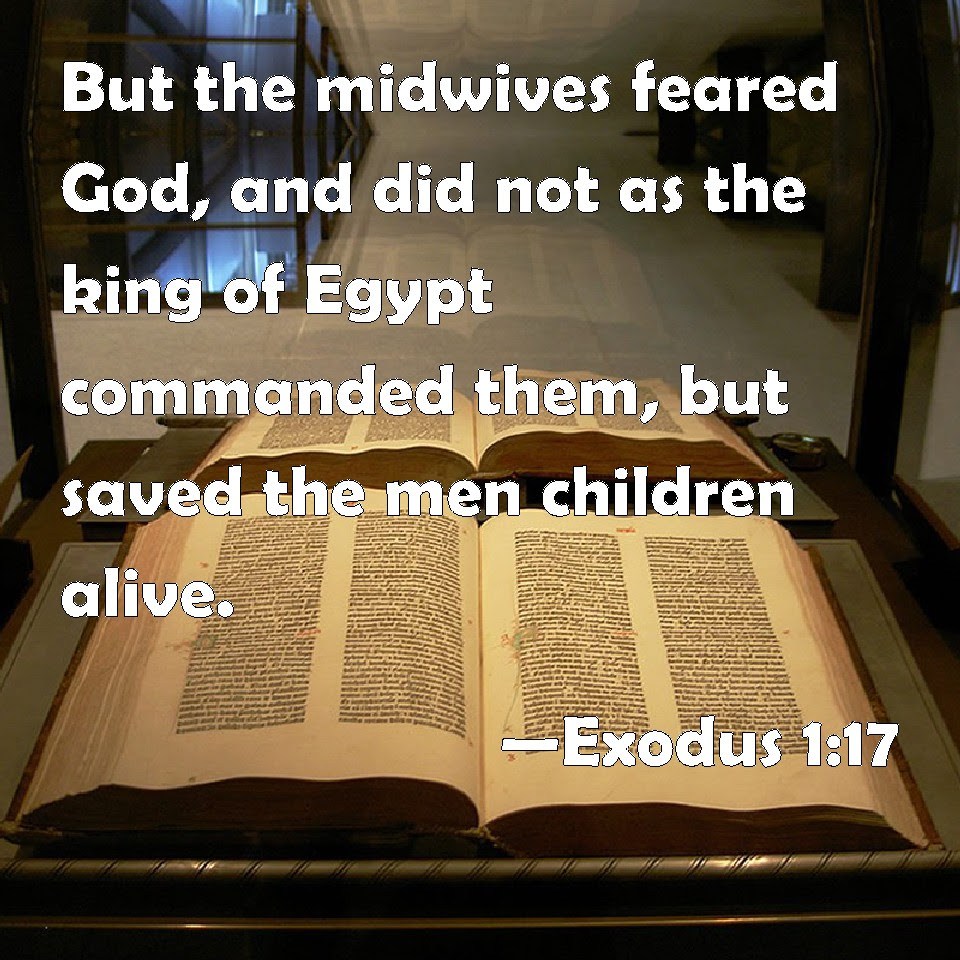 Remember the midwives of Egypt during the slave days of the chosen people? They refused to kill the male babies telling the authorities that the Israelite women delivered without their help before they could arrive. Hence, they avoided becoming cooperators in infant killing.

But that was then and this is now.

The American Nurses Association (ANA) recently amended their statement on Nutrition and Hydration at the End of Life. The amended document approves of assisting patients to kill themselves by starvation and dehydration, even those who are suffering from dementia. Read Nancy Valko's commentary on their decision here.

The language is specifically geared to make their decision sound like it respects the dignity of the patient, as if any preference of a patient is legitimate. But what this does is to endanger nurses who don't want to cooperate in evil, as well as the patients for whom they care.

Let's talk about cooperation with evil for a minute since it's a soul killer. Killing someone either by commission or or approving it by doing nothing to hinder the murder (omission) is evil. It violates the 5th Commandment. Whether the person who commits the act is the person himself (by suicide) or someone helping (assisted suicide) or someone deliberately killing an innocent person without their consent (murder), it's evil.

We do not belong to ourselves, but to the one who created us. The person who assists or the one who stands by and passively watches is a cooperator in evil -- like the person at a bank robbery driving the get-away car. He assents to the evil and is a cooperator. Hence, he shares the guilt of the one who shoots and kills the bank teller and others during the crime. Trying to hide behind language about the dignity of the person and respecting the "autonomy" and "self-determination" of the individual is nothing but a smoke screen to put the mask of compassion on evil. And just like abortion, which started out as a "solution" for extreme situations, this will soon become death on demand for those who choose it and death by caregivers' choice for those who don't.

It also puts nurses in the situation of being forced to participate. Just as Pharaoh ordered the midwives to commit evil, the medical establishment will be ordering nurses just to "do their jobs" and starve and dehydrate patients to death. Or else!

It's not like we don't know where this is going. In the Netherlands, involuntary euthanasia is out of control and has been almost since its legalization. Studies indicate that one in five euthanasia victims are killed without their consent. Doctors who began euthanizing patients at their request now kill them without it. Why should we expect things not go the same way here?

Once man begins playing God, the result is worse than a devastating tornado or hurricane. When you sow the wind you reap the whirlwind. And the winds of chaos are swirling all around us. No surprise really. When doctors began murdering babies at the request of their mothers in 1973, the involuntary murder of the "useless" among us became inevitable.

The saddest thing to me as a woman, a mother, and a grandmother is that we are called by God to be the nurturers, the civilizers, the caregivers. We rock the babies, soothe fevered brows, spoon-feed the sick who are too weak to feed themselves, comfort the distressed, and embrace the sorrowing. When women abandon their natural, spirit-filled motherhood to abet killing the weak and suffering, we have truly entered the realm of the diabolical.The ANA's decision brings us one step closer to hell on earth.

Most Sacred Heart of Jesus, have mercy on us.
Immaculate and Sorrowful Heart of Mary, pray for us.
Posted by Mary Ann Kreitzer at 10:09 AM

Labels: American Nurses Association, assisted suicide, cooperation with evil, euthanasia, murder of the innocent, statement on Nutrition and Hydration at the End of Life