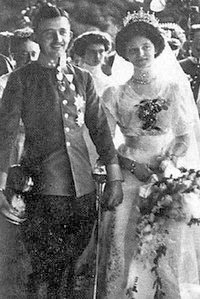 I can't imagine two more appropriate souls to intercede for our poor state as she sees a monumental battle between the forces of life and death. Terry McAuliffe is not only committed to the murder of unborn children and the destruction of traditional marriage, he is among the most corrupt politicians of our time. He has devoted his entire career to selling influence for campaign donations.. He earned his millions from corrupt deals (Read about just one here.) To think of him taking over the governor's house in a state that gave our nation many of our Founding Fathers is nauseating. But with Planned Parenthood and the Bloomberg Foundation and other outside sources pouring millions into his campaign (Three out of every four dollars is from outside.), he has a definite money advantage. But we can counterbalance that advantage with what McAuliffe will never have: our own prayers and the intercession of holy men and women. And so I offer two today to pray for Ken and Teiro Cuccinelli especially, but also for the entire pro-life Virginia ticket, namely


Karl came to the throne of Austria after the assassination of the Archduke Ferdinand and his wife Sophie by a Balkan nationalist. It was an the eve of World War I and the young king had little experience in government or military strategy. Nevertheless he was swift to introduce reforms and target the corruption of elitist government leaders. During the war, he turned his carriages into a fleet for the poor delivering coal and other necessities to his people. He put his own family and the palace on the same type of rations eaten by the common people. He turned up on the front lines to visit his soldiers regularly and they nicknamed him Karl the Sudden for his surprising and unexpected visits that gave them such encouragement.

He and the empress were committed to the Catholic faith and to the nation. The most important thing to which they aspired above all else, was heaven.  You can read their biographies and follow the cause for their canonizations here and here.

I beg you to pray a novena for the canonization of Blessed Karl  and his wife Zita asking them for the favor of interceding for the election of Ken Cuccinelli, E.W. Jackson, and Mark Obenshain for Virginia if it corresponds to God's will. I am going to begin a novena tomorrow saying the prayers below daily and offering my daily Mass and rosary for a pro-life victory in Virginia. Money can never compete with the power of the Holy Spirit. I beg you also to commit to some grass roots efforts to get out the vote for our pro-life ticket.

Prayer for the Canonization of Blessed Emperor Karl of Austria:


[To be prayed at the beginning of each day of the novena.]

Heavenly Father, through Blessed Emperor Karl You have given Your Church and the people of God an example of how we can live a discerning and spiritual life in a convincing and courageous way.

His public actions as emperor and king, and his personal acts as a family man, were firmly based in the teachings of the Catholic Faith. His love for his Eucharistic Lord grew in times of trial, and helped him to unite himself to Christ’s sacrifice through his own life’s sacrifice for his peoples. Emperor Karl honored the Mother of God, and loved to pray the rosary throughout his life.

Strengthen us by his intercession when discouragement, faintheartedness, loneliness, bitterness and depression trouble us. Let us follow the example of Your faithful servant, and unselfishly serve our brothers and sisters according to Your will.

Hear my petitions and grant my request [mention your intention here].
Grant that Blessed Karl of Austria be deemed worthy of canonization, for the glory of Your Name, the praise of the Blessed Virgin Mary, and for blessings upon the Church.
Amen.


God, our Father, You redeemed the world through the atoning sacrifice of Your Son, our Lord Jesus Christ. He who was King became the Servant of all and gave His life as a ransom for the many. Therefore You have exalted him.

Now deign to grant Your servant Zita, Empress and Queen, to be raised to the honor of the altars of Your Church. In her You have given us an admirable example of faith and hope in the face of adversity, and an unshakeable confidence in Your Divine Providence.

We beseech You that Zita, alongside her husband Blessed Karl, will become a model of love and marital fidelity, and be an example for families in the ways of a true Christian upbringing. May she who in every situation gave her heart to others, especially the poorest among us, be an example of service and love of neighbor to all.
Through her intercession, grant our petition (mention your intention here). Through Christ our Lord. Amen.

One Our Father, three Hail Marys, and one Glory Be

You and your readers may be interested in the Third Annual Traditional Latin Mass, Luncheon & Conference in honor of Bl. Karl at St. Titus Church in Aliquippa, PA, on Sunday, 6 April 2014.

Details and reservation info can be found here:
http://knightsofcolumbuslatinmass.blogspot.com/2014/02/third-annual-blessed-karl-mass-luncheon.html