Did Obama Plan the Shutdown Months Ago? 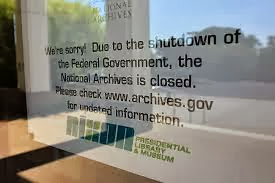 My brother received this from a friend and posted it on his Facebook page. I'm re-posting here because I wonder how many people have considered these points. All of the coordinated activity for this shutdown could not have been an accident. It was, as the email says, planned well in advance of its implementation. Let's pray somebody finds the paper trail. We need another whistleblower like Edward Snowden to expose how the tyrant-in-chief and his minions planned this months ago. God help us if we don't stand up to him!


I have worked in the government on and off for 40 years. During that time I became quite familiar with requisitions, bidding, awarding contracts etc. It is a time consuming process with bean-counters and pencil-necked bureaucrats every step of the way. The simplest request takes months not days or hours.

In less than 8 hours of the shutdown, miraculously, professionally printed 3X4 foot signs appeared all over the country in the tens of thousands saying-"this [park, facility, etc. with custom logos] closed due to government shutdown. There has not been a government shutdown in 17 years. These signs were designed, specifications were determined, signs were then requisitioned, bids were posted and vetted, government contracts were awarded. The materials were then ordered and the signs manufactured then distributed U.S. Mails or freight companies.

This shutdown was orchestrated and planned well in advance at least 6-8 month ago. Millions of tax dollars were appropriated and spent in this process. There is a paper trail a mile long leading directly to the White House.

People do not realize just what we are dealing with!

There's a reason Obama is endorsed by the Communist Party USA. We are dealing with a man who hates this country and is orchestrating its downfall. And he's doing a darned good job with the help of a complicit media, useful dupes, and fellow travelers. Wake up, America!
Posted by Mary Ann Kreitzer at 10:14 PM

So, who's blocking it?