Buchanan Nails it Again: Harry and Barry are Sadists! 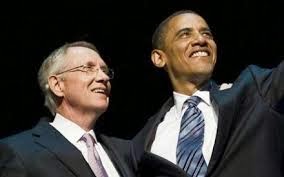 They want to inflict as much pain on the American people as possible and blame it on the Republicans to gain political points.

Here's just a bit of what Buchanan writes:


In the showdown over the shutdown of the U.S. government, the Obamaites tipped their hand yesterday as what their strategy is.

Undeniably, Republicans have voted to defund Obamacare, to suspend it for one year, and to reform it. But in each of these three votes, the House also voted to fund the entire government.

Why, then, is the government shut down? Because Harry Reid and Barack Obama have issued an edict: Either Obamacare is fully funded and untouched in the continuing resolution, or we kill the CR, shut down the government, and blame you.
And this is exactly what is going on....

The Obama-Reid strategy is, in a word, sadistic.

They are inflicting pain on fellow Americans — to break their political enemies. And they can only succeed in sustaining their Big Lie — that it is Republicans who want to keep the government shut down — because of a collaborationist press....

Several days ago, the Post wailed that Republicans were endangering the nation’s health by failing to fund NIH. But now that the Republican House has tried to fund NIH in full, where is the editorial denouncing Pelosi or Reid for blocking funding for NIH? Nowhere. Which suggests the Post’s real concern was never about funding NIH but about bashing the GOP. [Read more...]

Yup, that's liberalism at work. And who are the name callers? It's the Dems saying Republicans are unhinged, legislative arsonists, terrorists with bombs strapped to their chests, hostage takers, murderers, saboteurs, anarchists, squealing political pigs, etc. ad nauseum. Check out the name callers here and here. If you have a democrat for a senator call and ask why he isn't voting to fund the NIH and other agencies the House has voted to fund. I'm calling my own two Virginia senators tomorrow. Mark Warner and Tim Kaine, why are you voting to keep agencies closed?