The Liars Knew That Millions Would Lose Their Health Plans! 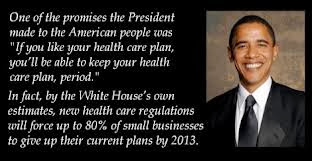 Now here's the reality (from the article above):

Robert Laszewski of Health Policy and Strategy Associates, told NBC....He estimated 80 percent of those in the individual market will not be able to keep their current policies and will have to buy insurance that meets requirements of the new law, which generally requires a richer package of benefits than most policies today.

George Schwab, 62, of North Carolina, told NBC he was "perfectly happy" with his plan from Blue Cross Blue Shield, which also insured his wife for a $228 monthly premium. But this past September, he got a letter saying his policy was no longer available.

The "comparable" plan the insurance company offered him carried a $1,208 monthly premium and a $5,500 deductible. And the best option he’s found on the exchange so far offered a 415 percent jump in premium, to $948 a month.

The government knew they were lying to the American people! They didn't tell people they could only keep their health care provider if they doubled, tripled, or quadrupled their premiums. Remember when they said, you might have to choose between health care and food? Well that time is now and those who have to drop their health care because they can no longer afford it will have to pay a fine as well. What a deal!

But, hey!, somebody has to pay for all the free health care for welfare recipients and illegal aliens. Oh...you didn't know illegals get Medicaid? According to the Washington Post, under an "emergency Medicaid" program $1.3 billion went to hospitals in 2011 to cover illegals and legals who haven't been in the country long enough (five years) to qualify for Medicaid. Obamacare isn't going to change that, except possibly make it worse. Oh...and thirty million Americans will still be uninsured. Did you believe Obama when he promised the sun, moon, and stars -- and all for free? Well, like Ecclesiastes 1:15 says, "The perverse are hard to be corrected, and the number of fools is infinite."

Really, what do you think...will the truth change the opinion of the average perverse, fool liberal? Now, now...stop laughing!