Obamacare for Thee, but Not for Me 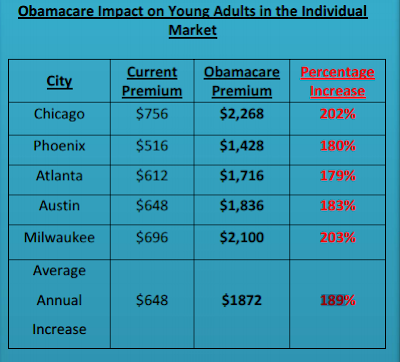 Obama keeps talking about fairness in health care coverage, but his bill is anything but fair, especially to young people. Ironically, the very group that tends to jump on Obama's bandwagon will get hit hard when buying health insurance - paying two or three times as much under Obamacare as their current premiums. When I think of some of the young people I know who are dyed in the wool liberals, I have to shake my head. They are in store for a rude awakening about their hero.

Study: Premiums for Young People to Rise in all 50 States

Meanwhile, Obama's big supporters will get waivers and exemptions. The Republicans introduced a bill to eliminate the current federal subsidies to Congress and their staffs, but the Democrats tabled it. So much for their promise to treat Americans fairly. They always carve out special privileges for themselves -- which is exactly what caused the French Revolution against the elitist nobility. Yes, Virginia, we do need a tea party rebellion against the likes of Harry Reid and Nancy Pelosi. All they care about is money and power for themselves. And all those RINOs too. There are darn few elected officials who resemble the founders who sacrificed to serve. The "public servants" today are the ones working in the Congressional cafeterias and dining rooms.
Posted by Mary Ann Kreitzer at 3:09 PM