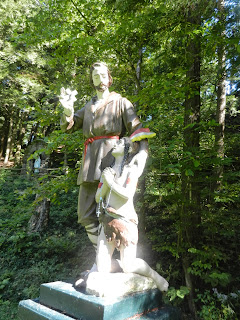 From an article at EWTN:


The labors of the Jesuit and Franciscan missionaries in the New World form an important chapter in the history of the Church and of the Western Hemisphere. These missionaries were for the most part men of culture and learning, carefully chosen and rigorously trained. Many of them gave up important careers in the Church to endure the dangers and privations of the wilderness. In New France, as Canada was then called, where Isaac Jogues spent his missionary years, their lot was hardship, disease, solitude, and, not infrequently, torture or violent death. The perils of forest and trail, the intense cold, the wretched food and verminous huts of the Indians, changed them, after a few years, into haggard old men; yet their spirits remained undaunted, strengthened as they were by an indomitable faith. What the American historian, Francis Parkman, in

Here's what Fr. Jogues wrote in a letter to a friend:


My heart tells me that if I have the happiness of being employed in this mission,

Now don't you wish you had a bishop and pastor cut from this cloth?
Posted by Mary Ann Kreitzer at 3:20 PM