Listen Up, Virginia: To Mask or not to Mask! It's Up to You.

The photo on the right is making the rounds on Facebook. Governor Janet Mills is the tyrant in Maine whose draconian policies make absolutely no sense, especially in parts of the state that have very few COVID-19 cases (not to mention very few people!). The store owner posted this sign essentially making the premises a shame-free safe zone. If you want to wear a mask, wear a mask. If you have a condition (respiratory, anxiety, etc.) that makes wearing a mask inadvisable, don't wear one.

Virginia Governor Northam just mandated (starting Friday) a draconian order requiring masks in essentially every business in the commonwealth, including restaurants where you may only remove the mask while eating. Think about that. Take off your mask, take a sip of water, put on your mask, take off your mask, take a bite of food, put on your mask. If you pause for conversation you better have that mask on! Oh...and don't forget...every time you touch the mask you need to sanitize your hands...so don't forget to have the bottle right there and use it throughout dinner.

I won't wear a mask, primarily for a health issue. But also because I think they're unnecessary in my circumstances. When I go to daily Mass I'm sitting a lot more than six feet from everyone else. Going up to Communion we all socially distance, so I'm no threat to anyone and don't consider anyone else a threat to me. I stay away from crowds. I boost my immune system with sun exposure and vitamins C and D. If I'm sick, which I haven't been for ages despite being immune-compromised, I stay home.

I read the governor's executive order which I will be carrying around in my purse. Under the section on "exceptions," it reads:


Persons with health conditions that prohibit wearing a face covering. Nothing in this Order shall require the use of a face covering by any person for whom doing so would be contrary to his or her health or safety because of a medical condition.

A woman I know from Front Royal was denied entry to the Goodwill because she wasn't wearing a mask, despite her saying she has health condition that makes it medically inadvisable (not to mention that the governor's mandate isn't in force until Friday). They were intransigent in their treatment of her. Well, folks, we don't have to take it!

Many liberals love Saul Alinsky and one of his "rules for radicals" is to make the enemy live up to their own rules. One of those "rules" is the governor's own edict which allows exceptions. Another is the Americans with Disabilities Act.  Under the act it is illegal to discriminate against anyone with a disability because "physical or mental disabilities in no way diminish a person's right to fully participate in all aspects of society." The definition of a disability is a "physical or mental impairment that substantially limits one or more major life activities of such individual." The definition of a major life activity:

Pretty broad definitions. Many of us could qualify under the law. So the next step is informing a business that refuses entry to someone for not wearing a mask (or for wearing a mask) that you will report them to the Department of Justice for violating the Americans with Disabilities Act. It is illegal to discriminate against anyone with a medical disability. 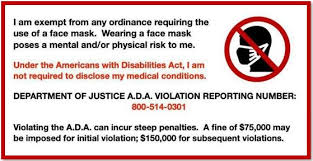 So I will be carrying the governor's edict in my purse. I'm also going to run off a notice to give to any establishment that denies me entry for not wearing a mask:


If you deny me entry to this establishment, which is illegal under the Americans with Disabilities Act (ADA), I will file a complaint with US Department of Justice, 950 Pennsylvania Avenue, NW, Civil Rights Division, Disability Rights Section, Washington, D.C. 20530.  "[D]isabilities in no way diminish a person's right to fully participate in all aspects of society." Violations of the ADA carry stiff financial penalties.

And I will definitely follow through by filing a complaint and encouraging others to do the same.

If you know anyone concerned about wearing a mask for physical, mental, or emotional reasons pass this information on to them. They have the same right not to wear a mask that others do to wear one.

But please, let's stop the public shaming. If you don't wear a mask, respect the common sense and concern that motivate those who do. If you do wear a mask, stop the virtue signaling and shaming of those who don't. Let's respect each others' right to come to different conclusions about how to deal with COVID-19. There is just too much conflicting information for anyone to play king of the mountain claiming to have all the answers, especially the "experts" who change their tune every five minutes. And here's something you can use for stores that discriminate against the maskless.

Under the Americans with Disabilities Act (ADA), it is illegal to deny service or access to services available to anyone with a physical or mental disability. According to the ADA "disabilities in no way diminish a person's right to fully participate in all aspects of society." It is illegal to discriminate against anyone with a medical  or mental disability and, under the ADA and hipaa privacy regulations you have no right to private health information and may not require it. If you deny entry to this establishment or deny service, the person so denied can file a complaint with the US Department of Justice, 950 Pennsylvania Avenue, NW, Civil Rights Division, Disability Rights Section, Washington, D.C. 20530. Violations of the ADA carry stiff financial penalties.
Posted by Mary Ann Kreitzer at 12:28 PM

And for an interesting commentary on the War of the Masks see https://spectator.org/the-war-of-masks-mask-wearing-shopping/

Under no circumstances will I wear a mask. If that means not going somewhere, well, so be it.

I'm receiving an order from Costco today of the few things that I can't get at Wallyworld or my local grocery store. Bottom line? I'm saving tons of money since I'm not grabbing all the "extras" when I'm actually in the warehouse.

Thankfully in North Idaho you don't see the face mask virtue signaling shaming going on. As for walking down the Wallyworld aisles the wrong way? Universally ignored (if they even see the little sign of the floor.)

I was in a store today (no mask) walking down the aisle when a woman coming towards me in the opposite direction said as we passed (with a disgusted look on her face): "There's an ARROW there on the floor!" Then she stopped and POINTED at it so I would be an aware caring person in the future and obey by not going the wrong way down a one-way aisle. I just kept on walking. Everyone else was also not even looking at the arrows or minding them.

LOL! You should have effusively thanked her for being the hall monitor. These days it's easy to understand how so many complied with Commie and Fascist governments. We see evidence of it every day -- even at church. Sheesh! In my old home town of Elkridge, Md they've banned any religious service that involves eating or drinking so the Mass is banned. The Howard Country local government has decreed. Now let's see what Archbishop Lori does.

Here's a link to video from E Michael Jones interview a young man in Croatia. The young man talks about how the Croatian people stood up against tyranny with the leadership of one lone priest. The money quote "Where the Church is weak, the lockdowns are strong." https://youtu.be/ip9y91NaWa4

For a little light-hearted fun see Mundabor's blog on the "settled science or mask resistance." https://mundabor.wordpress.com/2020/05/28/settled-science-or-the-mask-resistance/