Can you imagine Hillary - the Islamic OIC Globalist - saying this? We had better be thanking God that President Trump was victorious. We were given a 4 year (now three) reprieve from the powers of darkness. Pray for 2020, because if  Democrats win, there will be hell to pay for all "Deplorables". BTW - where is Huma Abedin now?

Posted by Susan Matthiesen at 11:50 AM 4 comments:

Why does the pope keep talking to Scalfari?

Remember the old adage, "Fool me once, shame on you; fool me twice, shame on me!" Can anyone explain why the pope keeps talking to atheist "journalist" Eugenio Scalfari? Every time he does (even when he didn't "grant an interview") the Vatican has to do damage control. The latest is the comment about whether hell exists or sinners just (poof!) cease to exist. Unfortunately, the Vatican response doesn't present the doctrine clearly, it just reiterates (once again) that Scalfari takes no notes or recordings and just remembers in his own words what the pope said.

Seems to me that Il Papa and Scalfari should confine their discussions to the weather.
Posted by Mary Ann Kreitzer at 10:15 AM 3 comments:

I always thought NPR was a joke! But they outdid themselves mis-defining Easter!

When I read that NPR (National Public Radio) said Easter was "the day celebrating the idea that Jesus did not die and go to hell or purgatory or anywhere at all but rather arose into heaven." I thought it had to be an April Fools joke -- albeit a little early. I always check out things that sound preposterous, and so I went to the source itself and there it was -- the revised article with a correction at the bottom. This is why I do not listen to NPR. Their ignorance and bias are so pervasive they can't even get a simple fact right, one that every Christian child knows. (This is one more reason NPR should be defunded! Why should taxpayers be forced to advance their liberal stupidity?)

But, hey, they're good for a laugh on this Holy Saturday and this should remind us to pray for liberal so-called "journalists" many of whom live in echo chambers devoid of Christians. Hence their ignorance of basic Christian beliefs. So let's all pray for liberal reporters at the Easter liturgy. It's a time of hope, after all.


CorrectionMarch 30, 2018
An earlier version of this post incorrectly described Easter as "the day celebrating the idea that Jesus did not die and go to hell or purgatory or anywhere at all, but rather arose into heaven.

"But he was wounded for our iniquities, he was bruised for our sins: the chastisement of our peace was upon him, and by his bruises we are healed." Isaiah 53:5 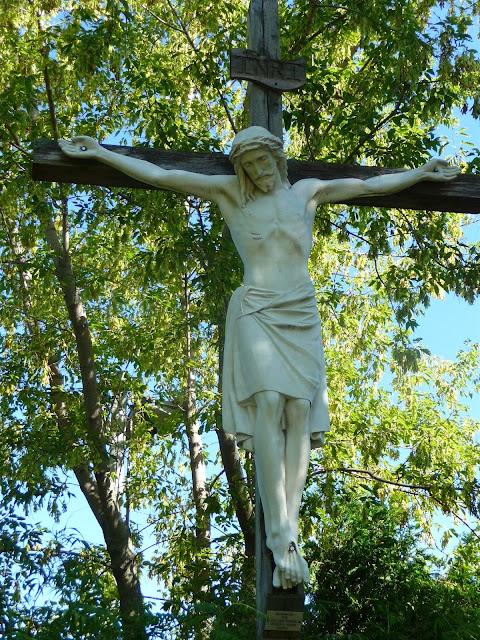 Posted by Mary Ann Kreitzer at 12:25 PM No comments:

Our Lover Comes; How Will You Receive Him?

In 2010 I posted this article by a dear priest, Fr. Robert Lange, who went to his eternal reward in 2015. On this Holy Thursday, I think it is worth repeating. I will be praying for Father at the service this evening. I hope you will too.

And did you know that The Law of the Church is Communion on the Tongue? Receiving in the hand is an indult, an exception to the law, that was given to the bishops of the United States because of widespread disobedience by the flock, disobedience that many of the bishops encouraged. Sad, isn't it, the damage done by false shepherds acting more like the hireling? May we all pray and fast for our bishops and clergy that they will be able to say with Christ, "Zeal for your house consumes me." (Psalm 69:9, John 2:17) 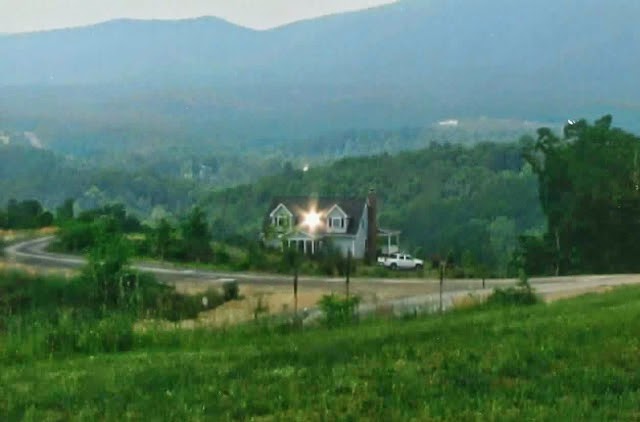 Respect For Christ In The Eucharist – One Priest’s Perspective

[The picture above is of my home in Fort Valley, Virginia, and the light is coming from my chapel where the Blessed Sacrament is reserved. There is not light in the window and there is no sun out on the day of the picture.]

What do you think of this? Sounds like it started as a tornado response in Oklahoma

Looks like it would provide more protection than getting under your desk. Read more here.

Posted by Mary Ann Kreitzer at 6:30 AM 4 comments:

Snowflakes on the March

Last year on this date, I wrote about the snowflakes. I revisited that post today because of the snowflakes' big march, also call the March for Our Lives. It got me thinking once again about the snowflake generation that runs from chalk messages on the sidewalk but is happy to join a bullying mob like the students at Providence College who went after Michael Smalanskas for daring to promote marriage between one man and one woman.

The tragedy in Florida's Parkland school deserves a response, but not a rally reminiscent of liberal mob events used by leftists to stir up crowds against (take your pick) aristocrats (the French Revolution), the czar (the Russian Revolution), Catholics (the Protestant Reformation), Jews (Nuremberg rallies), the NRA and gun owners, etc.

Read more »
Posted by Mary Ann Kreitzer at 6:30 AM No comments:

The Passion Begins.... For the Underground Church in China

Bishop Guo, underground bishop of Mindong, was arrested yesterday along with his diocesan chancellor. It seems appropriate that this terrible situation is taking place during passion week!

What is especially tragic, however, is the part the Vatican is playing in the persecution. The headlines below highlight the betrayal of the poor, persecuted Catholics of China who have risked much to continue praying in the underground Church that remained faithful to the Holy See. In today's modern Church, it seem no martyrdom goes unpunished. The real bishops are being asked to step down so government-appointed bishops of the faux Catholic Patriotic Association can take their places. Is Et tu, Brute the proper reaction or Do you betray your master with a kiss? Perhaps both.

I continue to read St. Francis de Sales' Sermons on Lent. On Palm Sunday, the focus was on humility
and obedience. St. Francis is a master of the spiritual life and we can certainly benefit from meditating on his writing during this Holy Week:


Everything in the world has two faces, because everything has two principles. The first is God, the first cause of everything that exists. The second is the nothingness from which everything has been drawn. Now, since God is the first principle of every being, there is nothing that does not contain something beautiful and lovable in it. But since very created things is drawn out of nothingness, each contains some imperfection.

Holy Week begins. The betrayal is imminent, a betrayal that continues throughout history like the expanding ripples in a lake. Judas isn't far from us. He lives in our hearts and we can see him in the larger events occurring around us as I realized once again this morning with sorrow.

I was reading a LifeSiteNews article reprinted in The Wanderer about Cardinal Zen and his dismay over the Vatican betraying China's underground Church and recognizing the unfaithful bishops excommunicated by previous popes.

The suffering Church in China must be feeling the same betrayal as Catholics in England watching their bishops bend the knee to a lustful monarch who began the systematic dismantling of the Church. Except for St. John Fisher, I'm not aware of a single courageous English bishop who defended the faith.

Read more »
Posted by Mary Ann Kreitzer at 6:00 AM No comments:

I don't believe in American exceptionalism. As a country with fallen leaders running things, we are just as prone to commit evil as other countries when we stray from Christian principles.

Did you know that Adolf Hitler got lots of ideas for his eugenics policies from Cold Spring Harbor, the Long Island eugenics laboratory? Hitler was actually a Johnny-come-lately to the field. American scientists were way ahead of Dr. Josef Mengele, the infamous German "angel of death" who performed terrible experiments using prisoners of war and Jews, including children, as his lab animals. His experiments with twins are infamous. You can read about the roots of the Nazi eugenics program here.

Sheik of the Burning Sand

Huma Abedin suggested I post this video. Only kidding. I wanted to post it before it's taken down by YouTube censors since National Enquirer' s magazine, THE NEW KINGDOM, features Saudi Crown Prince Mohammed Bin Salman on the front cover.

Read more »
Posted by Susan Matthiesen at 9:39 PM No comments:

STOP! Think of a dead baby every time you consider eating a Girl Scout Cookie!

Do you think anyone would buy a box of Thin Mints if the body of a dead baby "decorated" the cover?" It should. Because every time you buy a box of Samoas or Thin Mints or any other cookie from those cute little green-clad leprechauns outside the Walmart, you support the biggest abortion provider in the world, Planned Parenthood. LifeNews posted this yesterday about the Girl Scouts:


Girl Scouts USA (GSUSA) has become a politically divisive, pro-abortion organization that has abandoned its mission years ago. GSUSA is the largest member organization of the World Association of Girl Guides and Girl Scouts (WAGGGS), which aggressively promotes abortion and promiscuous sex on behalf of its 10 million members. WAGGGS states that “anyone who is a Girl Guide or Girl Scout is automatically a member.” GSUSA pays about 1.5 million dollars annually to WAGGGS.

The Reign of Terror at Providence College: When Catholic Schools Embrace Evil

[Sign the Petition to Providence College and please pass it on. Let's make this go viral!]

First they came for Professor Anthony Esolen... See The Wolves are Howling.

All the Sickening Sickness is Sick - Penis Facials, Eating Human Meat and the Peace of Islam

How sick is sick? Sickness is all around us. It's everywhere - not the sickness of being ill with a disease but the sickness of people doing sick things. Immoral things. Evil things. And each day that dawns brings one more immoral evil sickening story. The following happened in the last three days. Three!

A mother in Oklahoma married her own son then had the marriage annulled after incest charges, then she got hitched to her daughter after the government legalized gay marriage. The daughter had that marriage annulled because she said her mother had led her into it fraudulently. That entire scenario is sickening!

Read more »
Posted by Susan Matthiesen at 6:00 AM 3 comments:

It's all over the Catholic blogosphere. Fr. Frank Phillips of the Canons Regular and pastor of traditional parish, St. John Cantius, has been removed (very publicly) for unspecified "credible allegations" of improper behavior with adult men. Is it true? Who knows at this point. It's under investigation.

Bishop Emeritus Rene Gracida posted on his shock and disturbance at the way the situation is being handled:

Message from the Squirrels: Adoption not Abortion

The world would be a better place if we all acted like squirrels. If a squirrel finds an abandoned baby squirrel, it will adopt the baby and take it home and raise it. Think about that, you pro-abortion folks. Are you really less loving than a squirrel?

Posted by Mary Ann Kreitzer at 3:43 PM No comments:

How Much Evil Comes about Through Sacrilegious Communions?