Bring Back Reverence! How? Here are a few suggestions.

"Jesus gives us his living, beating heart in the Eucharist." Bring back the Communion rail.
Fr. Mark Goring

Since Vatican II all kinds of abuses have crept into our liturgies. I remember the clown Masses, the home Masses with no liturgical vestments, the guitar and mariachi Masses, the butterfly vestments, the crepe paper rainbow and cracked pot in the sanctuary, the sand in the holy water fonts during lent. My goodness, the list is endless!


Things have actually improved since the height of nonsense in the 70s and 80s. Many vestments still look like rain ponchos, but the chasubles so familiar at the Tridentine Masses of my youth are coming back in some places. And even the modern vestments are beautiful in many cases.

But have these improvements been sufficient to restore the faith?

How many Catholics believe in the Real Presence today? Very few if the surveys are accurate. A recent PEW survey found that only 1/3rd of Catholics believe the bread and wine become the Body, Blood, Soul and Divinity of Christ. That's a disaster! Most Catholics reject the core teaching of our faith.

Is it any surprise? We see our churches turned into social halls with parishioners laughing and talking after Mass in front of the tabernacle.

No silence, no reverence. Do they believe Jesus is present as they turn their backs on Him to chat (loudly) with their friends? Their actions show no evidence of it.

I'm happy to say, in my own parish, the pastor is doing things to emphasize the Real Presence and increase reverence. In the past few weeks, he is singing more of the responses (a directive of the bishop) and has reintroduced the Latin singing of the Sanctus and Agnus Dei at daily Mass. I'll find out tomorrow whether he's reintroducing the Latin at Sunday Mass. I certainly hope so. 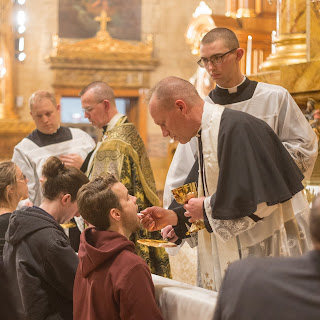 Last Sunday, the deacon gave a terrific homily on the Real Presence. Was the congregation listening? The social hall atmosphere at the end of Mass went on unabated. I told the pastor the next day that we were at a parish in Colonial Beach recently (St. Elizabeth of Hungary) that has a sign as you enter the church.

Some people still talked as they left the Church, but it was fewer. The pastor's homily that day was on the four last things: death, judgment, heaven, or hell. He minced no words. Wow! It was a brave teaching and I thanked him for it. We need more of that coming from the pulpit.

There are so many things pastors can do to increase belief in the Real Presence. Fr. Goring's plea to restore the Communion rails with people kneeling for Communion is one. Urging people to receive Christ on the tongue is another. Introducing more Latin and sung responses in the liturgy emphasizes that what we are doing is DIFFERENT from secular pursuits. Saying Mass ad  orientem would visually witness that the priest is the shepherd leading the people rather than an entertainer facing them. So many showmen priests act like stand-up comics at Mass.

All of these reforms would offer teaching opportunities as well.


You get the idea.

Pray for priests and encourage those who are making efforts to increase reverence. They often are under attack both from liberal parishioners, from their liberal brother priests, and from their bishops. We need to make sure they know their efforts do not go unnoticed. Gratitude is a virtue we need to nurture.

I have been kicking around speaking with our priest about the sad situations of most of the parishes in our area (including ours) regarding reverence (or lack thereof) in our churches.

It is... well, so sad. You hit it right on in your description(s) of such Catholic parish-churches.

I have to admit I am more than a little chicken about bringing this up to him. However, with the survey regarding the percentage of Catholics who actually believe in Christ's True Presence, this may be the opening I was looking for.

Please pray for me, Mary Ann. I want to do this the right way - without making our pastor upset. (he does not like Latin, he likes guitar Masses, applause at Mass, many EMoHC, etc.)

I totally sympathize, Kevin. It's so hard. Priests have so many challenges and I'm sure they get tired of critics. I think our pastor is truly disturbed at what's happening. Prayer and encouragement are the ticket I think. We are all called to be like Mary gently encouraging, praising what we can, and gently objecting to what is wrong. When we visit churches that have ways of encouraging reverence I try to share them. Our son's parish in Texas has a wonderful pew card about proper dress, reverence, etc. The lector urges people to read it before Mass and they also have the rosary before Mass which discourages chatter. I certainly will pray for you and beg your prayers for me as well.

First off, I like your site and go to it everyday and get a lot out of it so I am not trying to be critical. Thank you much for this site and your work.

I think this priest is very holy and sincere and I appreciate what he is trying to do. However, all the suggestions that many conservative priests make such as bringing back the altar rail, the priest turning towards the altar, no communion in the hand, longer fasts, etc. etc. are just skirting around the true problem. They keep piecemeal trying to bring back all the things that existed before Vatican II. To come up with a true solution, it is imperative that the problem be recognized and that problem is Vatican II. A stake must be driven into the heart of Vatican II. This is what must be discussed as it covers all of the troubling issues. The solution is to turn back to everything that was pre-Vatican II, not just skirt around it and come up with piecemeal solutions. That takes courage and I see no bishops and cardinals with enough courage to do it unfortunately. This will never be resolved without this recognition. A problem cannot be solved unless the problem is defined and recognized. Best regards.

Thanks for your thoughtful comment, DB. I have to reflect on it more.

There were certainly problems with Vatican II, especially its ambiguity, but there was much also that was good. The encouragement of the laity to be active in defending the faith for one. It also affirmed the importance of Latin having pride of place in the liturgy which was pretty much ignored by the innovators.

I like the expansion of the readings at Mass particularly the psalms. Of course that all could have been done within the TLM. At this point I think scrapping the Novus Ordo would result in more Catholics leaving the faith. Too many people are used to it, like the vernacular, and would just walk out the door. Do we really want that? Any changes need to be gradual. My pastor is reintroducing the Latin Sanctus and Agnus Dei at daily Mass. I hope to see him do it to the Sunday Mass soon.

What was done in the name of the "spirit" of Vatican II was horrendous! But at this point it is the experience of most Catholics. To try to mandate the TLM -- well, I just think it would make things worse. I like to encourage people to experience the TLM. Some will love it and embrace it, but not everyone.

I recently read a prediction by a traditionalist that the Novus Ordo will disappear in 100 years and the TLM will once again be the Mass for all. I think that's an overly optimistic view. Msgr. Pope wrote an article a few years ago about the need for those of us who love the TLM to evangelize for it. He put the responsibility on the laity. We have a lot of work to do.