Sometimes it is the unexpected that gives us the most joy.  This was the case for us last week when in Salerno, Italy we had a chance to visit the Cathedral of St. Matthew.  After visiting many old churches, I thought I had probably become a little ho hum about what I might find in the next one.  Statues and columns and grand works of art by the masters can be found in all of them.  What’s left to amaze you after you’ve seen the grandest there is to offer?  The answer is simplicity.  The kind of thing even a child could recognize and appreciate.


We were in Salerno because it was one of the ports of call  our ship docked in for a day.  Many aboard went off on long excursions on buses that would take hours.   We opted to stay nearby and see what we could find on foot.  We were told to consider the Cathedral of St. Matthew, built between 1080 and 1085, so with no other particular goal, we took the shuttle from the dock to the center of Salerno and were told to follow the street we were on to the clock tower several blocks away in the distance, and then, turn left and go up the hill.  Italians always tell you, “It’s about a ten minute walk.”  I’ve learned their ten minutes means nothing. 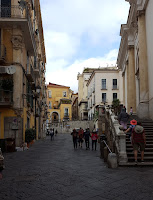 When we reached the tower I expected a large intersection and a street wide enough for passing cars, but what we found was hardly more than an alleyway.  Up the hill we went expecting some grand plaza in front of an imposing cathedral, but instead, tucked in among apartment buildings and shops there was only a well worn set of marble steps leading to the front door of the church.  Inside the doors we were then in an atrium.  Michael Rose describes it this way in his book, Ugly as Sin:
“On a much smaller scale than the piazza is the atrium, an open courtyard (recalling the forecourts of Solomon’s Temple) that’s more of an integrated element of the church building.  In the center of the atrium, which is surrounded by colonnades of a cloister, is a fountain, where our pilgrim 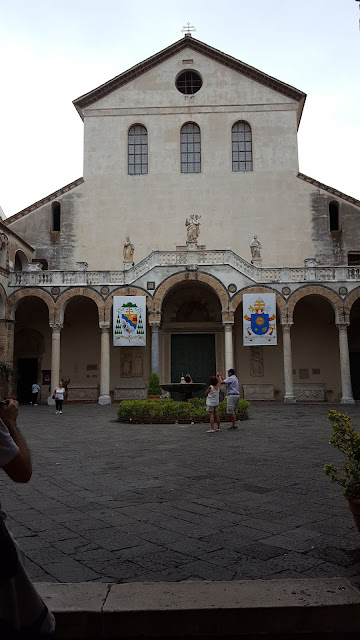 washes his hands before entering the church.  …….Once the pilgrim draws near to the church building, standing perhaps in the atrium, he comes face-to-face with the façade, that is, the front exterior.” 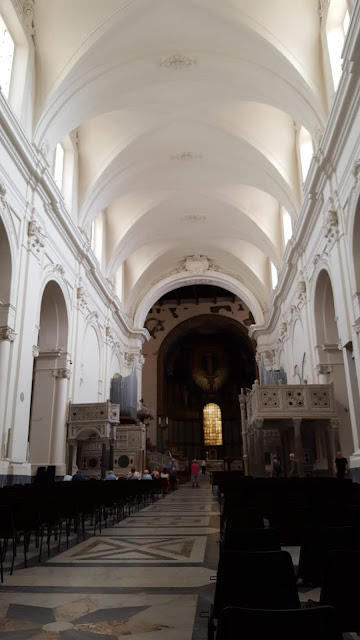 We entered the church and found it very plain and unadorned.  A little bit of a disappointment after a strenuous walk to find it.  We noticed a coin box for donations from those who wanted to walk down the stairs to view the crypt.  We jingled in our Euros and descended the marble steps to see what lay below.  What we found took our breath away. 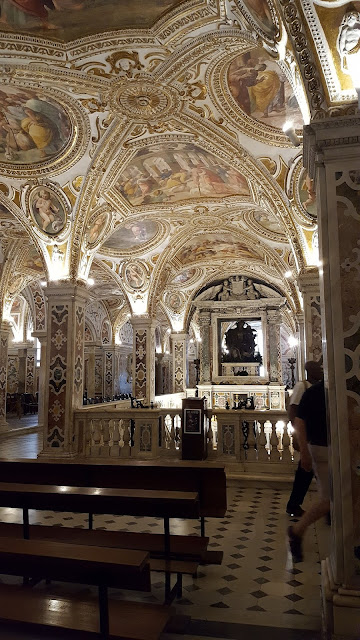 The ceiling frescoes in the crypt where the bones of St. Matthew are kept were painted by Belisario Corenzio and depict scenes from the life of Christ.  Corenzio lived from1588-1643.  They are part of the history of the church which has included earth quakes and the allied invasion of the town, still held by Germans, in 1943.
Seeing the walls and ceiling completely covered in glorious art, I felt compelled to sit and pray and as I did, I starred up at the ceiling and to my surprise, I could actually recognize what I saw.  As I continued to pray one Hail Mary after another, I soon realized the whole ceiling was a series of paintings, frescoes, of all the events in Christ’s life with which we are so familiar whether it is from the mysteries of the rosary or from easy to recall events spoken of in the Gospels.

These are not difficult to identify, in fact, a child with any knowledge of Bible stories could tell you right away what they are.  I decided it would be easy enough to photograph each one of them and possibly turn them into a photo book with accompanying scripture text.  I especially like the uncomplicated nature of the scenes and the happy way most are portrayed.  The more you look at them, the more you smile and the more you smile, the more you know you have just stumbled upon a real treasure few people know exists. 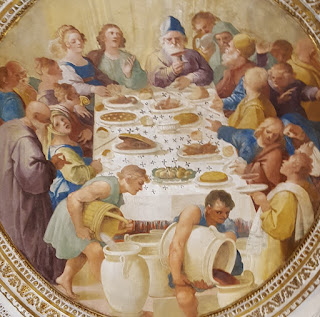 I am not including captions with these pictures because you will know them when you seen them.  They are uncomplicated and even though surrounded in gold filigree and cherubs, they speak to the world in a language we all can understand.  You can almost hear Joseph chuckling as the baby Jesus coos while his foot is kissed by the wise man. 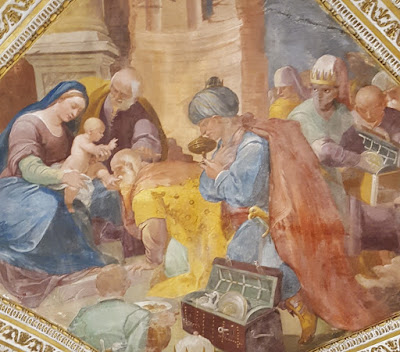 This one I especially love with Jesus asleep and everyone else fearing for their lives. 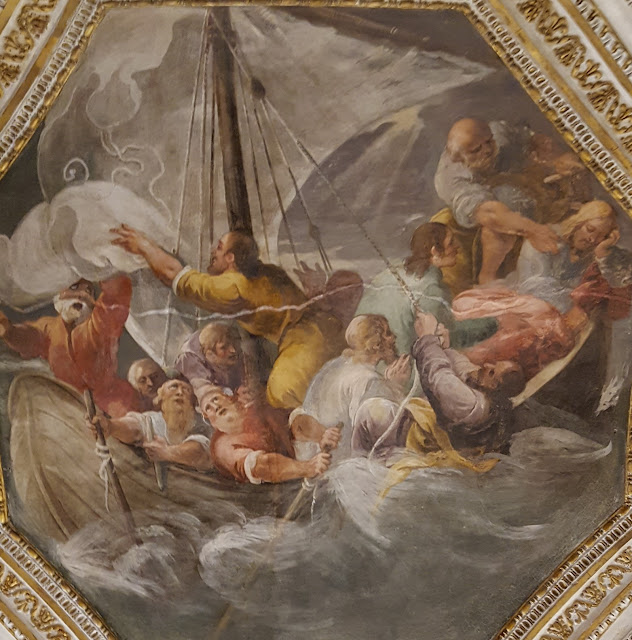 Beautiful! When you print that book, I'll buy several as gifts. Please let us know.