Where were you when the Supreme Court's atrocious Roe v. Wade decision unconstitutionally abortion overturning laws in all 50 states of our country? My husband and I were on our way to teach our high school CCD class at St. Louis parish in Alexandria. We ditched the lesson for the night and, instead, focused on the moral evil of abortion.
legislated

The feminists and their allies gloated in 1973 and prophesied that abortion was here to stay and the issue would disappear within a year now that the court had spoken. Little did they know that there was still a God in the United States who would raise up an army to defend the little ones and their mothers.

Today's first reading at Mass is a biblical metaphor for the fight.

David previously refused to wear Saul's armor to face the Goliath. He stands before the king as a shepherd, clad lightly with no helmet or shield and no weapon but his sling. Saul urges him to reconsider facing the giant. How can a "mere youth" stand up to the seasoned, armor-clad, sword-bearing Goliath surrounded by the Philistine army?

David's reply is swift and confident. "The Lord, who delivered me from the claws of the lion and bear, will also keep me safe from the clutches of this Philistine." And he faces the taunts of Goliath with the same manly courage, confident in the Lord's help and protection:

"You come against me with sword and spear and scimitar, but I come against you in the name of the Lord of hosts, the God of the armies of Israel that you have insulted. Today the Lord shall deliver you into my hand; I will strike you down and cut off your head. This very day I will leave your corpse and corpses of the Philistine army for the birds of the air and the beasts of the field; thus the whole land shall learn that Israel has a God. All this multitude, too, shall learn that it is not by sword or spear that the Lord saves. For the battle is the Lord's and he shall deliver you into our hands."

A veteran of the battle of the beasts, David did not fear Goliath. Who was Goliath compared to the lions and bears that threatened his flocks? Scripture tells us David "ran quickly toward the battle line." And as he ran he took out one of the five smooth stones he collected from the wadi. With one sweeping throw, he struck Goliath who fell like a giant oak tee prostrate on the ground. David finished him off with his own sword.

What do we have in the pocket of our shepherd's bag? What five stones do we carry into battle? The first two are the Mass and Confession, sacraments that fill us with the grace to fight with courage even the greatest evils of our time. We fight in the name of and with the grace of the Lord! The third stone is the rosary, the scapular, and other sacramentals like holy water, blessed salt, the miraculous medal, etc. They surround us with protection and remind us of where we come from and for whom we fight. The fourth stone represents Mary's legion of angels. No Christian is ever alone. He goes into battle with his guardian angel at his side and St. Micheal and the heavenly army as his cohort. The fifth stone represents the saints who have fought and won their individual battles and now fight with us interceding before the throne of our King.

It's easy to be disheartened at the state of the world. Things seem to be falling apart and the forces of evil appear ever stronger and perhaps even invincible. Are they?

The very rabid nature of their assaults shows their desperation! A cornered animal turns and bears his fangs. Satan knows that his days are numbered and that he cannot win against the Lord our God. Our victory lies in embracing the love and law of the Lord. The more kindly we treat our enemies, the more we neuter them. Ultimately evil destroys itself. Hate kills; love gives life!

If anything, the rally in Richmond on Monday showed the power of love. It was a lesson in 1 Corinthians 13. Everyone I saw in the crowd waiting in lines to get in (and out) of the caged area was patient. Everyone was kind. I didn't hear one curse or foul word or see an unkind (or obscene) gesture. I heard people thanking the police, excusing themselves as they made their way through the dense crowd. I saw strangers helping a man on the curb who appeared to be having a health problem. I heard Christians praying together. I saw people engaging in friendly conversations with the numerous police officers on duty, thanking them for their service. I saw people with trash bags picking up what little litter there was in the streets. The only sad thing to me was passing St. Peter's Catholic Church, trying to go in for a visit and finding the doors locked up tight. Shame on the pastor and the parish congregation. What a missed opportunity to show hospitality to the body of Christ.

The March for Life on Friday will see hundreds of thousands in Washington, D.C. with the same spirit of love witnessing to the sacredness of human life. And no matter how long it takes, we will persevere to bring our founding documents to reality. The fundamental right in the Declaration of Independence is the right to life. Without it, other rights are meaningless! 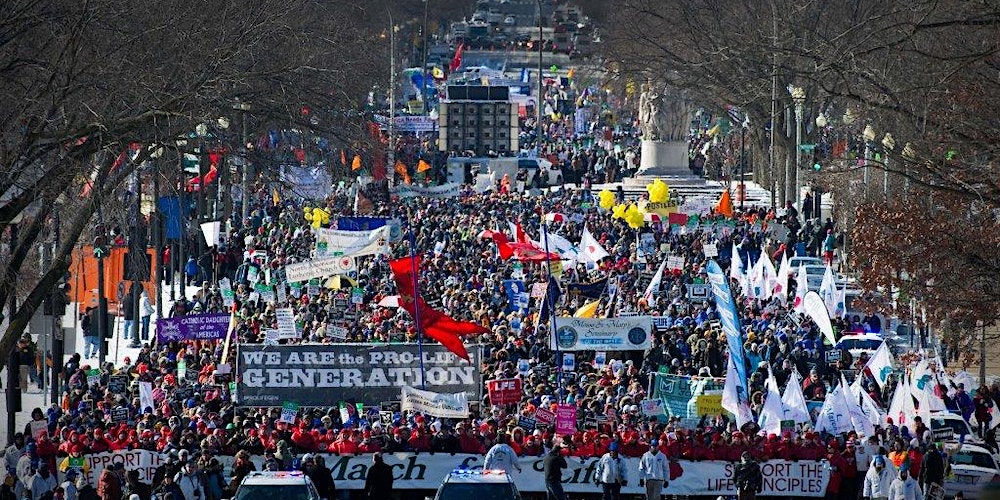 I got up this morning thinking about Tim Kaine and Nancy Pelosi who profess to be Catholic while they live the lives of Herod, Nero, Hitler, Stalin, Mao, and every other tyrant of history who murdered hordes of helpless victims. Think of what good they could do if they turned from their evil and embraced the Lord of life. I'm praying for their conversion and the conversions of all those politicians, especially professed Catholics, who do the work of Satan, a murderer and liar from the beginning.

May God give us the grace to love our enemies and do good to those who hate us while we work to spread the Kingdom of God.

May Jesus Christ be praised!

David hated Goliath as he expressed in his words..
"You come against me with sword and spear and scimitar, but I come against you in the name of the Lord of hosts, the God of the armies of Israel that you have insulted. Today the Lord shall deliver you into my hand; I will strike you down and cut off your head.”

Davids’ Godly hatred is exactly opposite of “love everybody all the time no matter what”.

Also…”There is a sin that leads to death. I am not saying that you should pray about that” 1 John 5:16. “So do not pray for this people nor offer any plea or petition for them; do not plead with me, for I will not listen to you. Jer 7:16. God does not listen to prayers on behalf of the baby-blood-drenched wicked. Pray for the murdered babies instead.

God bless you, keep up your invaluable work.