The Other Side of Francis -- Things for which to be Grateful!

Being thankful is a virtue -- first of all to God, of course, but then to those who deserve our thanks. And so I present this article from Crisis Magazine,  The Politically Incorrect Francis—14 Shocking Statements. Author, historian Paul Kangor begins it writing:


Let’s be honest. Actually, let’s state the obvious. Many orthodox Catholics have had it with Pope Francis, as have non-Catholic conservatives who liked previous popes. It’s no stretch to say that a good number detest him. At the very least, many faithful Catholics are frustrated by the current pope. What with the ongoing confusion from Rome, atop the 2018 abuse report from Pennsylvania (with many more states to follow), plus the Cardinal McCarrick fiasco, and the Viganò letters—their patience is exhausted.

I understand. Francis frustrates me, too, though I don’t hate him and often defend him, particularly with the very points I’ll make throughout this article.

And here are a few excerpts from the article which you may dismiss as just window dressing, but the context of some makes that difficult. Read these and the full article and comment if you like:


1. Gender theory is all the rage at our crazy universities, but it flatly enrages Pope Francis. He is an unrelenting adversary, comparing gender theory to “the educational policies of Hitler.” And of Satan. “Gender ideology is demonic!” he thundered in the summer of 2015. It militates against “the order of creation.”

2. “If there’s a doubt about homosexuality, it’s better not to have them enter the seminary,” Francis told Italian bishops last May. “If you think that the guy is homosexual, don’t put him in the seminary.” If there’s any suggestion of an inkling of homosexual inclination, said the first supposed “gay pope,” the who-am-I-to-judge pope, then keep his carcass out of seminary.

“I say to the priests, gay religious men and women,” said Francis, “we must urge you to live fully celibate and, above all, to be exquisitely responsible, trying not to scandalize your communities or the holy faithful people of God by living a double life. It is better that you leave the ministry or consecrated life rather than live a double life.”

“For this reason,” said Francis, “the Church urges that persons with this rooted tendency not be accepted into ministry or consecrated life.” He lamented: “In our societies, it even seems homosexuality is fashionable. And this mentality, in some way, also influences the life of the Church.” [On this one, I have to say his actions speak a lot louder than his words! His promotion and coddling of the lavender mafia in the Church speaks a lot louder than these words!]

3. In November 2014, speaking to no less than the European Parliament, the Holy Father condemned “dictatorships of relativism” (invoking his predecessor’s phrase), as well as what Francis called “ahistorical fundamentalisms, ethical systems without goodness, and intellectualism bereft of wisdom,” which, among other things, disregard and discard human life. “Whenever a human life no longer proves useful for that machine, it is discarded with few qualms, as in the case of the terminally ill, the elderly who are abandoned and uncared for, and children who are killed in the womb.”

To make that statement to the European Parliament required real courage. It was a great moment. As John Allen put it, Pope Francis issued a “strong call to Europe to get both its social and its spiritual house in order.”

It's a long article, but I encourage you to read the entire thing. I think history (if the world lasts long enough to have our era in history books) will condemn Francis if he continues as he has. But this article demonstrates the possibilities of Francis. 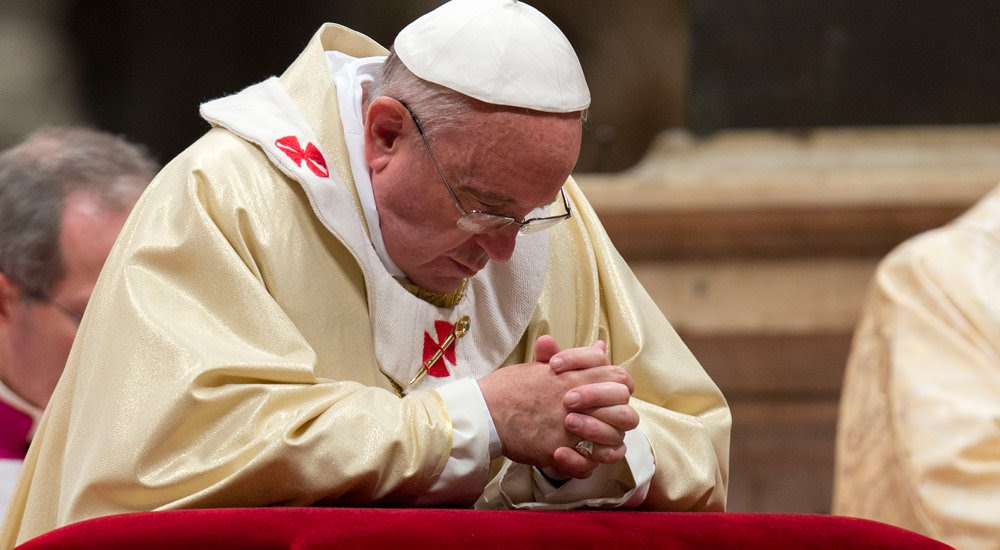 Remember the great conversions of the past. Think of the great persecutor of the early Church, St. Paul. I thought immediately of Dr. Bernard Nathanson, one of the greatest enemies of life, who became one of life's greatest defenders.

Do we love the pope? Do we want what is best for him? Do we pray and sacrifice for him? Or do we only blast him with both barrels on every possible occasion?

I need to examine my own conscience on this. In the meantime, for today at least, I will try my best to be mindful to pray and make little sacrifices begging the Holy Spirit to make Francis the pope God wants on the chair of Peter.

Most Sacred Heart of Jesus, have mercy on Pope Francis and us.

Immaculate Heart of Mary, pray for Pope Francis and us.

St. Joseph, patron of the universal Church, pray for Pope Francis and us.

St. Peter, Rock of the Church, pray for Pope Francis and us.
Posted by Mary Ann Kreitzer at 8:55 AM

I'm not buying it because for each of these 14 points, we can point to its opposite that Francis has demonstrated. Abortion - Emma Bonino, sodomy - James Martin, gender ideology - welcoming the trans couple at the Vatican and saying that God made them this way, etc.

Many of the 14 points overlap, making the number actually smaller - more like only 4 or 5. Therefore in 7 years he has made 4 or 5 statements, to which he has clearly demonstrated its opposite.

Kangor's #2 statement about the devil serves as a good example. While Kangor says that Bergoglio says that the devil wants infertility, Bergoglio also said that Catholics breed like rabbits and gave high praise to Emma Bonino, Italy's leading abortion pusher.

In addition, Bergoglio broke the First Commandment by supplying demons for Catholics to worship not only in the Vatican Gardens but inside St Peter's in front of the Tomb of St Peter.

So, no. If Bergoglio can say that Christianity and Islam are equals - basically that Christ and Muhammad are equals - then I can say I do not believe a word of any of his 14 statements. After all, a broken clock is correct twice a day. All the rest of the time it's not correct, therefore is broken, therefore need to be REPLACED.

He did lift the "Pontifical Secret" for child sexual abuse. but one could say that was to discredit previous Popes. Yet, I must admit how disappointed I was to read that both Cardinal Gagnon and Fr Hardon went to the now declares Saith Pope John Paul Two over the Bishop Ryan case and others and according to the CMtv three part series with RCF , Saint John Paul Two did NOTHING reportedly stating he feared schism if he did.
Hardly an icon of Saint Peter Damian !

Then there was the Maciel crimes he knew about as well documented by the CDF since the fifties , not to forget also Mr Grien's testimony that on the occasion MCcarrick left him the room with the saint as a child he did confide in him the abuse he was enduring.......
Yes Borgoglio has zero compunction against communism but what exactly was JP2 ?

Let's not forget "SAINT" JP2 kissed the Koran at Assisi.

I am with Susan on this. The man speaks "out of both sides of his mouth". But look who he elevates, assigns, and promotes and surrounds himself with. Look at the destruction of religious institutes and even Vatican dicastries...the Knights of Malta even. He is a destroyer, sad to say. He is all about immigration of infidels and climate change and supports the evil UN agenda. One could right a book~! And every once in a while throws out a Catholic bone. Yes, we can pray for his conversion.

Well...to play the devil's advocate here with regard to Francis and Islam, HIllary Belloc considered it a heresy. I disagree with him. Many historians link it with Judaism and Christianity as one of the three monotheistic religions. I disagree with them too unless you want to say that believing in a false god is monotheistic if you just believe in one instead of a whole group.

I agree with everyone who points out the disconnect between the pope's words and his actions and I disagree with the author's opinion that Francis is just a dupe. I fear he may be a freemason with malice aforethought in everything he does. The devil doesn't mind speaking the truth as long as he can poison it with a lie.

I still think we can be grateful for the truth when he does speak it and pray that he will embrace the truth in all its fullness.

By the way, Susan, I love you. Come visit me! We can carry on a Socratic dialogue about truth. Shall we imitate Socrates, take up our lanterns and search the world for a wise man?

Do a search on "Cardinal Zen" on the blog and you'll get a number of articles on the Chinese situation written since 2018. I'm just finishing up Cardinal Sarah's book, "God or Nothing," and the next one in the queue is Cardinal Zen's "For the Love of My People I Will Not Remain Silent." What the Vatican has done to the faithful in China is horrifying. And all the reports indicate that since the 2018 detante with the Communist government the persecution has gone into high gear.

Francis and particularly Parolin have much to answer for. May God preserve the Chinese underground from "friends" like them.

With all you have admitted can you not at least concede agnosticism about the papal identity?

LOL! Sure, Anonymous, if it makes you happy. Frankly, I have no idea what you mean when you say, "with all you have admitted." I had no idea I was the accused in the dock. But I love courtroom dramas so I'll play the part. Bring on the prosecution.

I love the truth (I mean Jesus Christ THE TRUTH). I hope I would be willing to die defending Him like all the Christian martyrs of history. I hope I would have the courage.

In the case of the current pope (or anti-pope as I guess you believe -- Do I have that right?), I don't know the truth. You obviously feel like you do. I respect your conscience. I don't criticize you or condemn you for saying you don't believe Francis is the pope. I would appreciate the same respect for my conscience in not making a determination about something I don't feel qualified to express an opinion about.

If, in conscience, I'm not sure about a grave matter, and this is certainly a grave matter, I will not take a position on it as if I have a foolproof answer. And that's my last word on this.