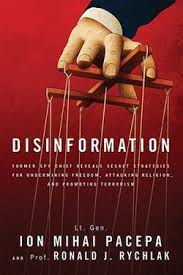 There is a department in the KGB in Moscow named Dezinformatsiya.  The English translation of that word is Disinformation.  We hear Donald Trump talk all the time about “fake news” and I believe whether he understands it completely or not, that this is exactly what he’s talking about.  Dezinformatsiya is a concerted deliberate effort by our enemies to discredit and destroy individuals as well as our religious bodies and the United States itself as a whole.


In his book by this title, Disinformation, writer and ex-communist spy Ion Mihai Pacepa describes the program that has been ongoing since the end of WWII to “undermine freedom, attack religion, and promote terrorism.”  Too many times defectors have simply sought protection and have left their jobs out of fear.  Only some of the times are defectors actually leaving behind an ideology to embrace real freedom in a Judeo-Christian world.  Bella Dodd is one well known example of this kind of true defector and I believe Pacepa is another.  I finished reading his book about two weeks ago and it is still floating around in my head.

In this article and perhaps in the next several, I want to share a few things that have really made a deep impression on me because I think they are clearly evident in the current campaigns of members of the socialist loving Democrat Party.

To begin with I want to connect two things that are very startling, to me anyway.  One is a remark Donna Brazile included in her book which was released in 2017 during the campaign of Hilary Clinton when the internal workings of the Democrat National Committee seemed to be in disarray.  I heard her discussing this comment on television and at the time I was simply disgusted by the thought, but it didn’t occur to me that it had a far deeper meaning than I heard on the surface.  This is a link to the whole article in which Brazile is quoted. She is actually restating something in her book that was told to her by another progressive liberal, but she was only too happy to do it.


She recalled a conversation with former Rep. Tony Coelho, who once asked her of a political campaign: “Are the kids having sex? Are they having fun? If not, let’s create something to get that going, or otherwise we’re not going to win.” Brazile wrote that she “didn’t sense much fun or [sex] in Brooklyn.”

The reference to Brooklyn was to the Hillary campaign headquarters.  But there’s another connection I want to share with you from the book Disinformation.  This is a very crude and vulgar quote that follows, so be prepared to smell the sulfur after you read it.  Pacepa says,


In July 1953, I was charged to help organize an international congress of the Federation Mondiale de la Jeunesse Democratique (World Federation of Democratic Youth) held in Bucharest.  The task of this youth congress was to denigrate American efforts to stop North Korea’s expansion of communism.  My boss of that time, General Penteleymon Bondarendo---Romanianized as Gheorghe Pintilie---put the final touches on my preparation.  …….he was universally known as Pantyusha, his Russian nickname.


Pantyusha explained to me that ‘those f*cking students easily got excited about f*cking injustices and had a f*cking short fuse when it came to violent protests.’  That made them ‘putty in our hands, and we could mold them into any f*cking thing we wanted.’  My main task was to mold them into anti-American protesters.


As an intelligence officer, I was still green, but I eventually had to agree that Pantyusha knew his students.  The young people attending the congress were put up at student hostels set aside for them in Bucharest, and I bunked with them.  The walls of the hostels were plastered with articles and photographs supposedly documenting the abominable crimes committed by America’s Genghis Khan-style military, generating violent anti-American reactions from the young visitors.  Free alcohol was available in the hostels, which helped fuel the rioting.


At night, most of the young people, led on by the Swedish delegates, wandered buck naked from room to room, looking for sexual adventures.  In short, the congress was one colossal, uninhibited party, and the only price of admission was the special fun of yelling out anti-American epithets.


On July 27 of that year, while the youth congress was running full steam ahead, Romanian radio announced that an armistice in the Korean War had been reached that day.  ‘American imperialism has been soundly defeated,’ the radio blared.  Wild celebrations broke out.  The debauchery born in the youth hostels spread to the streets, building up into night and day, anti-American hysteria.  I was part of it.  The next day, the Romanian government organized a ‘popular’ meeting in Bucharest to celebrate the occasion.  It was the first American defeat in the international arena and was royally feted.  I remember joining in, shouting, ‘Yankees go home!’”

Post script – I am currently retyping the full testimony of Bella Dodd to the Committee on Un-American Activities so I can use it to show the connections from the transcript recorded in 1953 and the same communist tactics being used by the Democrat Party today.  So far I have typed over 20,000 words.  It may take a few more days, but I have come across some little known facts I believe need to be brought to light.

I encourage all readers of this blog to consider reading the book, Disinformation.  It begins with the communist smearing of Pope Pius XII and continues through the assassination of President Kennedy and forward into the world of anti-Semitism and terrorism that haunts us today.

I don't understand why you had to use the phrase, ' We hear Donald Trump talk all the time about “fake news” and I believe whether he understands it completely or not, that this is exactly what he’s talking about.'. I think that is a put down of our President! Of course he knows what it means, he is the one bringing it to the publics attention. Give him credit for the smart person he is. He's the best President since I have been voting and I'm 81 and have voted in every presidential election since I could vote. Give us a break and support a man that's prolife and believes in religious freedom and the American Constitution.

Excuse me, St. Joan.
No one likes this president or supports him more enthusiastically than I do.

Trump understands well the "orchestrated campaign" to destroy him. My only hesitation is in making the claim that he knows it is part of communist Disinformation that began right after the Russian Revolution and continues to this day.

A look from a different angle: