Home from Retreat -- From Five Days of Silence to.... 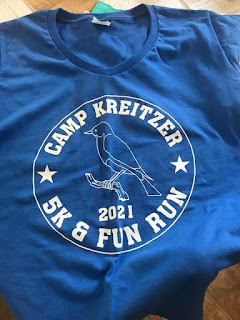 Coming off a silent retreat is always a little bit of a culture shock, this year more than usual since I came home to three of my children and their families settled into Camp Kreitzer for the weekend. One of our daughters lives nearby so they head home at the end of the day, but the other four adults and nine children are in residence until Monday -- five granddaughters in the six-bed "girls dorm" and the four boys in the downstairs family room. The adult couples get bedrooms. We are blessed to have a big house that we bought  to be our family retreat center when Larry retired. We considered the little retirement cottage, but, after prayer, decided that wasn't God's plan for us.

This past year Camp Kreitzer was a refuge for a homeless mom and her son for several months and for a friend transitioning from being a full-time RVer to moving on to another phase in life. But our favorite Camp Kreitzer events involve family. Larry and I are never happier than when Camp Kreitzer is bursting at the seams with our children, their spouses, and our grandchildren. Holidays often see a crowd ranging from all the littles to the adults. 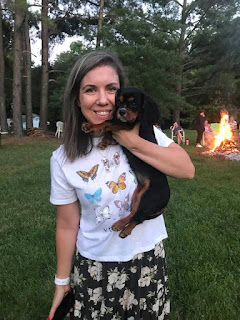 We also have the canine crew joining the fun this weekend -- Alfred, Zuzu, Wesley, Scooby, and Lady were all here cavorting with each other --- with me trying to keep them out of my lily garden. Fortunately, the dogs all get along well. So Camp Kreitzer is buzzing with activity...or should I say barking? One of the dogs is a little confused. He used my son's leg for a fire hydrant. Obviously, Wesley is not the sharpest knife in the drawer.

When my daughter and I got home from retreat everyone was in the pool. Unfortunately, one of the girls has swimmer's ear so my daughter did a quick clothes change and took her off to emergency care where they found a second ear infection as well. Poor Ella! She is now on antibiotics and pool restricted. Fortunately, there's always a game in progress so she will have plenty of alternatives. 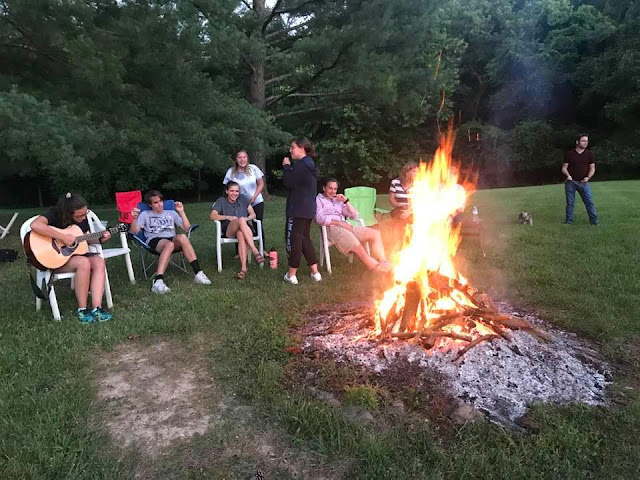 Tonight we all attended the vigil Mass at St. John Bosco in Woodstock. Isn't that the way every good thing should begin? "In the name of the Father, the Son and the Holy Ghost?" Put God first and all the rest will fall into place.

After Mass we ordered pizza. I brought home a big plate of leftover desserts from retreat: red velvet chocolate chip cookies, little lemon cakes, brownies, and chocolate mint chip cookies. At mealtimes, our tradition is that the adults go first. But I told the children they were going first for dessert. They approved. 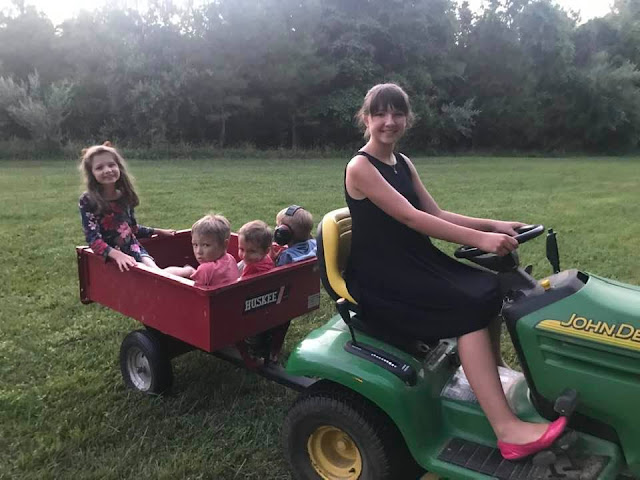 After dinner, the adults and children all brought out chairs to put around the bonfire. The older grandkids gave tractor rides to the younger ones. And then there were s'mores, an "Emo" comedy routine from our son, and "scary" stories. Lots of laughs especially when five-year-old Jude said, "That's not funny!" 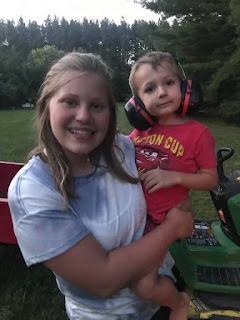 No campfire would be complete without a group sing-along that started out with Almost Heaven, West Virginia, in honor of my husband's home state. We moved on to patriotic songs in honor of the holiday:  The Star Spangled Banner and America the Beautiful. Mia accompanied us on the guitar. Requests came next. I especially liked Brown-Eyed Girl and we enjoyed a poem recitation.

As the clock moves to midnight everyone is settling in with prayers and bedtime, resting up for tomorrow's 5K and fun run at 8:30 a.m. I'm signed up for the shorter walk with the younger ones. And then we'll have a fairy garden contest (where everyone wins), swimming, a cookout and fireworks. It puts an exhausted smile on my face just to think of it, but oh, what a joy! Since the retreat ends with Resurrection joy, it seems a fitting chapter to follow the Spiritual Exercises. 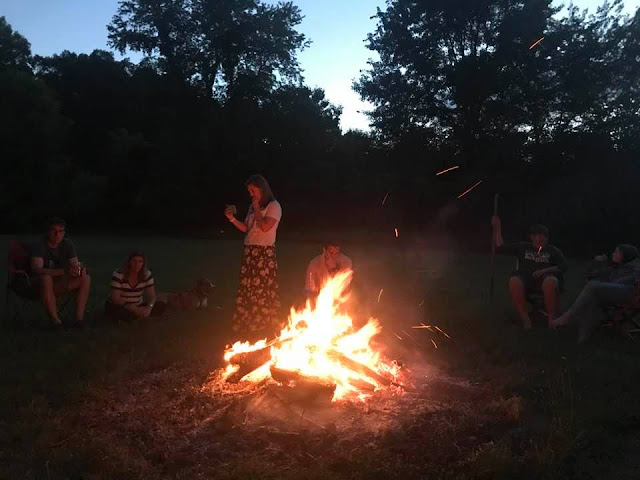 We don't need Hillary's village to raise our children, we have a village of our own, one centered on Jesus Christ first and then the family he gave us. The family that prays together stays together, as Fr. Patrick Peyton said. And I say, "Amen to that! If you're ever in Woodstock, stop for a glass of iced tea at Camp Kreitzer. The welcome mat's always out!

Thank you for sharing your beautiful, Christ centered, family with us. This inspires us all to live for our good Lord and prosper our families in love of God and each other. God bless you and may our country come back to realization that it is the domestic church, families, that enable a strong Christian culture.

A family lead by a devil!

Another generation of white privilege!