To All Those Who Think Every Pope is the Reincarnation of St. Peter.... 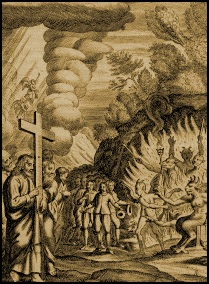 One of the meditations (my favorite) in the Spiritual Exercises is on The Two Standards. The retreatant is presented two scenes. On a hill near Babylon (the city of confusion) Satan appears to be seated on a high throne surrounded by terrifying demons. Smoke fills the air and the howls of the demons assault the ears. Satan urges on his minions to attack all the followers of Christ to gather them into his hellish kingdom. He advises them with wicked strategies for debasing consciences.

The second scene is a plain around Jerusalem (the city of peace) where Jesus gathers all under His banner urging His followers to go out and spread the words of faith, bringing all to a knowledge of His love and mercy.

All of us at one time or another have served Satan. Every time we sin we turn away from the banner of Christ. Even if we only take a small step in the direction of Babylon, in that moment we are in serious danger. That's why we need to run to the confessional, kneel before the king and beg him to forgive our unfaithfulness and welcome us back into his service.

What about a pope? He, as Mundabor points out, is sometimes described as "sweet Peter on earth." But what if, in reality, he is "bitter Satan in hell?"

The Church has had many bad popes. But there still exists a number of Catholics who believe every word spoken by the successor of Peter is infallible and must be obeyed. Like the current motu proprio abrogating Summorum Pontificum, Pope Benedict's apostolic letter saying that the Latin Mass (TLM) was never forbidden and. in fact, any priest could say it without permission from his bishop or from Rome.

Now Pope Francis has overthrown Benedict's work (and the work of every pope since about the year 700). The liberal dissenters who love contraception, abortion, and same-sex marriage are chortling! Fr. James Martin, in his usual way, is claiming to reverence the latin Mass, but he "enjoys" the vernacular and quotes the dissenters at the National Fishwrap to bolster his opinion which, of course, favors the decision of Francis to suppress the TLM.

But their celebration is pointless. The document takes Francis one step closer to being recognized for what he is -- a pope heretic. He is also a liar as the document and the letter accompanying it show. He misrepresents Pope Pius V's action of regulating the Roman missal at the request of the Council of Trent. Remember, in 1570 the Protestant Revolution was in full throttle. They had their own Mass and innovations were creeping into the celebration of the Mass. Actually, what Pius V did to protect the Mass from innovations was more comparable to Pope John Paul II and Benedict allowing the Latin Mass according to the 1962 missal.  There are many rites in the Church (Byzantine, Maronite, etc.) the "extraordinary form" of the Roman rite could be treated like them which would make tremendous sense. But sense isn't Pope Francis' strong suit.

The other thing that screams out from that letter is the claim that the survey of bishops revealed divisiveness rather than respect, for the TLM. Francis puts his bombshell in the context of "responding to your [the bishops'] request." Is that true? The survey has not been released. Did the bishops experiencing the results of the TLM in their dioceses really condemn it? I seriously doubt it. The fruits of the TLM are incredible (as I discussed yesterday in this post). Or did the condemnation come from Pope Francis' buddies like Cupich, Tobin, Gregory, not to mention all those homosexual-promoting cardinals  and bishops in the St. Gallen mafia with which he surrounds himself? If there is any divisiveness, it's among the bishops themselves many of whom are obviously serving under the standard of Satan.

Let's face the facts. It isn't the first time an evil man has sat on the throne of Peter treating it like a toilet. (Remember Pope Francis' discussion of "coprophilia” and “coprophagia”. They are so disgusting I won't define them. Look 'em up. I had to.) 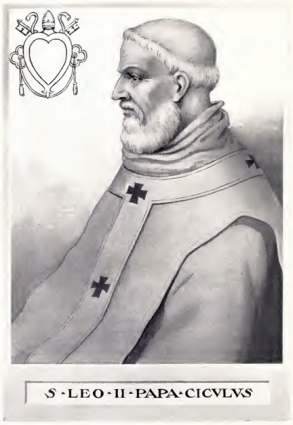 For those who believe every pope is a saint, let me give you just one
example, Honorius I, who served from 625-638. Thirteen years! He was anathematized, by name, by Pope Leo II and the Third Council of Constantinople. Does anyone truly believe this man was given to the Church by the Holy Spirit? No Honorius was elected by men. He promoted the heresy of the Monophysites when he proclaimed that Christ had only one nature, the divine.

No one should go ballistic over what's happening. The TLM will not disappear. The Holy Spirit protected it after Vatican II when the Mass in many places became a circus side show. The Holy Spirit will protect it now. Remember the words from St. Luke's gospel: "Fear not, little flock, for it hath pleased your Father to give you a kingdom." We see the glory of that kingdom every time we attend the TLM. It will not be taken from us no matter how many lovers of Pachamama attempt to destroy the Bride of Christ. It ain't going to happen no matter how many Judases sit on Peter's chair!

Not gonna happen. Nope. I did the same thing.
A Pope suppressing the Mass.
Must admit- never imagined such a thing.
May god have mercy on us and deliver him.