The Pachamama Monstrance: Waiting for the Fire and Brimstone on that Church 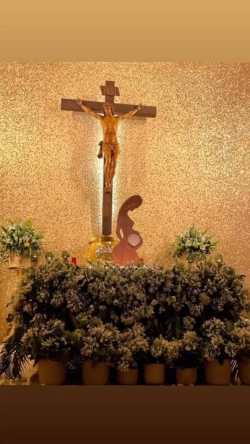 For those who are not outraged at the sight of a demon from hell containing our crucified Lord in its “womb”, on the High Altar, please allow me to explain what Pachamama is:

“Pachamama is a goddess revered by the indigenous peoples of the Andes. In Inca mythology she is an "Earth Mother" type goddess, and a fertility goddess who presides over planting and harvesting, embodies the mountains, and causes earthquakes.” (Wiki)

A “deity” representing nature. Does Pachamama close the book on Nature Deities, or are there others?

“In nature worship, a nature deity is a deity in charge of forces of nature, such as a water deity, vegetation deity, sky deity, solar deity, fire deity, or any other naturally occurring phenomena such as mountains, trees, or volcanoes. Accepted in panentheism, pantheism, deism, polytheism, animism, totemism, shamanism, and paganism, the deity embodies natural forces and can have various characteristics, such as that of a mother goddess, "Mother Nature", or lord of the animals.”

What is Asherah you ask? The most common and persistent of all false gods worshiped by the Jews which brought about their utter destruction.

Asherah Poles: “An Asherah pole is a sacred tree or pole that stood near Canaanite religious locations to honor the Ugaritic mother goddess Asherah, consort of El.”

Consort of El, eh? And who was “El”? “... the supreme god of the ancient Canaanite religion”.

Pachamama is as ancient as an Asherah pole. Pachamama is the synthesis of all idols of all time.

Our Priests and Bishops, including (esp) the Bishop of Rome are worshipping false gods and demons. The picture you see above is a false god, an idol, a demon from hell ancient as the world itself, desecrating the Holy Eucharist. Outrageous. The schism is quantifiably real and blatant. There is no avoiding it: every Catholic must choose sides and do something about it. The fence is not an option to sit upon during wartime.

An abomination.
“How much longer, Lord?”