Can You Trust the AMA? Not by a Long Shot! (Pun intended.)

They want you to take the jab. And the AMA doesn't
mind lying and manipulating you to get you to do it. Below, I've reprinted an article from Dr. Mercola's website posted today. Since the articles are only up now for 48 hours, I copied in it full for those interested. But if you just want the highlights in a brief synopisis here's what headed the article:
STORY AT-A-GLANCE
The Winter 2021 “AMA COVID-19 Guide: Background/Messaging on Vaccines, Vaccine Clinical Trials & Combatting Vaccine Misinformation,” issued by the American Medical Association raises serious questions about the AMA’s adherence to transparency, honesty, ethics and the moral standards to which it will hold its members. The guide lists nine “key messages” the AMA wants doctors to focus on when communicating about COVID-19. This includes stressing the importance of eliminating nonmedical vaccine exemptions, the importance of flu vaccines and COVID shots, and expressing confidence in vaccine development. In the guide, the AMA instructs doctors on how to disinform the public using psychological and linguistic tools. This includes explicit instructions on which words to swap for other more narrative-affirming choices. Word swaps include changing “hospitalization rates” to “deaths,” two terms that are not even remotely interchangeable. Swapping the term “Operation Warp Speed” for “standard process” is another rather egregious misdirection. The two are not interchangeable. In fact, they’re diametrically opposed to one another.

Let's get specific. The AMA produced a guide filled with lies and misinformation, with distorted language to rival the newspeak of 1984. There are several tables in the article that everyone should examine closely, especially the "language swap" and the interview techniques. This is how the majority of the country, no the entire globe, is being manipulated to accept totalitarian government and these so-called scientists are helping achieve that end. I've highlighted what I see as the most important sections. I learned years ago that I need to be my own health advocate and an advocate for those I love. Consider, some of these doctors are abortionists. Others happily engage in assisted suicide and euthanasia of their patients. No every scientist in a white coat has your best interests at heart.
___________________________________________

The Winter 2021 “AMA COVID-19 Guide: Background/Messaging on Vaccines, Vaccine Clinical Trials & Combatting Vaccine Misinformation,”1 issued by the American Medical Association (AMA) raises serious questions about the AMA’s adherence to transparency, honesty, ethics and the moral standards to which it will hold its members.
The AMA was founded in 1847 and is the largest professional association and lobbying group of physicians and medical students in the U.S. According to the AMA itself, its mission is to promote the art and science of medicine and the betterment of public health.
How then do they explain this “COVID-19 messaging guide,” which explicitly teaches doctors how to deceive their patients and the media when asked tough questions about COVID-19, treatment options and COVID shots?
Teaches Doctors How to Deceive

“It is critical that physicians and patients have confidence in the safety and efficacy of COVID-19 vaccines as they become available for public use,” the “AMA COVID-19 Guide” states, adding:2

“To overcome vaccine hesitancy and ensure widespread vaccine acceptance among all demographic groups, physicians and the broader public health community must continue working to build trust in vaccine safety and efficacy, especially in marginalized and minoritized communities with historically well-founded mistrust in medical institutions.”

Express confidence in vaccine development
Stress the importance of vaccines

Highlight the need to combat the spread of vaccine misinformation

Adhere to updated ethical guidance for physicians and medical personnel, which says they have a moral obligation to get vaccinated themselves

Give general vaccine recommendations, such as the recommendation for everyone over the age of 6 months, including pregnant women, to get an annual flu shot

Highlight the increased availability of flu vaccines, and the importance of getting a flu shot even if you’ve gotten a COVID injection

Highlight the importance of including minorities, both in vaccine trials and as trusted messengers who can “promote social pressure” to get minorities vaccinated and dispel historical distrust in medical institutions

On page 7 of the guide, under the science narrative heading, the AMA declares it is “deeply concerned that rampant disinformation and the politicization of health issues are eroding public confidence in science and undermining trust in physicians and medical institutions,” adding that “Science should be grounded in a common understanding of facts and evidence and able to empower people to make informed decisions about their health.”3

To that end, the AMA is calling upon “all elected officials to affirm science and fact in their words and actions,” and for media to “be vigilant in communicating factual information” and to “challenge those who chose to trade in misinformation.”

AMA Then Instructs Doctors on How to Disinform

It's a disappointment, then, to find the AMA instructing doctors on how to misinform the public using a variety of psychological and linguistic tools. Perhaps one of the most egregious examples of this is the recommended “COVID-19 language swaps” detailed on page 9.

As you can see below, the AMA explicitly instructs doctors to swap out certain words and terms for other, more narrative-affirming choices. Shockingly, this includes swapping “hospitalization rates” to “deaths” — two terms that are not even remotely interchangeable!

It strains credulity that the AMA would actually tell doctors to substitute a factual data point with an outright lie. But with this swap, are they not telling doctors to state that people are dead, when in fact they’ve only been hospitalized with COVID-19? 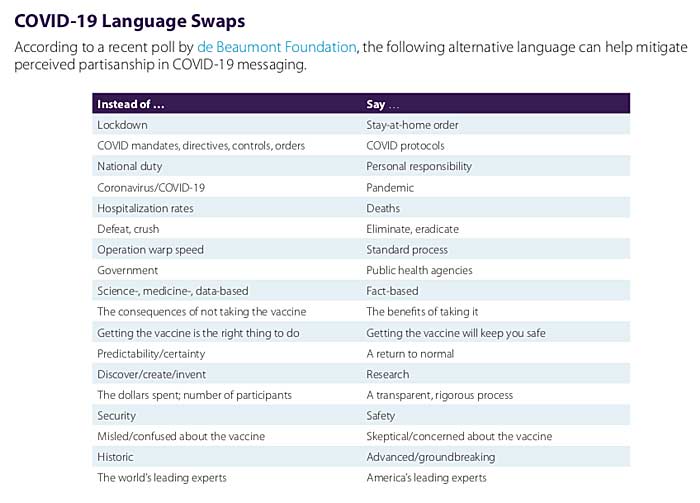 Another highly questionable word swap is to not address the nitty, gritty details of vaccine trials, such as the number of participants, and instead simply refer to these trials as having gone through “a transparent, rigorous process.”

Swapping the factual term “Operation Warp Speed” for “standard process” is another outrageous misdirection. The two simply aren’t interchangeable. In fact, they’re actually diametrically opposed to one another. Standard process for vaccine development includes a long process of over a decade and a large number of steps that were either omitted or drastically shortened for the COVID shots.

Following standard process is what makes vaccine development take, on average, 10 years and often longer. Operation Warp Speed allowed vaccine makers to slap together these COVID shots in about nine months from start to finish. You cannot possibly say that the two terms describe an identical process.

The Power of Language

Other language swaps are less incredulous but still highlight the fact that the AMA wants its members to help push a very specific and one-sided narrative that makes power-grabbing overreaches and totalitarian tactics sound less bad than they actually are, and make questionable processes sound A-OK.

Language is a powerful tool with which we shape reality,4 because it shapes how we think about things. As noted by storyteller and filmmaker Jason Silva:5

“The use of language, the words you use to describe reality, can in fact engender reality, can disclose reality. Words are generative… We create and perceive our reality through language. We think reality into existence through linguistic construction in real-time.”

For example, “lockdown” sounds like involuntary imprisonment imposed by a totalitarian regime, which is what it is, whereas “stay-at-home order” sounds far less draconian. After all, “home” is typically associated with comfort and safety.

How to Steer, Block, Deflect and Stall Inconvenient Questions

The AMA could have instructed its members to simply stick to the facts and be honest — and in some sections, it does do that — but it doesn’t end there. Rather, the AMA provides a full page of instructions on how to steer the conversation, and how to block, deflect and stall when faced with tough questions where an honest answer might actually break the official narrative.

Here’s a sampling of these instructions. I encourage you to read through page 8 of the guide, and pay attention to these psychological tricks when listening to interviews or reading the news.

Steer the conversation back to the narrative by saying:
“Before we leave that matter, let me add …”

Block a tough question by saying:
“That’s [proprietary, confidential etc], but what I can tell you is …”

Deflect an unwanted question by saying:
“That’s a common misperception but the reality is …”

Redirect away from an unwanted question, back to the official narrative by saying:
“I don’t have the details on that, but what I know is …”

AMA Is Rapidly Eroding All Credibility

The AMA’s guidance isn’t all bad. Some of its advice makes perfect sense. But the inclusion of language swaps that result in false statements being made, and tools for steering, blocking, deflecting, redirecting and stalling in order to avoid direct answers do nothing but erode credibility and thus trust in the medical community.

Its direct instruction to not share personal views is another trust-eroding strategy. When people talk to their doctor, they want to hear what that doctor actually thinks, based on their own knowledge and experience.

They don’t expect their doctor — or a doctor appearing in an interview — to simply rehash a narrative dictated by the AMA. If we cannot trust our medical professionals to give their honest opinions and give direct answers, there’s little reason to even discuss our concerns with them, and that’s the opposite of what the AMA claims it seeks to achieve.

The AMA is concerned about the proliferation of misinformation and eroding trust, yet it’s telling its members to keep their professional views to themselves and lie about COVID deaths. With this guidance document, the AMA is essentially implicating itself as a source and instigator of medical misinformation that ultimately might injure patients.

In a Stew Peters Show interview (see top of this article), Dr. Bryan Ardis criticized the AMA guidance document, pointing out that while the AMA claims it put out the guidance to prevent political ideologies from dictating medicine, it is actually proving that the AMA itself is deferring to political ideology rather than medical facts.

The AMA wants its members to act as propagandists for a particular narrative — using “politically correct language” — rather than sharing information and acting in accordance with their own conscience and professional insight. As noted by Peters:

“If a doctor’s just going to repeat what the AMA tells them, why have doctors at all? You can get plenty of starving propagandists at any liberal college, but instead we want to turn our medical professionals into ideological zombies with stethoscopes.”