The Flashlight: Church Militant's Hit Piece on the Wyoming Carmelites Gets Busted! Part 2

Welcome to The Flashlight where grifters and gaslighters are trapped and exposed.

Augustine Inferrera, Church Militant's whistleblower, did experience two episodes where a monk supervising the building project, Brother Joseph, lost his temper with the young man and physically assaulted him. The brother was charged with simple assault and had to go to court where he pled guilty and expressed his regret. There were no injuries although Augustine reiterates over and over how "violent" Bother Joseph is (a regular Jack the Ripper) and essentially demanded his expulsion. Augustine claims there was no provocation, but we only hear his side of the story. Apparently there were witnesses. What did they say about the events? Did anyone have to physically pull the mad monk off Augustine?

The question that begs to be asked is whether Augustine's version of things at the monastery is exaggerated or misinterpreted? Did he extrapolate from his own past experiences? Did he have a chip on his shoulder? What was his attitude at the monastery? Was he a complainer? Did he try to stir up trouble? These are all legitimate questions. But Christine isn't interested in investigating both sides of the issue. She had her scandal and ran with it!

Christine doesn't really investigate the claims of her poor victims. Their stories are accepted at face value. In fact, she even uses their language in her questioning affirming their version of events. When you ask a witness to describe the "grooming" they allege, you've already taken a position. That's not investigation; it's bias.

And now let me raise two more issues, one from Counterfeit Carmel (CC )and one from Behind the Spotlight (BS). First, Voris and Niles focus on a scandal irrelevant to the Wyoming Carmelites, but a perfect opportunity for innuendo. Voris addresses the homosexual pipeline of gay seminarians coming in from Colombia, South America (beginning in CC about minute 10:50).

What do gay seminarians from Colombia have to do with the Wyoming Carmelites?

What does she tell the viewers? This terrible fact! Two of the monks at Carmel attended one of the seminaries CM alleges was running  a "sex ring." Niles admits that there's no evidence the two men were involved at all, but she smears them anyway asking if being in that "environment" caused them to behave in the ways alleged by Augustine.

No proof... not an iota of evidence... just put the worst possible construction on a situation and lead your viewers by the nose to accept your view that it's one more indication of gross immorality implicating the monks. Mmmm....I think that's a sin against the 8th Commandment!

How many good priests attended bad seminaries? Are they all guilty of....who knows... whatever? Is that really proof of anything? Niles wants the viewers to believe that the two monks are guilty by association. That's irresponsible drivel, more gaslighting.

What if I said, "Christine hangs out with a sodomite who spent twenty years engaging in sex with other men! She must be a pedo-enabler! Are all those young people in the newsroom being groomed?"

Hey, that's the equivalent of what her innuendo did.

Voris and Niles continue gaslighting their viewers in the BS piece when they discuss Bishop Beigler and his investigation. Niles and Voris have a conversation as they preview the video. Niles commented in an earlier segment that the bishop confirmed Augustine's accusations. That is simply not true. It's Christine gaslighting the viewers. Here's the bishops's letter to Augustine with regard to the investigation. 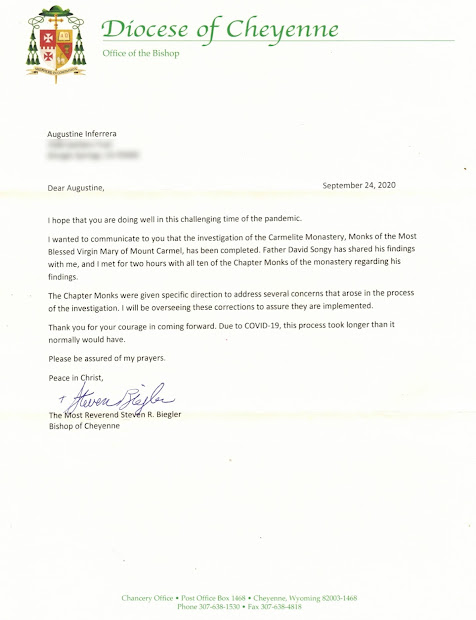 The bishop says not one, single word about the young man's allegations. What were the "concerns" the monks were instructed to correct? We don't know? Did they have anything at all to do with Augustine's serious accusations? Again, we don't know, but since the bishop remains committed to the monks there's reason to believe he did not find it the hotbed of perversion CM's whistleblower claims.

Nevertheless, Niles lies to the viewers. The bishop did NOT confirm Augustine's accusations.  But making false claims that advance the game is what grifters and gaslighters do.

In fact, Niles and Voris also smear the bishop because he didn't respond to their requests, or should I say demands, for comment. As they watch the BS video, Niles confirms to Voris that they asked the bishop's office multiple times for comment and he didn't respond. Bad bishop! (The discussion starts around minute 44:00.) Voris asks if the bishop responded to their multiple contacts. "No," says Christine, "And I can't believe that. I don't understand that. The bishop has a duty to warn the public about what's going on with this monastery and he just refuses to answer any questions."

And how does Michael respond? "Yeah, that's weird."

Right! How dare the bishop not respond to CM? Doesn't he know they are the pre-eminent Catholic media, not just in the U.S., but in the world?

But it's not so weird when you realize that Niles and Voris play the gotcha game with anyone who disagrees with their version of events. Hey, if CM says it's corrupt; it's corrupt.

Why would any bishop trust them? Susan and I have documented many of their lies on our CM page.

Consider that Bishop Beigler is one of the few bishops praised by SNAP, the abuse watchdog group, for his actions defending victims. Maybe he's astute enough to recognize a trap when he sees it. And maybe he didn't find the monks guilty as charged and preferred prudent silence to a back and forth harangue with the grifters at CM.

The best thing to do with CM is to refuse to put your foot in their traps, because anything you say will be used against you. Even your silence proves your guilt. Look at the way they treated the former novice, army infantry vet Nick, when he disputed Augustine's story.  They've been playing that game with the SSPX for years. Expect the double barreled shotgun if you dare to dispute anything CM says. And, what's also very telling, is the fact that they've thrown many former friends under the bus! We document that on our CM page as well.

Sad to say, not many of CM's fans question the breadth and depth (or lack thereof) of Niles investigations or the innuendos, exaggerations, and manipulations so clearly evident in their work. Spotlights always look Hollywood impressive, but how much propaganda goes into each piece? How many empty swings, rainy days, and stock photos of sad children fill the frames? Oh...and don't forget the mood music.

Getting back to the monks' seminary training and backgrounds which Niles uses to imply guilt, let me point out the obvious. In view of Michael Voris' own twenty year active sodomite lifestyle and the bringing on of notorious homosexual Milo Yiannopoulos (whom we'll look at in a future Flashlight episode), could an investigator examining CM use the same type of innuendo to smear them as a homosexual enclave in Ferndale? Perhaps they use their exposure of scandals as cover. Are the clips of them praying part of the act like the statues of the Sacred and Immaculate Hearts in a palm reader's window?

Hey! That's what they accuse others of as they show target priests and bishops praying the Latin Mass.

Maybe it's time for a Spotlight on CM and their staff. It could start with all the articles on our Church Militant page.

"Not evidence...speculation and innuendo." Which reminds me of a quote attributed to the first Mayor Richard Daley of Chicago: "I am tired of all these insinuendos." Huh? And he also may have said, "There are all these allegations about me. But you have to ask yourself, just who are the alligators?"

Same thing with CM. Lots of insinuendos, but we know who the alligators are.

If someone were to follow the money, he might find out what's really going on at CM. I have no idea myself, but something doesn't smell right. Are all their followers real or are they repurposed Twitter bots? I know some investigations were done into CM's largest donor, and the Opus Dei connections he had. Speaking of which, has CM commented on the Bergoglio's recent meddling in Opus Dei?
All I know for sure is that I've never liked Voris' presentation on camera from the very beginning. From the twirling of his finger, to his toupee, to his permanently pasted on smirk: it's all very manipulative and unserious.