A Gift on the Feast of St. Nicholas -- The Scribe: The Legend of Josiam

Editor's Note: I love my readers! Many of their comments are spot on and bring up aspects of a subject that I haven't even thought of. How much they enrich the experience of blogging. I'm so thankful for them. One sent me a short story he was assigned once in a class (in 1991). Students were told to write an original piece about Christmas. I was so impressed with what he sent, I asked to reprint it. I know you will be as taken with the elderly scribe, Josiam, as I was. He makes me think of Simeon in his excitement over the coming of the Messiah. Because of its length, I'm publishing this in two parts. Part 1 is your St. Nicholas Day gift. It may be late in the evening, but it's still that dear saint's feast day. May you enjoy this little gift as much as I did.
THE SCRIBE
THE LEGEND OF JOSIAM
by Thomas J. Walsh 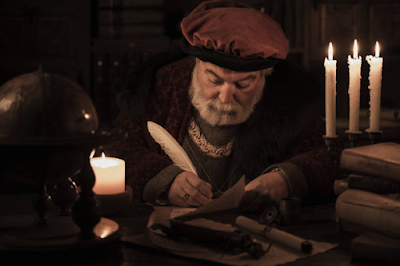 Chapter I
“Josiam, you had best come quickly!” Enos called to the elderly scribe, who was sitting hunched over with his nose nearly touching the tiny wooden desk. “King Herod demands that we attend to him in his court at once.”
Josiam ceased his writing and put the rough parchment aside to dry. Rubbing his tired eyes, he looked up at his breathless companion.
“Why so excited, Enos? I do not recall that the King’s summons have ever before filled you with any particular sense of urgency. Is there perhaps something special happening tonight?”
“Three magi from Persia are in court this hour with Herod,” the younger scribe answered. “I don’t know what the King wants, but he’s calling together all the chief priests and all of us scribes. You know that does not happen very often. Since you are the Chief Scribe, I’m sure he especially wants to see you.”
Josiam gave a long sigh as he unkinked his stiff back, sore from long hours of working at the desk, the joints cracking loudly as he stretched.
“Magi, eh? I met some of those astrologer-priests before. Difficult as it is to imagine, they are even more pompous and self-righteous than our own Pharisees. Very well, let us go see what it is His Majesty requires of us. If nothing else it gives my old body some relief from sitting here.”
When the two historians arrived at King Herod’s throne room, all the other scribes and the chief priests were already present. Josiam glanced around the immense, cavernous room. The bright gold, inlaid in the walls, statues and Herod’s throne, multiplied and reflected every flicker of the dozens of dancing candle flames. The glittering effect irritated the chief scribe’s rheumy eyes, more accustomed as they were to much poorer lighting. He snorted again, as he always did, at the laughable pretentiousness of King Herod. The crude man insisted on conducting himself as if he were a great Caesar of Rome, rather than just a lowly, puppet ruler of an equally lowly, conquered nation. 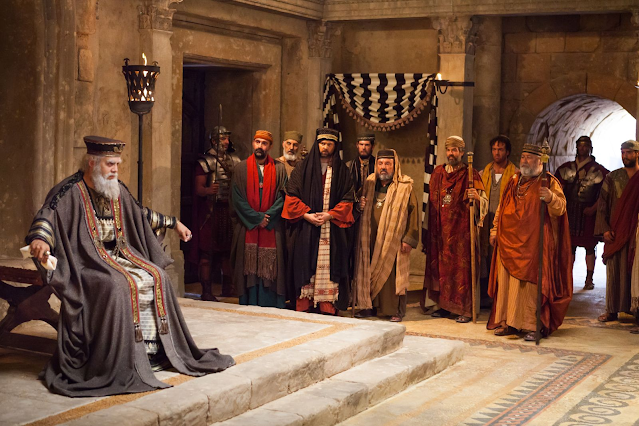 As he and Enos approached the monarch’s seat, Josiam caught sight of the three visitors from the East. They were short men, two of them middle-aged and one about thirty, all dressed elegantly, in robes rich but suitable for hard desert travels. Their skins were a swarthy, dark brown, and their eyes and hair were black. The bodyguards that flanked each of them were uniformly muscular and stone-faced, with long, curved scimitars on their pantalooned hips. The seers themselves piqued Josiam’s interest. Contrary to the condescending aloofness typical of the upper-class Zoroastrians, they seemed very friendly, almost glowing.
“Ah, Josiam, our old friend! How good it is for us to see you again,” the heavyset ruler bellowed. Josiam winced; he knew that the former statement was untrue, and he had serious doubts about the latter. Herod was merely putting on a display of his supposed benevolence for the sake of the three easterners. Apparently, he wanted them to think highly of his court when they returned home, perhaps to increase trade between their nation and Judea.
The two scribes stopped at the foot of his throne and kneeled. Josiam spoke.
“Forgive my lateness, your Majesty. These tired legs can no longer move as quickly as they once did. In what manner may we serve our King?”
“We require to know where the prophecies say that the Messiah is to be born,” Herod told him. “The chief priests tell us that they believe it to be in Bethlehem, but we need to see if our historians agree with them.”
Somewhat surprised by the question, Josiam replied, “I can answer for all the scribes here, your Majesty. The chief priests are correct. The Messiah, when he comes, will be from Bethlehem, a son of the House of David. For it is written thus:

And you, Bethlehem, in the land of Judah,
You are by no means least among the leaders of Judah,
For out of you will come a leader
Who will shepherd my people Israel.”

Satisfied with the Chief Scribe’s reply, King Herod called the three magi forward.
“Now we can be certain,” he said to them. “Since you say that the Messiah was born, your journey shall be south to the town of Bethlehem. There is where you shall find the Messiah, if he truly is alive.” 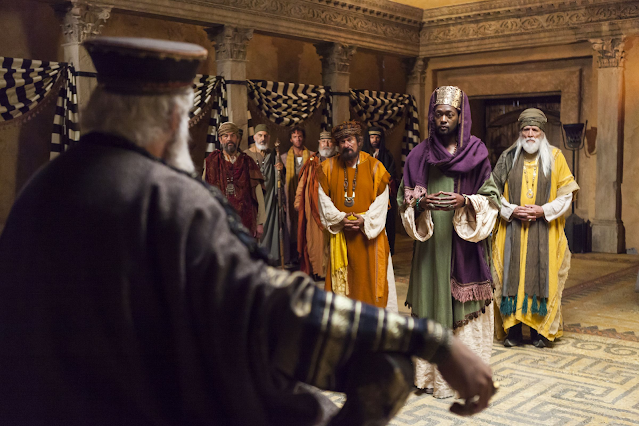 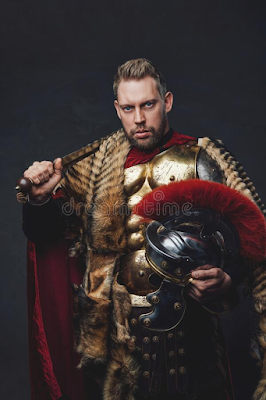 “Have the Zoroastrian astrologers returned from Bethlehem yet, Pelangius?” Herod asked the centurion.
“No, sire,” the captain replied. “We do not expect them for another day.”
The king frowned. “If only we could take your soldiers and meet them on the road, but we can do nothing to risk arousing their suspicions. We must learn where that child is!”
“The Easterners will tell us gladly, sire, and I have a hand-picked company to take with me once they do. These are soldiers I trust to keep their silence. Fear not, the child will not escape us.”
“Arrange to transfer your soldiers immediately afterwards to another province, maybe even kill them if necessary to ensure their silence,” Herod commanded. “We cannot chance the populace hearing any wild rumors that their ‘King of Kings’ was slain. Not that we believe the magi’s tale, of course, but we will not take any chances of losing our crown to anyone, especially some unknown boy!”
“As you wish, sire,” Pelangius answered. With that, the centurion reentered the room, crossed it, and exited through the portal. Moments later, the king returned. Spotting Josiam, he stopped, startled and wary. Fortunately, Herod was already convinced that the old man was losing his sight and hearing faster than he actually was, an assumption that the scribe had always encouraged. Herod studied Josiam for a few moments, who seemed deeply engrossed in his scribbling. Satisfied, he dismissed the matter from his mind, and left through the same door Pelangius had gone through.
Josiam had been frozen in his seat for an eternity, his breath locked inside his frail chest. Slowly, audibly, he gave the air its freedom while he tried to absorb the incredible conversation. Murder the Messiah? He knew Herod was a jealous sovereign, his crown resting uneasily on his head, but that he would slay the infant to safeguard his position was unthinkable! Someone had to stop him! Surely, God would not deliver the King of the Jews after all this time, just to watch him killed by an insignificant monarch? Who could prevent the injustice, and how?
The old man knew the answer already, however reluctant he was to have to acknowledge it. God had put him in this spot for a purpose, and that purpose was frighteningly clear. When King Herod learned of Josiam’s disappearance, he would certainly deduce the clerk’s intentions and act to stop him. His own life would be forfeit, but he had to try to save the Child!
To Be Continued......
Posted by Mary Ann Kreitzer at 9:07 PM