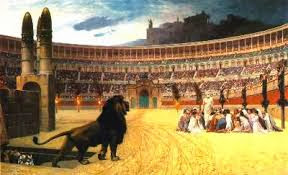 Tyrants play games with the people because they see them as no more than wage slaves to keep their empires going. Remember Rome? Tax and spend with beaucoup bucks spent on the comfort of the elites running the games. So it is with Obama. To keep the slaves riled up and targeting his "enemies" the tyrant is closing down public parks and monuments that require NO federal presence. Closing the World War II Memorial illustrates the game in spades! But I'll let Gary Bauer from the Campaign for Working Families describe what happened next:

As I reported yesterday, the Obama Administration, citing the government shutdown, has "closed" the World War II Memorial. The Park Police were ordered to shut it down. This was a vicious, mean-spirited act by the Obama White House.

The memorial is a circular plaza where visitors simply walk around to read the tributes to the men who defeated Hitler and Hirohito. No federal employees are needed to access the plaza.
Virtually every day members of the "Greatest Generation," men in their 80s and 90s, arrive to see the monument that recognizes their service. The fact that they are being threatened with arrest is disgusting. To add insult to injury, Harry Reid took to the Senate floor to blame Republicans for the fact that the memorial is closed.
Yesterday a bus load of vets that arrived, showing the same spirit they did on the beaches of Normandy but this time with canes and walkers, "stormed" the plaza. Today another group of veterans was reportedly threatened with arrest. But when they arrived this morning, they found many sympathizers, including Republican congressmen, standing with them. Park Police officers reportedly looked the other way and the vets and their friends flooded into the plaza.
Nonetheless, as many as seven National Park employees erected fences to block access by vets this afternoon. As one observer noted, that is two more "guards" than our diplomats had in Benghazi.
But there is a silver lining here. Americans were willing to commit civil disobedience to thwart the thuggish behavior of the Obama Administration, and that is a good thing.

To read more from Gary Bauer's End of the Day Report go here.
Posted by Mary Ann Kreitzer at 10:04 AM