The Dark Side of the Moon

The Dark Side of the Moon, by Anonymous is a book about the terrible events that occurred when Russia took over Poland and exported to slave labor camps all those people who had ever had anything to do with national Polish loyalty.  It is maybe one of the saddest books I've ever read.

Polish general and beloved hero, Wladyslaw Sikorski collected these accounts with the desire to preserve them and share them with the world which needed to know what went on so far away it might as well have been the other side of the moon, shut off from world press and beyond anyone's imagination.  The general died in a mysterious plane crash the soviet pilot managed somehow to survive.  His widow later published  the information he had collected, but did not take any credit, leaving the authorship unknown.
Whereas the communists believed these people were just so many eggs that had to be cracked to create a new society, the fact is they were mothers and fathers, sons and daughters, with ideas of their own, ideas which included God and Christ and the Roman Catholic Church.  Ideas of sin and salvation and right and wrong.  To wrestle these ideas away from those captured it was necessary first to break up families.  Fathers often died from torture and in some cases from depression so deep they lost the will to live.  Mothers forced to support their children were sent to work.   It was the desire of the communists to have the children in Soviet Schools and day care centers.


It was clear to many mothers from the start that only from them would their children ever learn about God and God's laws and his path for us to heaven.  And they were equally clear on the fact that the communists strongest desire was to get these children from them for as many hours of the day as possible so they could pour into their little minds the propaganda it would require for them to be good little communists by the time they grew up.
Some mothers refused to send them, choosing to leave them home alone sometimes for 14 or more hours at a time.  Very little children, as young as age 4 and 5 were taking care of infants in some cases and fending for themselves while mother was at work.  This was of course not desirable for the mothers, but it was completely unacceptable to the communists because it prevented them from getting access to all children.  They soon made it a rule that if your child was not in school, their ration for food would be cut.  Still the mothers kept them at home and did their best to share their own rations with them for as long as they could.  Many of the children starved to death since there was barely enough food for one person in a ration, never mind a family.   Many mothers succumbed to the sad faces on their emaciated children and gave them over to the schools, but some did not.  Those who held their dying babes in their arms said,  "Better they should starve and lose their lives, than live and lose their souls."  That may sound rash, but whereas the soviets knew it would take only a generation to produce an entire society of socialist sheep, the mothers knew it would be a world in which they would never want their little ones to live.
This  link  is not quite as gut wrenching, but it involves exactly the same thing.  History never repeats itself exactly.  The devil is clever that way.  This story though is eerily close and one we should pay attention to.  We are an eyelash away from it happening in this country. 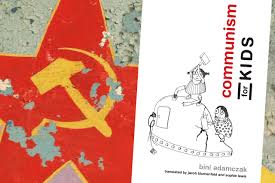 A couple of days ago I posted an article titled, What Difference Does it Make?  The main topic was a book about indifferentism and the loss of faith it produces.  When we relativize the truth and say it is stretchable or deniable, we are not being inclusive or tolerant, we are saying goodbye to any and all conviction that there is a right and a wrong.  With religion there is only ONE truth and to comfort yourself and particularly your children with the idea that all religion is good is a very dangerous thing.  You may think your children will appreciate you for teaching them how to get along as "global citizens," but what you will have done is teach them it doesn't matter if you are a Catholic or not, because your Muslim friends are just as ok as we are, that it is up to you to decide whether religion, any religion is something you want to embrace or not.

This second link is to a story about a book on communism written for kids to tell them how wonderful it can be.  Yes, you read that right.  It is for sale now on Amazon in paperback for $11.65.  This is evil and it is poisonous.  How long will it be before a copy shows up in your child's school library?  How long before it is required reading?  How long before your child tells you about reading it aloud in social studies class?
I am currently reading Animal Farm over the phone with my sixth grade grandson, one chapter at a time.   We are also reading a series of books called Wicked History published by Scholastic.  So far we have read one on Mao and another on Hitler.  Stalin is next.
These little books are wonderful because they don't sugar coat the truth.  They tell it in a way a young person can understand and come to recognize what is evil about certain people, events, and ideologies.  The books are detailed enough to be informative, but short enough to not intimidate a child by the size or length.  I highly recommend them at this point, since I have not found any that disappoint me.

Sooner or later all our children will have to face the truth of this world, but it is better they heard the real story from us than from those who spread propaganda, lies and deceit.  I wish I could say, I raised my kids and it is no longer my responsibility, but I'm not willing to leave it to chance that the ones I love will be somehow magically saved from the  snares of the devil who is forever on the prowl.  Our kids and grandkids are not likely to starve from lack of food, but only if we do our job as parents and grandparents will they escape the starvation of their soul.

Posted by Chriss Rainey at 4:21 PM

Do you think a 9 year old is old enough for these? Also how do you read together over the phone? Do you each have a copy?

My granson and I each have a copy of tbe book Animal Farm. The Wicked History books he reads aloud to his mother when she is driving or cooking dinner so she is there to explain or clarify. Yes, a 9 yr. Old could read them. There is a vocabulary list with definitions, pictures, and a few sidebars which break up the chapters and keep it interesting.

In the sixties my brother and I were those children. At 5 I was taking not so good care of my 4-year younger brother. Mum was leaving to work at 5:45 am and was back around 5pm, and if the bus was late which used to occur on regular basis, after 6pm. She was too tired to do anything with us. Finally, we went to school. Despite "morning prayers" to communism, to people's republic, we managed to keep our faith. Just. Thanks to my mum's persistence to send us to weekly catechism lessons. We did not have any religious books. As a matter of fact books were rarity, apart of the great works of Lenin. Hence, once every few months my mum would get an hour earlier to come to our catechism class and write all lessons, so could learn at home.
Happy mother's day!