Where's Your Faith this Holy Week?

Last Friday I went to see The Case for Christ. It's the conversion story of one man's journey from atheism to faith. Lee Strobel, a reporter for the Chicago Tribune, decided to try to prove that Christianity was false because he was angry when his wife converted. As an investigative reporter with a legal background he pursued his research as though he were putting Christianity on trial. Where did the evidence lead? What did the witnesses, the forensic evidence, the documents, etc. show and how did they impact the verdict? He was a man looking for the truth with the hope it would uphold his atheism. It didn't. Ultimately, he had to follow the evidence to its conclusion and accepted Christianity.

That got me thinking about another man, the so-called scientist Richard Dawkins who wrote The God Delusion. I'm always intrigued by atheists like Dawkins who mock Christians by talking about the "great Teapot in the sky" and use other disparaging and dismissive comments to discredit Christian belief. I've seen Dawkins ridicule a college coed who had the audacity to ask him, "What if you're wrong?" He can't fathom such a thought and, yes, responded by mocking her. Unlike scientists who question and test their theories and answer objections by re-examining the evidence -- Dawkins knows and believes with a maniacal and fanatical faith. Yes, faith! 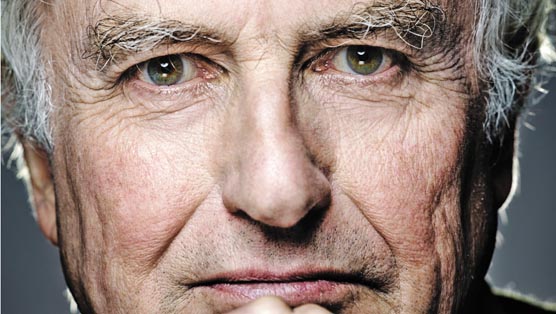 People like Dawkins are, in fact, filled with faith...in nothing. Dawkins rejects belief in God as a superstition. Has he ever studied it? Why bother. He and his colleagues are doctrinaire in their disbelief in Christianity which they address, not by examination, but by ridicule. When you cling to a fanatical faith, you don't need to examine any evidence that might challenge it.

So who is Dawkins' God? As an atheistic evolutionist, he believes that Nothing made everything. His god, Nothing, created all things, not by a plan, but by a series of chance accidents. Now there isn't much evidence for Dawkins' god. There is little, if any, evidence that more complicated organisms "evolve" from simpler organisms. And, even if you address that problem, where did the first "something" come from? The "primordial soup" is one theory, but that opens another line of questions. Who made the soup? If you go with the "big bang" theory instead, what was there to bang? Where did it come from and what caused the explosion? To believe that everything came from a primordial soup or  a big bang takes an incredible leap of faith. And it is a faith based on unproven hypotheses -- faith in things unseen and unprovable.

The proof for evolution just isn't there. Yes, there is "evolution" within species if you want to use that term. We are bigger, in general, than our ancestors and live longer because of sanitation, antibiotics and other drugs, and better nutrition. But we also have a wider range of genetic diseases and most non-neutral genetic mutations are harmful. Cancer, for example, is a somatic mutation that is the 2nd leading cause of death after heart disease which, in many families, also has a genetic component. Are we really as a species evolving into something better through natural selection? It certainly doesn't seem so.

But let's get back to faith -- and The Case for Christ. Here we are in Holy Week when we recall the passion, death, and resurrection of Our Savior. There is more proof for Jesus Christ -- that He existed and rose from the dead, than there is proof for most of the ancient historical figures testified to by archaeology and historic records.

God does not ask for blind faith. Yes faith is defined as "the assurance of things hoped for, a conviction of things not seen." (Hebrews 11:1) But that doesn't mean there is no evidence for our faith. Mary, for example, was told by the angel Gabriel that Elizabeth, her elderly cousin, was with child. That a woman past child-bearing should conceive was "proof" of the angel's words to Mary. Jesus performed signs and wonders testified to, not only by His followers, but by pagan historians. His miracles demonstrated his authority -- over nature, over demons, etc. Yes indeed, God gives us evidence for the truth of what we believe. We just need to open our eyes.

There's an interesting moment in the movie when the actor playing Lee Strobel questions his atheistic mentor. Strobel is struggling with the overwhelming mountain of evidence that Christianity is true. He wants arguments against it. His friend replies that ultimately it comes down to faith in what you want to believe and he has faith in his atheism. It becomes clear at that moment that Strobel's friend won't believe because he doesn't want to believe. His obstinate disbelief reminded me of the parable of the rich man Dives who went to hell and begged Abraham to send Lazarus to quench his burning thirst. When that proves fruitless, he begs Abraham to send someone from the dead to warn his brothers "so they won't end up in this place of torment."

It is the same conundrum of our disbelieving age.

After I read the book, I sent Lee Strobel a letter asking him to pursue the case for the Catholic Church. He never answered it. I don't know if he got it. But that would be a great book for someone to write in the same evidentiary style that Strobel used. It's all there. And ultimately those who seek the fullness of truth with an open mind will find their home in the Catholic Church. Let all Catholics help tip the scales with the proof that the Catholic Church is the one true Church founded by Jesus and grounded in the faith of the apostles and their descendants. Let's share our faith, not hoard it. Everyone needs the bread of life we receive in Holy Communion.

St. Joseph, Patron of the Universal Church, pray for us.
Posted by Mary Ann Kreitzer at 8:42 PM

There have been many studies showing that teenagers lose their faith because of "science." There is a report on those studies here https://www.osv.com/OSVNewsweekly/PapalVisit/Articles/Article/TabId/2727/ArtMID/20933/ArticleID/20512/Young-people-are-leaving-the-faith-Heres-why.aspx
Pew Research has found that 68% of self-identified white, non-Hispanic adult Catholics believe that humans evolved from animals, with or without God's intervention of some kind. They believe that because of the bogus "science" they learned in school. For a complete discussion of that problem and how to preserve the faith of young Catholics see scienceandcatholicism.org

I recommend Tom's book. Help your kids recognize how little evidence there is for evolution and why it makes little sense. You did NOT evolve from a lower organism. You were called forth by God out of love.