Hey! It's not the Jab; It's a Pandemic of Propaganda and Coincidence!

Anyone paying attention knows at this point that something
unprecedented is happening with the experimental gene therapy fraudulently promoted as a "vaccine." The VAERS (Vaccine Adverse Events Reporting System) has never before in its history seen the explosion of deaths and injuries reported from a vaccine. But the geniuses developing COVID policy, like Tony Fauci, assure us that the vaccines are "safe" and all the adverse events are "normal" and "just a coincidence" and not, definitely not, associated with the jab. Or, if they are associated, they are the normal deaths from a normal vaccination and are rare, very rare! And the death and injury of your loved ones are necessary for the common good everyone else (especially the bank accounts of Big Pharma execs and Bill Gates).
Normal! Just a coincidence! Really?
To the tune of several hundred thousand deaths and injuries?

VAERS receives only a fraction of the actual vaccine incidents. And, while some of the adverse reactions may be due to other causes, related or unrelated to the vaccine, the CDC has never, since the inception of VAERS, seen numbers like these. According to Dr. Peter McCullough:

The CDC every year with all the vaccines combined get about 16,000 safety reports and about 25 deaths reported to the VAERS system. So far with COVID-19 they've received over 300,000 safety reports, over 6,000 deaths, nearly 20,000 hospitalizations, I think they're completely overwhelmed," he assessed. [All "just a coincidence! If you believe something different, you are a conspiracy nut!]

Let's pause for a minute to see if Dr. McCullough is worth listening to. (After all, maybe he's one of those "quacks" in tin hats and white lab coats derided by the real medical professionals on board with the vax propaganda.)
Here's Dr. McCullough's bio:

Well-respected North Texas cardiologist, Dr. Peter McCullough has impeccable academic credentials. He's an internist, cardiologist, epidemiologist, a full professor of medicine at Texas A&M College of Medicine in Dallas. He also has a master's degree in public health and is known for being one of the top five most-published medical researchers in the United States and is the editor of two medical journals. Pretty impressive credentials, wouldn't you agree? Dr. McCullough developed his own protocol for COVID which he used on himself when he contracted the virus in 2020 and later on with his father in a nursing home who never required hospitalization. But, hey, Fauci and company would say their cures were "just a coincidence."

The mantra goes on and on and on.... Doctors blowing the warning trumpet are silenced and de-platformed, and, while people collapse and die after the jab, we are all assured that the shot is "safe!" (Safe, dammit! Stop with the misinformation!) Yup, all of these events are "just a coincidence."

Shall we look at some of these "coincidences?" Before you read each headline repeat, “The COVID vaccine is a normal vaccine. It's safe, safe, safe! These injuries and deaths are normal and just a coincidence.” [Hat tip to GoodSciencing.com]

COINCIDENCE #1 Exclusive: Autopsy Confirms 26-Year-Old’s Death (Nov. 21, 2021) From Myocarditis Directly Caused by Pfizer COVID Vaccine. You can read the autopsy report for yourself. This young man died four days after receiving the booster so he was triple jabbed. Oh but the pathologist is probably a quack and a vaccine denier who made up his results. It was "just a coincidence." (It's high time autopsy, after sudden death following the shot, becomes standard practice especially in the young.) And here's a 17 year old Canadian boy who had to the jab to play hockey. Dead from "unascertained" cause, but 2nd pathologist said the jab killed him. How many others?

COINCIDENCE #2 (actually 2-446)  445 Athlete Cardiac Arrests, Serious Issues, 260 Dead, After COVID Shot Goodsciencing.com is keeping track of the deaths and injuries among young athletes in the peak of health. It seems we hear about a death or injury among sports professionals and Olympic contenders almost every week. GoodSciencing has a growing list with names and details, 445 to date. The vaccine status of some is not know for sure in some cases because the professional sports teams, e.g., are not releasing the data. In view of the pressure on athletes to take the jab, though, these deaths and injuries are highly suspect. Scientists would want autopsies, but Fauci and company say the jab is safe and Fauci is an honorable man. Hey, the jab is safe; they are all just coincidences! 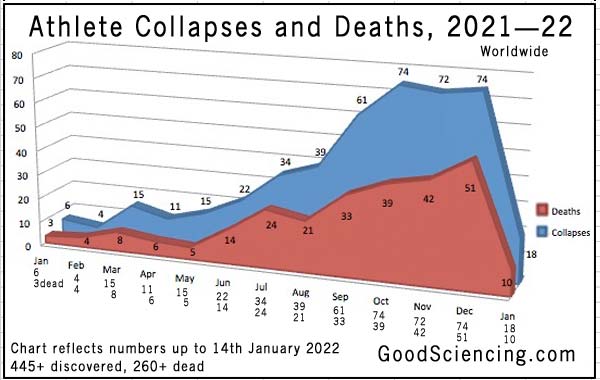 COINCIDENCE #3 He got the COVID shot...now he's gone This young man, 15 years old, isn't the only one. There are many others, young teens, dying from heart problems after the jab. Of course, they are saying he really had a genetic heart condition that had never shown up in any other family members. But, hey, that fits the narrative of "safe and effective." It's just a coincidence that he died shortly after getting the jab.
COINCIDENCE #4 Mom shares how 5 days after second Pfizer shot, her baby died This mom is not alone either. Her baby died in utero at near term. Giving the shot to pregnant women is a crap shoot for the baby in the womb. There are also a number of nursing babies who've died suddenly after their moms took the jab. The emergency authorization for the Pfizer vaccine included warnings against giving it to pregnant women, but that has since changed. After all, the deaths are just coincidences.
COINCIDENCE #5 Fighter pilot injured after taking COVID shot says servicemembers are ‘silenced’ by military Do you fly? Are you a frequent flyer? Army flight surgeon, Theresa Long, warns of the risks to pilots from the jab and recommended grounding any who required hospitalization. Myocarditis is often a silent killer. You can read her affidavit here.
I'm not fond of flying at any time since it's became a cattle-car experience with useless mask mandates. I would in the past fly if necessary.
Not anymore.
Since the airlines began jabbing all their flight crews, I think the likelihood of compromised pilots and co-pilots in the cockpit is a serious risk, not to mention other members of the flight crew. Frankly, I'd rather drive or stay home.
I could continue this list of "coincidental" deaths and injuries ad infinitum, but I'll stop here for now. The jab is a massive, global experiment that is unjustified to treat a virus that over 99% of people get over. Yes, you can get very sick. I certainly did when I had it. But having it gives you a robust immunity. Scientists used to know that. But acknowledging that truth hurts the propaganda of fear.
Those most vulnerable are the elderly with serious underlying health conditions. In general, the COVID deaths have been grossly exaggerated. Dr. Deborah Birx, Fauci's sidekick, admitted that they were classifying everyone who died "with" COVID were being reported as dying "from" COVID. Even some gunshot and accident deaths were reported as due to COVID. So how can anyone believe the bloated statistics.
Many who could have been helped and saved through early intervention and proven effective protocols have died unnecessarily. And the medical incompetence and mismanagement continues!
The pandemic of coincidence is also a pandemic of propaganda and a pandemic of fear. Fearful people are easier to control. The first step is not to listen and not to be afraid. COVID is treatable. Early treatment is essential. Panic is counter-productive. Don't let the fear-mongers determine your behavior. Do everything you can to boost your immune system. Trust in God who is the author of Life and Death, not Tony Fauci. And then follow the advice of Padre Pio.
Pray, hope, and don't worry!

Read Robert Kennedy's book on the Real Anthony Fauci. None of these government agencies are about your health. Neither is he. It is about getting drugs and (the gold egg) "vaccines" on the market even if they are dangerous because they are money makers. Criminals and corruption in these agencies.

Read this article about an Italian doctor who treated 3700 COVID patients without a single death. Some were near death when they came to him. Instead of being praised for his home visits and effective treatment he's threatened with losing his license for not following the bureaucratic protocols. COVID is a political tool and saving patients has always come second to forcing the "vaccines" that aren't vaccines and exercising control.

When I caught the bug at the end of 2020, I was told by hazmat-suited health care workers that there was nothing they could do for me and to call 911 if my lips turned blue. Yay for healing the sick!

Just for the record, I know one or two people who have gotten really sick from the bug, but nobody who died from it. On the other hand, I know a number of people who got really sick or even suffered life-threatening or long-lasting adverse consequences from taking the jab. The process of reporting to VAERS is so labor-intensive and time-consuming that we probably will never know just how many injuries and deaths there have been.

Thank you for another very interesting article! I just saw this video, “DARPA Papers Prove The Jab's The Bioweapon and Fauci Paid Himself More Than $50 Million to Make It” & they show the paper trail in which the elites planned & created this virus in lab with the intent of great harm & the Covid-19 shot was made with the intent of creating even more harm & Fauci lied all through it all, as well as US government agencies, etc. Fauci & Gates & all of those involved need to be prosecuted for their most serious, heinous crimes against humanity.

Thank you for another very interesting article! I just saw this video, “DARPA Papers Prove The Jab's The Bioweapon and Fauci Paid Himself More Than $50 Million to Make It” & they show the paper trail in which the elites planned & created this virus in lab with the evil intent of creating unbelievably great harm to mankind & the Covid-19 shot was made to cause even more horrendous damage & Fauci lied all through it all, as well as US government agencies, etc. Fauci & Gates & all of those involved need to be prosecuted for their most serious, heinous crimes against humanity.
https://rumble.com/vt06l5-darpa-papers-prove-the-jabs-the-bioweapon-and-fauci-paid-himself-more-than-.html