Gays Outraged at the Pope 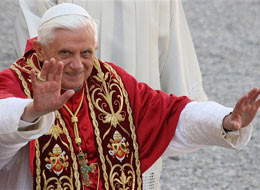 The gays are furious with the pope for speaking the truth recently. An unofficial translation of his statement was provided by the coadjutor bishop of Lancaster, England. Here's what Pope Benedict said:

"Since faith in the Creator is an essential part of the Christian Credo, the Church cannot and should not confine itself to passing on the message of salvation alone. It has a responsibility for the created order and ought to make this responsibility prevail, even in public. And in so doing, it ought to safeguard not only the earth, water, and air as gifts of creation, belonging to everyone. It ought also to protect man against the destruction of himself. What is necessary is a kind of ecology of man, understood in the correct sense. When the Church speaks of the nature of the human being as man and woman and asks that this order of creation be respected, it is not the result of an outdated metaphysic. It is a question here of faith in the Creator and of listening to the language of creation, the devaluation of which leads to the self-destruction of man and therefore to the destruction of the same work of God. That which is often expressed and understood by the term ‘gender;, results finally in the self-emancipation of man from creation and from the Creator. Man wishes to act alone and to dispose ever and exclusively of that alone which concerns him. But in this way he is living contrary to the truth, he is living contrary to the Spirit Creator. The tropical forests are deserving, yes, of our protection, but man merits no less than the creature, in which there is written a message which does not mean a contradiction of our liberty, but its condition. The great Scholastic theologians have characterized matrimony, the life-long bond between man and woman, as a sacrament of creation, instituted by the Creator himself and which Christ-- without modifying the message of creation-- has incorporated into the history of his covenant with mankind. This forms part of the message that the Church must recover the witness in favour of the Spirit Creator present in nature in its entirety and in a particular way in the nature of man, created in the image of God. Beginning from this perspective, it would be beneficial to read again the Encyclical Humanae Vitae: the intention of Pope Paul VI was to defend love against sexuality as a consumer entity, the future as opposed to the exclusive pretext of the present, and the nature of man against its manipulation."

The main issues as I see them are:

1) The Church has an obligation to publicly proclaim the truth about the created order including God's creation of humanity as man and woman. Devaluation of this truth leads to the self-destruction of man.

2) We must protect the physical earth but even more so protect man from his own worst instincts. (Implied here is the reality of original and personal sin which destroy man's integrity and make him an enemy of himself.)

3) The terminology of "gender" is an attempt by man to make up his own theology and be his own God.

4) Matrimony is the "sacrament of creation" that Christ made part of his covenant with mankind. Our liberty is conditioned on the correct understanding of this truth.

5) Humanae Vitae defended true love against the view of sex as a consumer item to be manipulated by every fad and perversion of the age.

Reading the pope's words, it's not hard to see why gay drawers are tied in knots. How dare the pope affirm marriage between a man and woman and imply that failure to recognize the creation by God of man and woman (not a panoply of disparate combinations) leads to the "self-destruction of man." Beyond that to imply gender confusion is just as damaging to the earth as the destruction of the rain forests - what a low blow!

Well, rage against the Vicar of Christ when he speaks the truth illustrates that he must be doing something right. So raise a toast to the pope and pray for his continued courage to bear prophetic witness to a world gone mad. And don't be afraid to imitate him by speaking the truth in love even when they stone you for it.
Posted by Mary Ann Kreitzer at 11:41 AM

Bravo. Spot on! Hip hip and all that. Truth trumps fashion everyday.

Yes, the relationship is procreative and essentially different from a non-preocreative relationship and that is always overlooked. Marriage is a "Tree of Life" for the human race and we are making it into a fruitless fig tree with our birthcontrol pills, abortion and now equalizing same sex marriages.
Mary

Your view on homosexuals is a sin. Harsh judgments against others will land you in Hell. It is wrong. Gay marriage will be part of our life just like every other civil rights issue. You are allowed to vote and interracial marriage is legal. We have a black president. Gay marriage is a civil right that will come to be. You have a very narrow view of the world.