Is this What Catholics of Chicago Can Expect in the Days Ahead?

"The seminary chapel of St. Turibius at the Pontifical Josephinum in Ohio, before Archbishop Cupich became Rector-President and after......he obliterated Christ the King, yet the Pope made him Archbishop of Chicago." (Hat tip to Catholic Conclave.) 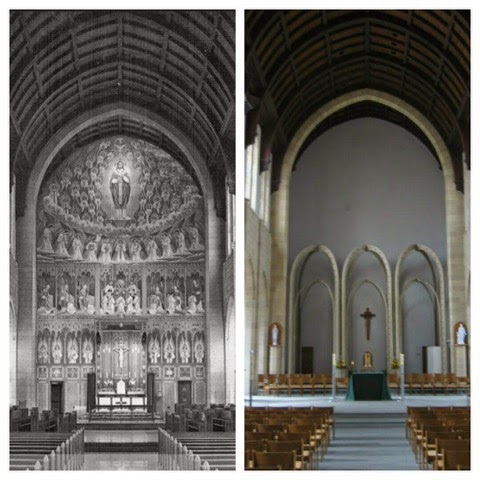 How many beautiful churches are left in Chicago after Bernardin's reign for Cupich to wreckovate?

Note that not only was the beautiful sanctuary destroyed, but the pews were replaced by chairs that don't' appear to have kneelers. And what is that miserable excuse for an altar?

Poor Jesus. Just looking at this makes me want to weep. Maranatha! Come, Lord Jesus, save us from these iconoclasts who talk interminably about their love for the poor while they destroy churches built with the widow's mite by poor immigrants.
Posted by Mary Ann Kreitzer at 4:49 PM

Sorta reminds me of what happened in England during the "reformation".

Terrible loss of our Catholic culture and heritage lost again. This time by our own prelates.

Yup! And just think of the thousands of churches around the country sold and now being used for profane things, like the brewery in Pittsburgh.

The provincial of the men's religious group where we attend Mass, is a native pennsylvanian. And, there are several parishes his order supports there (as well as in CA where I am) and he has been saddened by all the closings there. It's been a source of grief for his family, too.

This is a difficult time for the Faithful. We had our first Thursday devotion yesterday for the increase in vocations. Only, 20 people show up and you know it's the same folks month after month after month. I felt a very strong inspiration and reminder that the Church isn't in buildings but in the tabernacle and the hearts and souls of the Faithful.

Good thing the faith isn't in buildings or it would be half dead! But it is still sad to see so many beautiful churches bulldozed while the 60s monstrosities live on like the walking dead. Like this one -- ugly as sin:

This is exactly why I went to the SSPX for Mass and Sacraments. That was 1997 an I have never looked back. God bless you and Merry Christmas and Happy New Year,