Time to Kiss Boehner Good-Bye without a Tear (Except His!) 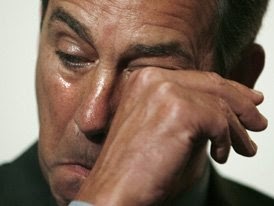 There's a move afoot to dump John Boehner as speaker of the house and I'm all for it. The man is a traitor to conservatism and little more than an Obama lackey. When my old Congressman, Jim Moran, a liberal loon if there ever was one, can say that the CROMNIBUS bill gave Democrats "virtually everything we wanted," you know that the GOP establishment has dissed the grassroots bigtime.

So it's time to say a short good-bye to the RINOs and send them off. Maybe they'll join the Democrats to undo the Republican midterm win. Would it surprise anybody to see John Boehner or Mitch McConnell play turncoat? They're already sporting blue underwear (boxers or briefs?).Here's a bit from an article at World Net Daily describing a project to dump Boehner as Speaker of the House that has garnered a quarter million letters in 48 hours. Let's hope millions pour in as the new Congress is seated:

At the American Thinker blog editorialist Layne Hansen wrote, “It is time to stop thinking of John Boehner and the rest of the Republican congressional leadership as being cowardly and recognize them for what they are: part of The Ruling Class that believes it has the right to tell the rest of us how to live.

“The current GOP leadership has got to go; this has ceased to be an arguable point. We cannot count on these people to do what is right. Conservatives did not give them majorities in both chambers for them to keep playing the same game,” he wrote.

“To retain his position as speaker of the House, John Boehner must receive 218 votes, which is a simple majority. There will be 246 Republicans in the House in the 114th Congress. This means that 29 Republicans must state that under no circumstances will they vote for John Boehner for the speakership. Yes, there are stories of bribery and intimidation by the leadership, but this point in history has to be the conservative caucus’s Alamo. They must stand here.”

Now's the time to do everything you can to make sure your Congressman is one of the 29 who will oppose John Boehner as Speaker in January. Don't know your Congressman? That's okay. Find the information here and write that email or letter today. It really is long past time to give John Boehner his just deserts.

Unfortunately, Dan Bongino is not mine - lost by a hair's breadth.