Does This Help Explain Sacrilegious Communions? 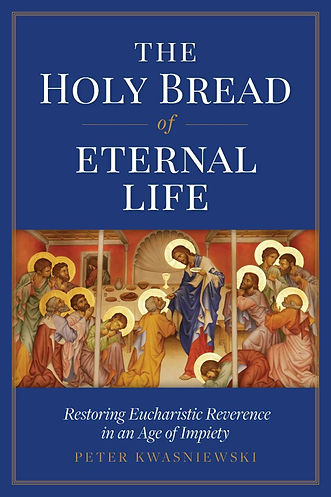 I'm reading Peter Kwasniewski's book, The Holy Bread of Eternal Life: Restoring Eucharistic Reverence in an Age of Impiety. I read several pages each day and reflect, savoring the information and the wisdom. Yesterday I came across something of which I was unaware that exploded like fireworks in my brain! Lex Orandi, Lex Credendi: "the law of prayer is the law of belief," immediately came to mind. Let's see if you have the same reaction.

I was reading Chapter 13, The Omission that Haunts the Church. Since Vatican II there've been beaucoup omissions, but this seemed especially explosive in view of loss of belief in the Real Presence. Speaking of the expanded Lectionary devised after Vatican II with the three-year cycle of readings, Kwasniewski writes that one would expect that the expanded Lectionary would have:

included all of the readings already found in the traditional Roman liturgy (as per Sacrosanctum Concilium 23 and 50), and that, in the wide scope allotted to New Testament books, no key passages would be omitted. Instead, in keeping with a programmatic decision to avoid what they deemed "difficult" biblical texts, the new Lectionary altogether omits 1 Corinthians 11:27-29.

Hmm... What is that passage? Kwasniewski tells us:

St. Paul's "stern warning" against receiving the Body and Blood of the Lord unworthily, that is, unto one's condemnation, has not been read at any Ordinary Form Mass for half a century.

Let me repeat that in bold, highlighted, with an exclamation point:

St. Paul's "stern warning" against receiving the Body and Blood of the Lord unworthily, that is, unto one's condemnation, has not been read at any Ordinary Form Mass for half a century!

In a community that miraculously managed to maintain the use of the traditional Latin mass in the fifty-year period since the introduction of the new Lectionary in 1970, 1 Corinthians 11:27-29 (or vv. 26-27, which deliver the same message) will have been required reading at Mass 150 times. In the same period, it has been read zero times in the sphere of the ordinary Form. How could this not make a difference in the formation of the faithful, clergy and laity alike?

How indeed! It couldn't!

And so we have the collapse of faith. Two thirds of Catholics do not believe in the core doctrinal teaching of the Church, that Jesus Christ is truly present -- Body, Blood, Soul, and Divinity -- in the Eucharist. Is it any wonder that we have self-proclaimed "devout Catholic" politicians committing sacrilege every time they attend Mass and approach for Communion? How many are teetering on the brink of hell, treating the Eucharist like an hors d'oeurve at one of their cocktail parties. Hey, it's all about the people at the party. Who doesn't eat at a party. All are welcome!

According to Kwasniewski, this passage has also been removed from the Liturgy of the Hours. He concludes:

Let us be frank: the concept of an unworthy Communion has disappeared from the general Catholic consciousness, at least in the affluent, self-satisfied West.

And among he "affluent, self-satisfied" Catholic Democrat politicians who routinely give grave scandal by their support for intrinsic moral evils condemned by the Church.

Buy the book! You will grow in your love for the Eucharist and your eagerness to defend the Body of Christ from sacrilege and blasphemy.

As the little shepherds at Fatima were inspired to pray: "Most Holy Trinity, I adore You! My God, my God, I love You in the Most Blessed Sacrament!"

Let us do likewise!

This calls to mind the story of King Josiah, who rediscovered the ancient Law of Moses in a dark, dusty, forsaken corner of the broken down Temple storage lockers, during an extended time of rebellion against the God of their Fathers, idol worship, pagan revelries.

King Josiah rediscovers these scrolls and is so religiously illiterate by this time ... he doesn't even know what they mean. The King of Israel knows the scrolls must be important but the Law, the Word of God is so far from him he can't interpret nor can he understand. So he calls on Hilkiah the High Priest - "Interpret these scrolls; tell me what they mean". When he learns, he is stunned at the disparity between what they say and what he and his nation is. He immediately repents in sackcloth and ashes.

And that, it seems to me, is what has happened and is happening in Holy Roman Catholic Church. Our patrimony has been removed, ripped away unnaturally, taken from us by usurpers and now forgotten by us all. Reading now about elements of our Faith that were once commonly as accepted as the air, we breath, now lost, is shocking to the core. The sheer weight and quantity of that which has been removed and thrown in the trash, and the essential quality of that chosen for removal - shocking.

Your topic on the Eucharist is essential to regaining that which we lost. Another example I have been reading about - Ember Days.

Ember Days were removed, during the time of purging, in 1966. What are Ember Days?

"Ember days (corruption from Lat. Quatuor Tempora, four times) are the days at the beginning of the seasons ordered by the Church as days of fast and abstinence. They were definitely arranged and prescribed for the entire Church by Pope Gregory VII (1073-1085) for the Wednesday, Friday, and Saturday after 13 December (S. Lucia), after Ash Wednesday, after Whitsunday, and after 14 September (Exaltation of the Cross). The purpose of their introduction, besides the general one intended by all prayer and fasting, was to thank God for the gifts of nature, to teach men to make use of them in moderation, and to assist the needy." (New Advent)

At the turn of every season, at specified times, we Catholics give thanks to God in prayer and fasting for His goodness and bounty by commemorating with the Communion of Saints Jesus' Passion. Or at least ... we used to do this. It is now lost to antiquity, until the knowledge is regained. I read about these (until now) mysterious Ember Days and was shocked that our modern Church Fathers took this patrimony away from us. It angers me greatly, this and all other similar treasures taken away so that only through committed effort, alone, can we rejoin our heritage with the Saints.

We should be angry at the violence of the theft of what is ours by those who should have known better. But we should be thankful to God and His Saints for remaining true and solid and forever available to those who earnestly seek him.